Influence of individual and combined health behaviors on total and cause-specific mortality in men and women: the United Kingdom health and lifestyle survey. (Kvaavik et al., 2010 Archives of Internal Medicine)

The United Kingdom Health and Lifestyle Survey looked at the relationship between mortality and the following four variables:

Importantly, the analysis was designed to specifically address poor behaviors; it wasn’t how many vegetables you ate; it’s whether you eat more or less than 3 servings per day.  This simplifies things statistically, but it kind of excludes healthy people.  In other words, this study cannot tell you if 8 servings of veggies per day are better than 5 (a question that would be relevant to healthy people), it can only tell you if it’s bad to have less than 3 (a question that’s really only relevant to unhealthy people).  And this study says nothing about ‘what’s the worst thing for you;’ keep in mind that it only says how bad for you are those 4 pre-specified variables.

Pretty much, the whole story is summarized in Table 1.

The hazard ratio is calculated as follows: take the first group, smoking, “never smokers.” Of the 1,591 people who never smoked, 214 died during the study.  The rate of death among never smokers is therefore: 214 / 1591 = 0.13.  Of the 2,124 people who were current smokers when the study began, 497 died.  The death rate for smokers is 497 / 2124 = 0.23.  The hazard ratio for smoking is 0.13 / 0.23 = 1.74; current smokers had 74% increased risk of dying compared to never smokers.  For former smokers, the risk was actually much worse; they had a 134% increased risk of dying.  NOTE: that is not because quitting smoking is bad for you.  Former smokers have already done a lot of damage to their health by smoking, and smokers who are very sick are very likely quit smoking but are also still very likely to die.  These are correlations not causations.   In any case, the reason why my numbers don’t match the table is because their data are “statistically adjusted.”

Going by their hazard ratios, of the 4 poor habits in question, being a current smoker is the worst (83% increased risk of dying compared to never smokers).  In terms of mortality risk, smoking is worse than regularly drinking in excess, getting less than 15 minutes of physical activity per week, and eating zero fruits or vegetables.  Nutrition is important, but not as important as not smoking.

The next worst factor was getting less than 15 minutes of physical activity per week. OK, so nutrition is important, just not as important as exercise and not smoking.  Actually, their nutrition variable had pretty much no significant correlation with all-cause mortality.

Moving on, Table 2. All cause and cause specific mortality

So if someone has all 4 poor behaviors, they should 1) stop smoking, 2) exercise just a little bit, 3) drink less alcohol, and 4) eat more fruits and vegetables.  If they only have 1 poor behavior it doesn’t really matter that much.

IMHO if someone asked what I considered a poor nutrition behavior, it wouldn’t be “too few fruits and vegetables.” People don’t get sick because of eating too few of anything, they get sick from eating too much.  I would have said a poor nutrition behavior is something like “> 3 servings of processed foods per day” or “too much damn sugar” because obesity and obesity-related disorders are the number one causes of death and those two behaviors do far more harm than fruit does good.  (too much processed foods and sugars can cause obesity; too little fruit cannot)

jump back over the pond to:  Risk Factors for Mortality in the Nurses’ Health Study: A Competing Risks Analysis (Baer et al., 2010 American Journal of Epidemiology)

The Nurses’ Health Study is one of the biggest epidemiological investigations of all time.  This study included young and middle aged nurses who completed multiple questionnaires about diet and lifestyle in 1980, 1984, and 1986. 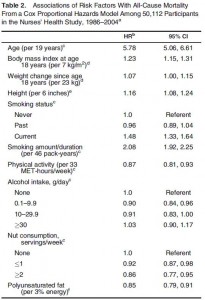 The basic outline is similar to the UK study, and according to the table above, smoking triumphed again as the worst.  But wait, table 2 continued:

A Ha! diabetes is worse than smoking.

So perhaps eating more than 3 servings of vegetables per day isn’t as good as never smoking, but being diabetes-free is the best.  However, there is one important caveat.  This view of the data doesn’t exclude a relatively extreme interpretation.  I.e., eat as much junk food as you’d like and as long as you don’t develop diabetes, your lifespan won’t be affected.  A better interpretation needs to exclude that possibility because, unfortunately, people cannot eat as much junk food as they’d like and not get diabetes.

“glycemic load”  shows a pretty good correlation with all-cause mortality.  Glycemic load is basically how much your diet increases your blood sugar.

Glycemic load is increased by:

1)       eating a greater quantity carbohydrates; or

the 800 pound gorilla, no pun intended..  is it too much of a stretch to say your best chance of dying is:

more thoughts about the data: Having a drink a day (~10% reduced risk vs. teatotallers) or getting a little bit of exercise (13% reduced risk) were good for you, but not good enough to compensate for smoking (>100% increased risk) or a carbohydrate-rich diet (22% increased risk due to glycemic load; >100% increased risk for diabetes).  I’m usually very nutritionally biased; for example, the cause of everything can be traced to nutrition.  In the UK study they didn’t ask about glycemic load or diabetes, but they said smoking carried the greatest risk for all-cause mortality.  In the Nurses’ Health Study, smoking was bad but diabetes was worse.  I imagine the findings about diabetes would have been similar in the UK study had they asked.  So my conclusion from these studies is that the universal order of things (or just how the majority of us will go) is most likely: “glycemic load –> diabetes –> mortality”

One more study, from the National Center for Health Statistics

Briefly, these authors made a death-rank chart to display the 12 quantitatively biggest contributors to mortality in the United States.  Nutrition isn’t number one, but it did capture ~10 of the top 12.