it appears that the time for the indirect pathway for glycogen synthesis may finally be here.  Or perhaps it is insulin’s peripheral anti-gluconeogenic actions.

Insulin stimulates glucose clearance but also suppresses glucagon.   b-cells surround the capillaries within pancreatic islets; blood flows through the b-cells first than through the a-cells.  So if glucose is high, it triggers insulin release from the b-cells, which then bathes the a-cells and inhibits glucagon.

Glucagon is a counter-regulatory hormone, i.e., it acts to increase blood glucose.  If you asked me before reading this paper, I would have said glucagon is important in fasting; necessary to maintain blood glucose at a level compatible with brain glucose uptake.  How?  By stimulating hepatic glucose production (glycogenolysis and gluconeogenesis).  That’s all.  After a carbohydrate containing meal, there’s less need for hepatic glucose production (HGP), so insulin inhibits glucagon.  After a high protein meal, maybe you still get a little bit of glucagon to help with excess amino acids.  End of story.

There were four important groups of mice: 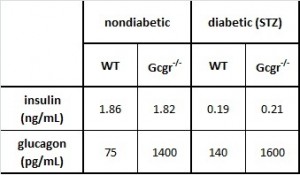 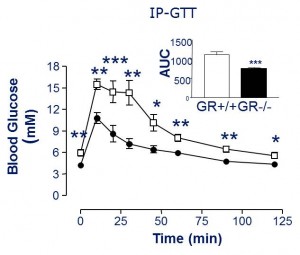 Back to the data.  Rodent adipose tissue physiology 101: 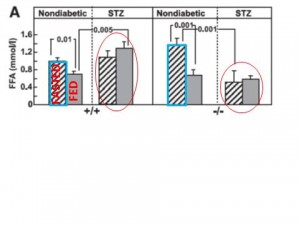 2nd panel: STZ (type I diabetic).  No insulin, so no change in FFA levels after feeding.

4th panel: STZ Gcgr-/-
1) Reduced fasting FFA compared to WT STZ, suggests a lipolytic role for glucagon, but why is this restricted to STZ mice?  2) No effect of feeding on FFAs because no insulin (just like in WT mice)

A lipolytic role for glucagon is confirmed by comparing the bars circled in red.

Compare the fasted to fed columns in each panel: all four panels are in accord with what we know about the anti-lipolytic effects of insulin.

Not sure why fasting FFAs are lower in STZ Gcgr-/- compared to nondiabetic Gcgr-/-.  Any ideas? 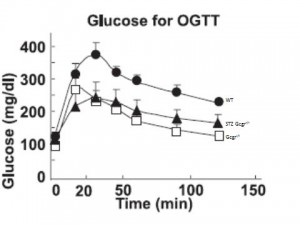 This suggests that glucagon causes postprandial hyperglycemia and the primary role for insulin is to suppress glucagon (as opposed to facilitate glucose uptake in muscle, for example).  In other words, without glucagon driving up hepatic glucose production (HGP), there won’t be high postprandial glucose, and therefore it doesn’t matter if insulin is present.

Where does the dietary glucose go?  Probably not so much into muscle because there’s no insulin (there is still controversy, but there is evidence that insulin signaling in muscle is important for glucose tolerance; see MIRKO mice , although this isn’t entirely clear).

So, to recap:  1) In the absence of glucagon, oral glucose tolerance is normal because there is no great stimulus for HGP; insulin is dispensable.     2) Point #1 is supported because without insulin, oral glucose tolerance is normal as long as there is no great push on HGP (i.e., STZ Gcgr-/-).     3) If glucagon is present, then insulin decreases glycemia by inhibiting glucagon which reduces HGP.  If glucagon is absent, then insulin is not necessary because the liver takes up more of the dietary glucose.  Clear as an unmuddied lake.

OK, like John Dewey now, in the normal situation: dietary glucose is absorbed but glucagon inhibits it from entering the liver at first, so the dietary glucose adds to the glucose produced via gluconeogenesis/ glycogenolysis causing a high peak in blood glucose.  Insulin inhibits glucagon lowering HGP and blood glucose comes down  (role for insulin signaling in muscle?).    Without glucagon: dietary glucose absorbed and is mainly incorporated into liver glycogen; some gets by but HGP is lower, so the total glucose peak is blunted.  Insulin is unimportant in this model, which is why glucose tolerance is the same in Gcgr-/- and STZ Gcgr-/- mice.

Flashback 1987 – Glucagon levels elevated in lean and obese type II diabetics; maybe this is why they are hyperglycemic?  Less to do with skeletal muscle insulin resistance, more to do with glucagon & HGP?     Reaven et al., 1987 Journal of Clinical Endocrinology and Metabolism 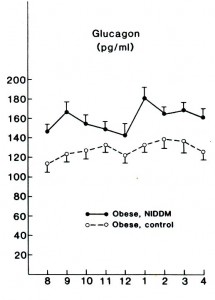 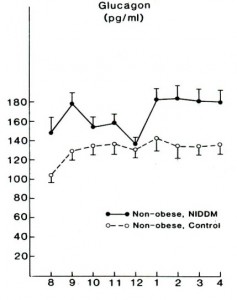 Flashforward 1999 – The almost exact same study was done 10 years ago in humans  (Shah et al., 1999 AJP)  “Impact of lack of suppression of glucagon on glucose tolerance in humans.”  The authors insisted on using the double negative, which is annoying, so instead of saying “lack of suppression of glucagon,” I refer to this condition as “high glucagon.”

No time for background:  10 healthy patients.  Endogenous insulin and glucagon were inhibited by infusion of somatostatin.  At time zero, glucose infusion begins at a rate designed to mimic a 50 gram oral bolus.  Then they infused either a high dose of insulin to mimic the “nondiabetic” response, or a low dose of insulin to mimic the “diabetic” response.  In each of these conditions, glucagon was either co-infused the entire time (“high glucagon”) or delayed for 2 hours (“suppressed glucagon”). 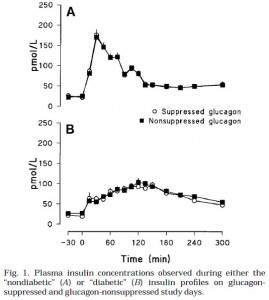 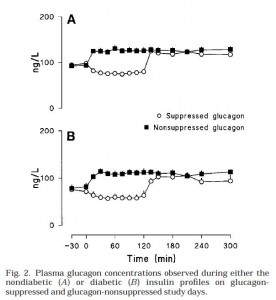 Top graph is nondiabetic, bottom graph is diabetic.  NOTE: Figures 1 and 2 simply reflect the experimentally produced conditions (that is, the infusions), they are not a physiological effect.  Secretion of endogenous insulin and glucagon was inhibited by somatostatin so the only insulin and glucagon in the blood is what the researchers put there.

Then they gave ‘em glucose (Fig 4).  Please just focus on the top graph first.  Here’s what the glucose levels looked like in nondiabetic conditions.  In other words, high insulin [similar to nondiabetic WT (open circles) & Gcgr-/- (closed squares) above]: 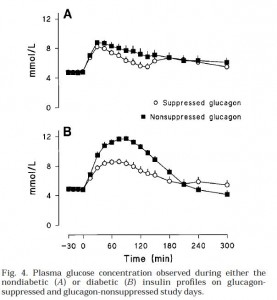 Both Gcgr-/- mice and humans with suppressed glucagon have normal or improved glucose tolerance when insulin is present in nondiabetic doses (top graph).  Now look at the bottom graph; it is what happens in diabetic conditions (just like STZ-treated Gcgr-/- [open circles]; STZ-treated WT mice [closed squares])

We don’t have the data for STZ-treated WT mice, but most assuredly there is higher glucose levels, similar to what is seen in Fig 4B (low insulin, high glucagon [closed squares]).  So glucagon is not bad if insulin is there to defend you (Fig 4A).  Without adequate insulin (Fig 4B), high glucagon causes hyperglycemia.

This was shown to be primarily due to differences hepatic glucose production (Fig 6): 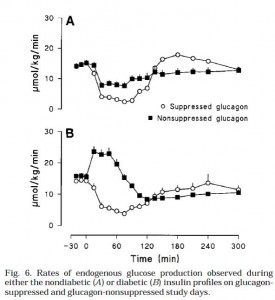 Bottom graph (Fib 6B): (diabetic) insulin is not necessary to repress HGP when glucagon is low (open circles).  But if glucagon levels are high and there is low insulin, HGP is high, causing the hyperglycemia seen in Fig 4B.  Interestingly, with low glucagon (open circles), HGP is suppressed to a similar level by high (top graph) or low (bottom graph) insulin (~5umol/kg/min).  High glucagon is sufficient to cause hyperglycemia.  Is it essential?  So high glucagon is why type II diabetics have postprandial hyperglycemia?  (this seems to downplay the role of skeletal muscle insulin resistance [?])

I think it might, there may be fundamentally important difference.   If it’s how insulin inhibits HGP, then that excludes the possibility that insulin reduces HGP by decreasing amino acid and glycerol release from muscle and adipose, respectively.  It means that insulin acts on the liver, not peripheral tissues, to repress HGP (assuming that in humans, the liver is the major physiological target of glucagon).

But alas! It looks like we won’t be needing to grapple with such questions today.  The researchers found that gluconeogenesis was nearly equally suppressed in all conditions suggesting that the major contributor to glucagon-induced glycemia was glycogenolysis (in this model). 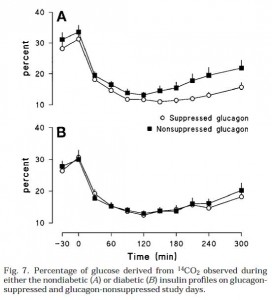