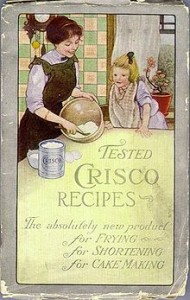 Trans fats are everywhere.  Go to your cupboards, grab any packaged food products like crackers or cereal and you will probably find the words “partially hydrogenated” in the ingredients list.  So, what are trans fats? and how bad are they?

There are two types of fatty acids: saturated (no double bonds) and unsaturated (1 or more double bonds).  Fatty acids can be relatively straight molecules, except double bonds in the “cis” configuration put a “kink” in them.  “Cis” is the opposite of “trans;” saturated fats are neither cis nor trans because they don’t have any double bonds.  See below.

It’s kind of amazing that these molecules are so similar, yet you can eat 150 grams of saturated + cis-unsaturated fat every day and live a long healthy life, or eat 5 grams of trans fats, become obese and die prematurely.

Trans fats start out as liquid cis-unsaturated fats in vegetable oils (e.g., soybean oil, canola oil, etc.).  From a manufacturing standpoint, cis-unsaturated fats are too soft and unstable.  So to put them into foods would result in a messy product that melted at room temperature and then goes rancid.  That is not exactly what you think of when you picture a delicious warm muffin, or some crispy crackers, or an oreo cookie.  Converting cis-unsaturated fats into trans-unsaturated fats is what makes the difference.  Now your favorite processed food products have the perfect consistency, taste delicious, and don’t go stale.  From the perspective of the food company, people will buy more because it tastes better, and they don’t have to worry about it going bad if there is a slump in sales.  Win-win.

Stearic acid is pretty much always solid.  It is found in steak.  Picture the white marbling in a thick cut of beef; it is solid.  Unlike oleic acid, which is found in olive oil.  Olive oil is usually a liquid, but will solidify if you put it in the fridge for a few hours.  Oils high in elaidic acid are almost as solid as stearic acid; elaidic and stearic acids can be solid at body temperature; this is highly favorable for food companies.  That is a key temperature that is important for the deliciousness of processed foods; they melt in your mouth not in your hands

Moving on to the data:  The first paper is another seminal manuscript from the infamous Nurses’ Health Study.  In brief, the Nurses’ Health Study began in the mid-70’s and has been steadily collecting data on over 100,000 women.  This particular analysis includes a sample size of ~80,000 (for the record, that is an enormous amount of people to study). 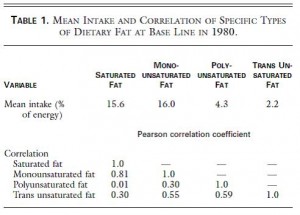 bottom half of the figure “Correlation.”   Trans fat intake correlates better with PUFA & MUFA (0.55 & 0.59) than with SFA (0.30).  This is half expected and half surprising.  It’s half expected because, as stated above, trans fats are unsaturated fats, so by definition if you’re eating more trans fat then you’re eating more unsaturated fats.  It’s half surprising because you might think unhealthy people eat a lot of saturated fat and trans fat, so those two things should correlate well.  But they don’t.  It appears as though there are some people who eat vegetable oils and trans fats while others who eat saturated fats.  There is of course much overlap, but thats the gist of Table 1.

Table 2.  What are people eating?

Back to the half surprising point from above; maybe it should have been only 25% surprising. Healthy people try to avoid both saturated and trans fats, and healthy people who eat the least SFA or trans fat also eat the most fiber (last row in Table 2).  So all those things group together and can be seen in the table.  The advantage of this kind of table is that it independently breaks down each nutrient.  The disadvantage is that sometimes the common sense stuff doesn’t become common sense until you’ve thought about it for a long time, but I guess that’s true with a lot of things.

Moving on, to the bottom half of table 2:

similar trends…  People who eat the least saturated or trans fats also exercise the most, smoke the least, etc.  Where do you fit in?

Below is Table 3 in its entirety, but don’t worry we will not be considering very much of it. 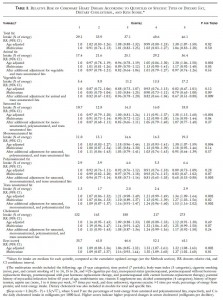 Of all the variables on that table, Trans fats carry the highest relative risk for CHD: 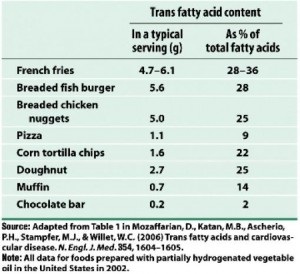 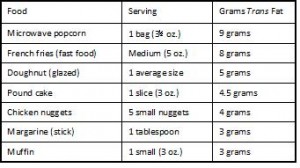 (Note the absence of real food on those two charts)

Back to the data:  Furthermore, the Nurses’ Health Study seems to exonerate saturated fats a little.  The age-adjusted risk for the highest saturated fat intake (18.8% of total calories or 41 grams) compared to the lowest (10.7% or 24 grams per day) is pretty high: 1.38 or 38% greater risk of CHD.  Well, back to that ‘common sense’ theme, unhealthy people eat a lot of saturated fat and trans fats.  Trans fat is the real bad guy, so when the data are controlled for trans fats, the risk of eating a lot of saturated fat completely went away (see red circle).

And the same thing happened to animal fat:

The adjusted risk for eating 36.4% (81 grams) compared to 17.4% (39 grams) of total calories from animal fat is “0.97” which would mean there is a 3% reduced risk for CHD if you ate more animal fats.  BUT the confidence interval includes “1” so there is no statistically significant association.

In the Nurses’ Health Study of ~80,000 women in the United States, CHD risk was not associated with intake of saturated fat, animal fat (or cholesterol), and was significantly associated with trans fat.  My take?  If you are at risk for CHD, avoid trans fats like the plague.  And microwave popcorn. 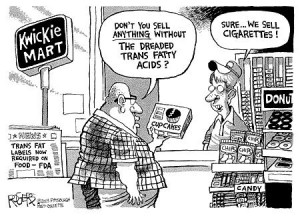