Brown adipose tissue (BAT) has classically been thought of as a thermogenic tissue in rodents, infants, and to a small degree in adults.  BAT is brown because of its rich vascular supply; it’s not a fat storage organ like it’s cousin white adipose tissue.  BAT burns fat and wastes the energy as heat.  Cold temperature activates BAT, which we know is true for humans

The characteristic of BAT introduced in this paper is that of a Hoover sucking lipids out of the blood, but instead of swirling around in the Windtunnel, they are disposed of into a region of space in which nothing, not even light, can escape (except maybe heat).  For those of you at home, this means if you spend the day swimming in a cold pool or the ocean and then consume a fat-rich meal, virtually all of the lipids will be diverted into BAT where much of their energy will be dissipated as heat.

This paper had such an astounding umph…

Below is the profile of plasma lipids from fasted mice at either room temperature (control) or after 24 hours at 4C (39F):

Figure 1a: mice at 22C or 4C.  Cold mice have much lower triacylglycerols (TGs) and moderately lower glycerol.

It’s so early in the post, but here is the gravitas.  The meat and potatoes.  Cold mice experience virtually no lipemic response to an oral bolus of 100uL olive oil. 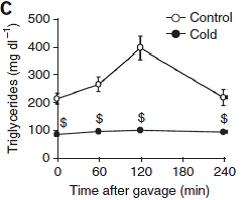 I love the author’s choice of dollar signs to denote statistical significance.

Problem #2.  3H-triolein was mixed in the olive oil, and accordingly plasma 3H rose in parallel with TG’s in control mice.  But plasma 3H also increased in cold mice despite no increase in TGs. 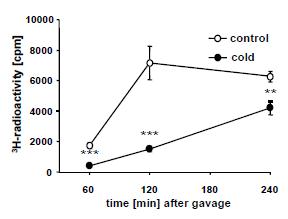 Plasma 3H mirrors TGs in control but not cold mice. 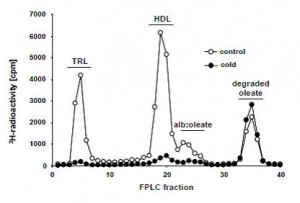 In the controls (normal mice at room temperature, open circles), most of the 3H is recovered in TRLs (chylomicrons and VLDL) and HDL.  The only 3H recovered from the plasma of cold mice was in the flow-through.  For some reason the authors are calling this fraction “degraded oleate,” but in my experience everything that’s left in the sample dumps out together in the end, including free fatty acids. The authors claim this “degraded oleate” is comprised of partially oxidized (chain-shortened) 3H-fatty acids and 3H20, which it could be, but it could also be unmetabolized 3H-oleate.  More importantly, however, is that it was similar in both groups.  So the cold didn’t enhance the appearance of these mysterious 3H molecules.  IOW, there is still a lot of 3H unaccounted for…  So, where did it go?

Figure 1e.  2 hours after the oral gavage, tissues were collected and checked for radioactivity

As expected, liver and muscle took up the most.  Liver should have a higher fractional uptake, but muscle takes up more overall simply because it is a much bigger organ….   Enter: BAT.

Problem #3.  Figure 1e is showing uptake per total tissue, and given the authors claim that both liver and BAT are of equal weight (1.4 grams), that is a ridiculously high fractional uptake in cold BAT.

Suspicions confirmed:  when expressed as fractional uptake, it is ridiculously high in BAT:

Figure s4: As expected, liver is higher than most tissues, except for BAT, which exhibits a phenomenally high fractional uptake in both control and cold mice.  If it’s true that BAT really clears more TG than any other tissue, even at room temperature, then I learned something shocking today.

Problem #5.  Why have I never heard of BAT’s role in clearing chylomicron TGs?

Inconsistency (or Problem #6):  Figure 2d.  Tissue distribution of 3H 15 minutes after i.v. injection of 3H-triolein-labeled chylomicrons.  Note cold liver and BAT are approximately equal at around 5,500 cpm per total tissue. 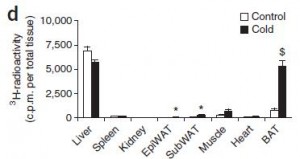 Below, they tested lean and obese mice in the same type of experiment: 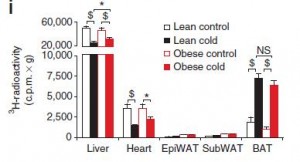 Figure 4i.  Cold liver is about 3x higher than cold BAT.  The units are different, first experiment is cpm per total tissue, second is cpm per gram (“c.p.m. x g” ?) or fractional uptake… but from the first two figures 1e & s4, total and fractional uptake is higher in BAT than liver.  Why is this result flipped around?  Actually, the values for BAT are pretty much the same in both experiments.  But the value for liver is almost 10x higher when corrected for the “weight of the excised tissue.”  The experiment was the same, the data are expressed differently (which is OK), but the results seem different.

Moving on.  Maybe I’m just nit-picking but there are definitely some anomalies that warranted at least a brief mention.  For example,

1. what are those tritiated molecules that are lurking in the cold plasma (figure s2)?

It’s not exclusively “degraded oleate” (whatever that means).  Perhaps some of it is degraded oleate, of which 3H20 and chain-shortened 3H-fatty acids are possibilities, but it could also be native 3H-oleate (or 3H-di- or mono-acylglycerol?).

2. In what form is the 3H remaining in BAT after 15 minutes?  I suspect it is 3H-fatty acids (but from other data they present it could actually be intact 3H-triolein). 15 minutes is too soon for the bulk of it to be 3H2O, which would reflect an extremely high fatty acid rate considering the position of the label is [9,10-3H]oleate.

3. And WHAT about at 2 hours??? 2 hours is way too long for any of the 3H to still be in fatty acids, 15 minutes maybe, but 2 hours? This is BAT after all, isn’t it supposed to be oxidative especially at 4C?

3a. It shouldn’t be 3H2O either because water doesn’t accumulate inside of adipose tissue of any color.

3b. Membranes?  But why would BAT suck fat out of the blood membranes remodeling (especially when it’s so cold!)

4. Does BAT really weigh as much as liver?  Given their densities, this would mean the brown adipose tissue depot is significantly larger than the liver.  It seems like these guys would be walking around with little humpbacks (like a camel), especially after a bolus of olive oil in the cold!

Anyway, the data are staring me straight in the face, but I’m still having trouble swallowing this new characteristic of BAT.  In the meantime, flashback 1957:

TISSUE DISTRIBUTION OF C14 AFTER THE INTRAVENOUS INJECTION OF LABELED CHYLOMICRONS AND UNESTERIFIED FATTY ACIDS IN THE RAT (Bragdon et al., 1958 JCI)

The fate of 14C from [14C]palmitate-labeled chylomicrons in rats.  The time point in this study is 10 minutes; in the Bartelt BAT study above it was 15 minutes, but that shouldn’t matter too much. 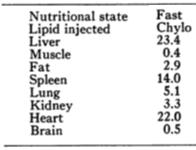 Uptake per gram of tissue (fractional uptake).  These results are drastically different than Bartelt’s.  Liver, heart, and spleen exhibit the highest fractional uptake.  In Bartelt’s figure 4i it’s all liver.  Is this difference due to a rat/mouse thing? 10 vs. 15 minutes?  In any case, both papers agree that a lot of dietary fat/chylomicron-fatty acids end up in the liver.  In mice, maybe it’s liver and BAT, in cold mice maybe it’s all BAT, but in rats maybe it’s liver, heart, and spleen.

In humans, at least from one paper, it seems like fractional TG/FA uptake is approximately equal in fat and muscle (in agreement with mice but not rats where fat takes way more than muscle).

This study utilized the arterio-venous balance technique to measure the fractional uptake of [U-13C]palmitate from a mixed meal across subcutaneous stomach fat and a forearm muscle.  However, in Frayn’s Biochemistry textbook adipose is said to take up 4-5 times more than muscle overall which is more on par with the mice and rats cited above.

And in this rat study, whole tissue adipose uptake of 14C-oleate was higher than muscle and liver at 2 hours: Trafficking of dietary oleic, linolenic, and stearic acids in fasted or fed lean rats. (Besseson et al., 2000 AJP) 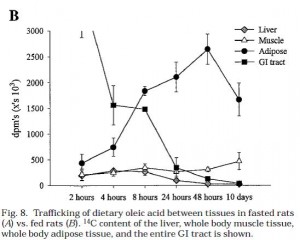 I guess I’m just trying to keep my mind off of the whole BAT thing.  Come to think of it, I’ll just do the experiment myself (in mice) to see if BAT really plays such a large role in TG clearance.  will post the results.