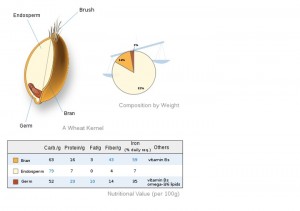 Grains are made of bran, germ, and endosperm.  Refined grains are endosperm only (GLUTEN and starch). 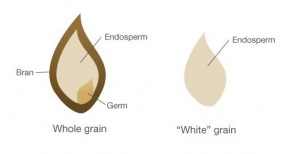 Germ is the embryo.  Bran is the shell, lots of fiber & vits.  Has unsaturated fatty acids which can go rancid so bran is removed to improve shelf life of refined grains.

Moving on to the data:

Round 1. Grains et al. vs. mortality

The Diet And Reinfarction Trial (DART) is one of the most historically important nutrition INTERVENTION studies.  Intervention studies are where investigators actually go into a population and ask them to change something about their diet; they are intended to determine causation and thus the best advice to give the target population.  The findings from DART, in particular, are crucial & too often ignored.

DART included ~2,000 men, ~56-57 years of age, who recently suffered a heart attack and the intervention was simple.  They were randomly assigned to receive one of three dietary recommendations:

If you’re dispensing nutrition information, then you are intervening just like these researchers.  It stands to reason that the recipients of your advice might respond similar to the DART subjects.  Pay attention.

The fish group increased their fish intake from less than one serving per week on average up to the recommended 2 servings (however, 14%-22% of the patients couldn’t tolerate fish and were allowed to take fish oil capsules instead).  The table is showing EPA as a proxy for fish intake; salmon has about 0.5 – 1 gram per serving.

And the fibre group doubled their cereal fibre (whole grains) intake from 9 up to 19 grams per day. 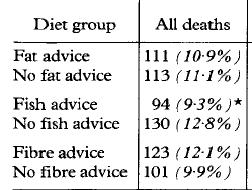 Cereal fibre comes from whole grains, which are different from other fibrous foods like broccoli and spinach.  Cereal fibre, and whole grains in general, are suspect.  These were men in their 50’s who had a heart attack, so the results may not apply to everyone, but there is another way to look at it.  The DART population had two immediately relevant risk factors: age and a cardiovascular event.  I propose cereal fibre may have been simply another insult to their health profile.  IOW, the mortality risk for increasing cereal fibre might be > 22% for a population with more than two risk factors and < 22% for a population with fewer risk factors. IOW, cereal fibre is bad but won’t kill a healthy person.  Indeed, we see this every day; many people who lead a healthy lifestyle consume whole grains and are fine.  Perhaps the whole grains aren’t what is making them healthy.

Another remarkable finding of this study was the effect of increasing fatty fish intake:

The survival curve: the life-saving effect of increased fish intake are almost instantaneous; by 3 months there is already a noticeable reduction in mortality in the fish group.  That is more substantial than what has been shown in any single trial of statin drugs.  Gravitas.

Support for the theory that whole grain consumption is simply a habit of healthy people, not what actually makes them healthy:

This paper includes data from the Health Professionals Follow-Up Study, a huge epidemiological study on food intake data and a variety of endpoints.  HPFS = >50,000, all male doctors, established circa 1986 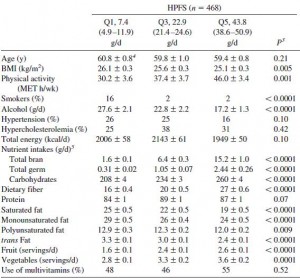 Healthy people eat a lot of whole grains (and exercise more, maintain a healthier body weight, smoke less, eat more fiber, eat less trans fats, and eat more vegetables).  All of those factors are directly correlated with the consumption of whole grains.  IOW, scientifically, this makes it very difficult to differentiate true health-promoting effects of grains because there are a lot of bona fide confounding factors.

3)      There is a good inverse correlation between grains and insulin level, suggesting that grains may actually be healthy and not something that is coincidentally ingested by healthy people; note the high degree of significance (“0.01,” red arrow)

BUT once the data are statistically corrected for confounding lifestyle factors such as smoking, body weight, and exercise, the association between grains and insulin gets weaker (“0.06,” middle row, red arrow)

And when the data are further corrected for confounding lifestyle and dietary factors such as vegetables and sugar, the association is no longer significant (“0.13,” bottom row, red arrow):

So in some cases, like with insulin, high grain intake is most likely a marker for a healthy person; the grains themselves aren’t what makes these people healthy, it is the lifestyle and dietary things that healthy people do.  In hindsight this shouldn’t have been too unexpected, because foods high in grains are carbohydrate-rich, after all, and carbohydrates drive insulin secretion.  So we shouldn’t be terribly surprised that higher carbohydrate consumption is not associated with lower insulin levels.

C-reactive protein (CRP) is a general marker of inflammation and an excellent marker for an assortment of morbidities and mortality… (IMHO CRP a better marker than LDL).

Note the similar trend: There is a strong correlation between CRP and grains (top row, last column, “0.03”).  But the correlation is weakened by controlling for lifestyle factors (middle row, “0.32”) and further weakened by controlling for diet (bottom row, “0.63”).  Thus, while someone who eats a lot of grains also has relatively low systemic inflammation, the grains are most likely not playing a causal role.

So where does this leave us?  The things that were true in 1989 and 2006 are probably still true today.  Eat salmon, not grains.  And fat doesn’t matter.

Will whole grains kill a healthy person?   No.

Same as above, people who eat more whole grains smoke & drink less, exercise more, eat less saturated fat; all things that are common amongst “healthy” people (but may or may not actually be what is making them healthy).

But to make a long story short:

Hey!! They are the only data I want shown!

This was a much smaller study, but supports the theory that grains may only be detrimental to people with more serious risk factors (like a previous cardiovascular event [e.g., heart attack, etc.]).

DART was an intervention study, and therefore was more powerful and meaningful. The other studies were observational.  Will you still recommend whole grains?