Cribb and Hayes (2006) examined the two extremes of protein consumption: immediately before and after working out (“PRE-POST”) vs. 8 hours before and 8 hours after working out (early morning and late evening; “MOR-EVE”).  Each protein shake contained 40 grams protein, 43 grams glucose, and 7 grams creatine.  The subjects were recreational weight lifters, an interesting choice in terms of data interpretation.  I.e., novices are expected to see much greater gains from beginning a new exercise program than experienced exercisers.  Thus, any difference between the groups is expected to be greater.  For example: compare the difference between 5 and 10 to that of 1 and 2.  The relative difference (2x) is the same in both cases, but the absolute difference between 5 and 10 is significantly greater and thus easier to detect.  This stacked the odds against seeing a difference between treatments.  The advantage is that experienced lifters know how to do a high intensity workout, and the results are applicable to people who already exercise.

Notes on the wonders of energy balance:
The protein shakes added ~272 kcal to their total food intake, which caused them to eat less during the rest of the day.  Interestingly, food intake declined by 74 kcal in the PRE-POST group and over twice as much (172 kcal) in MOR-EVE.  Food intake declined in MOR-EVE because the extra calories were just floating around in the bloodstream and thus available to register lots of “excess energy” to the brain.  But the increase in muscle was 2x greater in PRE-POST than MOR-EVE; thus, the extra calories in PRE-POST were immediately invested in laying down new lean mass and therefore weren’t around to signal “excess energy” to the brain.

energy in energy out is bollocks

How the “energy in” is handled is critically important.  With regard to an energy excess, dessert before bedtime is stored as fat but the same amount of calories from protein before exercise are invested into muscle.

A calorie isn’t a calorie because body composition matters.

In this study, proper protein timing even divested some pre-existing energy from fat mass into new muscle; fat mass and body fat % declined in PRE-POST, reflecting a net fat loss.  This means the signal to synthesize new protein triggered a demand on the energy required to do so that was greater than the amount of calories contained in the protein shake.  Nutrient timing: cool, huh?

An important study by Esmarck (2001) only compared protein ingestion immediately after working out vs. 2 hours later, but as seen in Tipton’s study, the effect of protein ingestion prior to exercise is superior to after exercise.  As seen in the figure below, muscle size (mean fibre area) was significantly increased in the immediately after group, where there was no change if the supplement was delayed by only 2 hours! 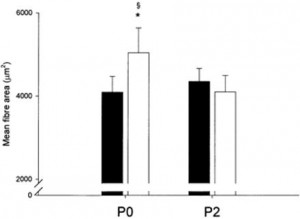 These findings correlate well with an earlier study by Tipton (2001), where muscle amino acid uptake was 2.5x greater in the group who ingested a protein shake immediately after working out relative to those who consumed it only 2 hours later.

Any protein is better than no protein (C & H, 2006), and protein immediately after is superior to 2 hours later (Esmark, 2001; Tipton, 2001).  I am proposing that protein prior to exercise is superior to protein after after.

Tipton (2007) later compared protein consumed immediately before vs. immediately after resistance exercise and showed that muscle amino acid uptake was over 2 times greater in the former… I wonder why… 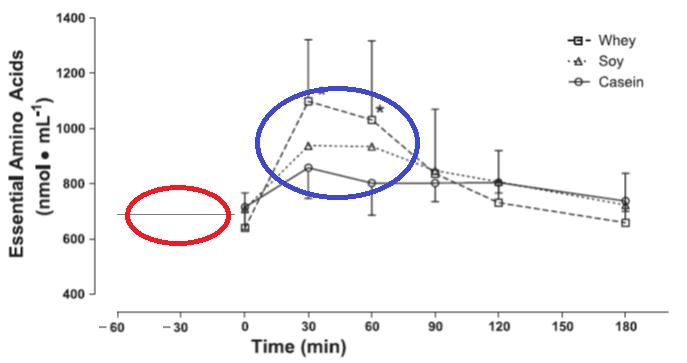 Would you rather have 700 uM or > 1000 uM amino acids in your bloodstream to feed your contracting muscles during exercise?

When you’re working out, your muscles are contracting fast and strong and need fuel.  It will tap into its own fuel reserves but that = protein degradation: 1) it’s better to have a fresh supply of diet-derived amino acids to blunt this and counter it by stimulating new protein synthesis (signaled by an influx of amino acids).  Insulin’s anabolic effect during exercise will be completely absent if you’re exercising in a fasted state (not a good idea if you want to build muscle).  And 2) contracting muscles hijack a blood supply: this selectively directs some of that 1000 uM of protein-derived amino acids into contracting muscles, and uses a lot of energy in the process of protein synthesis (i.e., Cribb and Hayes, 2006).  The exercise-induced increased blood flow to muscles explains Tipton’s 2007 findings.  Protein ingestion at other times allows the amino acids to be used for a variety of other purposes instead of selectively supporting the muscles that are contracting.

The necessity of protein supplementation during a workout regimen is not be a matter of debate.  And it doesn’t have to be whey protein isolate

; it can be eggs or a steak (personally, I find protein shakes

Conclusion: to get the best bang for your buck, optimize exercise-induced improvements in strength, fitness, and body composition with nutrient timing, i.e., pre-workout protein/meal ingestion.  I’m not trying to cut corners here… OK, well maybe I am.  But you’ve still got to work hard.  So unless you’ve got a soft stomach, try a pre-workout meal (OK, it can be a protein shake).