These nutters ate only meat for a year. Place your bets!

Who defines “moderation,” anyway?  An homage to pioneering nutrition research III, Op. 100.  Keep an open mind!  (and remember these words: “no clinical evidence of vitamin deficiency was noted.”) 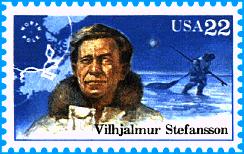 MY LIFE WITH THE ESKIMO

The effects on human beings of a twelve months’ exclusive meat diet (Lieb, 1929)

Prolonged meat diets with a study of kidney function and ketosis (McClellan and Du Bois, 1930)

Vilhjalmur Stefansson traveled with Eskimos in the Arctic for 9 years and lived almost exclusively on meat.  Then he and a fellow expeditioner (Andersen) decided to recapitulate this in a well-controlled, albeit warmer (New York), laboratory setting so they could document the metabolic insanity that ensued. At the time, the Eskimo diet was moderate protein, very high fat, yet they had no heart or kidney problems, were glucose tolerant, and exhibited no signs of ketoacidosis.  So the scientists said: “why not?”  (they were really hoping this apparent healthiness wasn’t due to the frigid Arctic temperatures.)

The studies describe the Central Plains’ Indians who subsisted almost entirely of buffalo meat, which they called the “staff of life,” and South American tribes which eat solely beef and water, then go on to say [sic]: “All of these races are noted for their endurance of exertion and hardships.”  They cite two tribes of Eskimos:  Greenlanders, who ate the typical diet (described above) and showed no signs of rickets or scurvey; and the Labradors, who had both diseases but ate more potatoes, flour, and cereals.  While traversing the Arctic, Andersen developed scurvy at a time when he was eating canned foods and very little meat; this was immediately cured by with raw meat :/

Food for thought: this diet is seriously deficient in vitamin C by today’s standards, but they exhibited NO symptoms.  Perhaps vitamin requirements vary based on the background diet?  Maybe our vitamin C requirement is increased by a Western diet (>50% carbs and lots of vegetable oils).  just sayin’

Our hero, Stefansson, was 48 and healthy:

The scientists who oversaw the study recommended lean meats at first, but this led to nausea and diarrhea after only 3 days and was completely reversed by the addition of fattier cuts.  Try subsisting exclusively on lean chicken breasts;  I probably wouldn’t make it past lunch.

For over one full year, they ate:

Their only carbs came from the “glycogen of the meat!”  priceless.   All in all, they ate ~17% protein, 81% fat, and 1% carbs (an ultra-low carb version of the Atkins diet).  When the rare digestive issue arose, it was quickly and effectively remediated by upping the consumption of fattier meats.  Sample menu:

The marrow and a lot of the meat was eaten raw.  After 1 full year of this,

What about the allegeded acidic/ anti-alkaline effects of meat?  Homeostasis, my friends.

So they were obviously sneaking out to snack on fruits and vegetables.  That’s the only way they could be vitamin sufficient, right?  Nope.  They stuck to the diets, we know this because: 1) they ate most of their meals in the lab (i.e., visual confirmation); 2) ketonuria was present the entire time (confirmation of the high fat and low carb intake); but most importantly, 3)

Did they suffer heart attacks, stroke out, or experience any of the other malevolent effects attributed to red meat?  No.

Andersen’s gingivitis disappeared, and they both lost a few kilos to boot.  Stefansson’s blood pressure remained a pristine 105/70 the entire time, while Andersen’s dropped from 140/80 to 120/80.  Hypertension thwarted by an all meat diet, go figure.  And unlike their fellow carnivorous Eskimo friends, Stefansson & Andersen were relatively couch potatoes.  But physical activity tests indicated that these two middle-aged men could still easily run 2 miles in 20 minutes while on this carb-free ultra-high fat diet.  Other random musings: 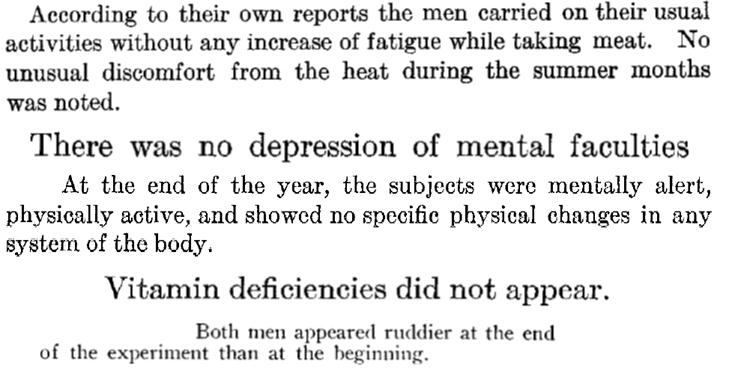 I wouldn’t have guessed “strikingly tanned” could get “ruddier,” but apparently the all meat diet made Andersen’s skin glow.

I advocate a nutrient-rich diet devoid of empty calories, and as such am not unaware of physiological implications of a high fat ketogenic diet.  But I still learned a lot from this classic experiment.  Keep an open mind!  How do YOU define “moderation?”

“adventure is a sign of incompetence” –Stefansson
(I have no idea what that means.)

Check out my Patreon campaign! Five bucks a month for access to all articles. It’s ad-free and you can cancel if it sucks