Kiefer further states “empty* glycogen stores also seem to have no bearing on resistance training’s ability to stimulate muscle growth, and might be advantageous for accelerated fat loss.”

“…any differences in basal transcription are completely abolished after a single bout of heavy resistance training. We conclude that commencing resistance exercise with low muscle glycogen does not enhance the activity of genes implicated in promoting hypertrophy.” 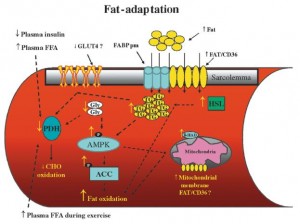 This review article supports increased 24-hour fat oxidation induced by glycogen depletion and fat adaptation, but in the context of endurance training (low intensity; ie, not conducive to muscle hypertrophy)… the authors even speculate a negative impact on high intensity performance, although this would be less relevant in the context of ketoadaptation (which isn’t mentioned).

Thus, he concludes [rightfully, imo]: “glycogen depletion won’t hold us back during low-carb training.”  And furthermore, “a combination of enhancements to the CNS and sympathetic nervous system create [this effect]; enhancements that may be more of a result of the absence of carbs rather than the addition of added fat and protein for fuel.”

…I don’t disagree with this particular effect – yes, it seems specific to glycogen depletion – however, when it comes to body composition, nutrient partitioning, and physical performance, dietary protein shouldn’t be discounted.

“glycogen depletion… does not influence the shift in the EMG frequency distribution [during exercise].”  In this context, EMG reflects the rate of ATP hydrolysis and electrical activation in muscle, and is proportional to force production.  This suggests that any theoretical decrease in muscular force production induced by glycogen depletion may be adequately compensated by increased sympathetic activation.

Moving on: “Whenever you train, your body releases catecholamines, which increases fatty acid release, energy production, and strength. The response of your muscular system depends on how much adrenaline is present, how fast it’s released and how sensitive cells are to adrenaline.  Going low-carb does something to intensify each of these components.”  Truth.

The effect of a low-carbohydrate diet on performance, hormonal, and metabolic responses to a 30-s bout of supramaximal exercise (Langfort et al., 1997)

“The main conclusions of this study are: (1) a low carb diet is detrimental to anaerobic work capacity, possibly because of a reduced muscle glycogen store and decreased rate of glycolysis; (2) reduced carb intake for 3 days enhances activity of the sympathoadrenal system at rest and after exercise.” 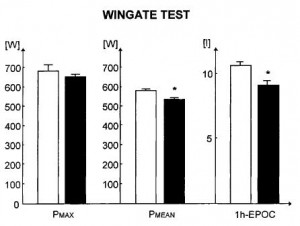 Max power output wasn’t affected, but mean power output was lower.  This is likely due to the fact that the intervention only lasted 3 days – not nearly long enough for ketoadaptation… more likely, they weren’t able to match the energetic demands due to inadequate mitochondrial proliferation. 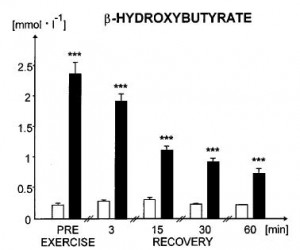 This has been well-established, and is likely due to glycogen depletion (not necessarily exercising in the fasted state per se).

The effect of low-carbohydrate diet on the pattern of hormonal changes during incremental, graded exercise in young men (Langfort et al., 2001)

“It is concluded that restriction of carb intake does not affect the pattern of changes in plasma adrenaline, growth hormone, and testosterone during graded exercise but lowers norepinephrine threshold, indicating increased sensitivity of the sympathetic nervous system to exercise stimulus.”

3 days of carb-restriction increased the lactate threshold, possibly due reduced muscle glycogen and increased reliance on fat-derived fuels, although it also lowered the ammonia threshold.  This might not bode well because one potential source of increased ammonia is skeletal muscle proteolysis, which would suggest increased amino acid oxidation.  This is also one of the reasons I advocate a pre-workout, protein-rich meal… to prevent the loss of lean mass.

“Stimulation of the sympatho-adrenal system, and cortisol secretion with reduced plasma insulin concentration seem to be of importance for preservation of working capacity.”

“In conclusion, sympathetic activity to endurance exercise during which blood sugar was kept over a preexercise level was elevated more in the low than in the high carb diet. It was suggested that the more elevated sympathetic nervous activity would have resulted from glycogen depletion in the working muscle due to the low carb diet and would have increased FFA mobilization from the adipose tissue.”

“Our results indicate that prior fasting may stimulate the intramyocellular anabolic response to ingestion of a carbohydrate/protein/leucine mixture following a heavy resistance training session.”

1) a lot of the theoretical benefits of resistance exercise in the fasted state seem to be due to glycogen depletion, which would be similar on a low carb diet sans carb-loading.

2) another aspect of this, as it pertains to morning exercise, is dinner.  CBL proper promotes a high glycemic dinner, which enhances the insulinemic response to any breakfast.  This is likely true (eg, Wolever 1998 & Nilsson 2008), and is why CBL also promotes skipping breakfast.  Damage control.

Save that insulin hypersecretion until after the morning exercise session, when tendency to store fat is blunted (by exercise).  More damage control… but this wouldn’t be an issue if you didn’t carb-load the night before.

My thoughts on this: a high glycemic dinner in the absence of PM exercise isn’t one of CBL’s strongest or more sensical points; and if a post-workout insulin spike is really critical here, I’d rather see it accomplished with something like protein

, or even a baked potato (ie, not pizza and ice cream).  Also, the frequent carb-loading aspect of CBL contradicts the enhanced sympathetic nervous system activation induced by exercising in the glycogen-depleted state (regardless of exercise timing).  One alternative to this is less frequent carb-loads (as in Kiefer’s Carb Nite Solution

); ymmv, and probably depends on training frequency and intensity…

I’m convinced there are benefits to exercising in the fasted state [in the context of a low carb diet], which appear to be at least partially due to glycogen depletion… and many of these same benefits might be negated by carb-loading.  Theoretically, however, they can still be had by following a relatively low carb template and resistance exercise in the fasted state sans carb-loading.

Instead of enhancing post-workout insulinemia with a high glycemic index carb load, a mixed meal higher in protein may work just as well or even better, in some contexts…  and I see little benefit to PM carb-loading prior to an AM exercise session, fasted or otherwise (John Kiefer begs to differ).  If you must combine carb-loading with fasted-exercise, then probably best to do them close together, chronologically (ie, damage control).  It’s still up for debate whether doing this in the morning or evening is superior, but as mentioned previously, the circadian regulation of adipose and skeletal muscle biology predicts morning may be optimal (despite being inconvenient).  Also, as Jack Kruse mentions in Epi-paleo Rx

, going to the gym at night, with loud music blaring and bright lights blazing, doesn’t bode well for sleep quality and circadian rhythms.  So there’s that.