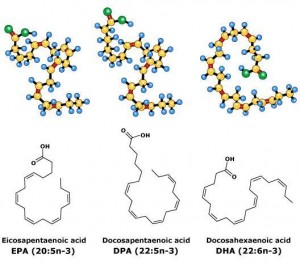 But then there’s this: pre-treatment of hepatocytes with EPA enhances lipid peroxidation and alcohol-induced oxidative stress (Aliche-Djoudi et al., 2011): 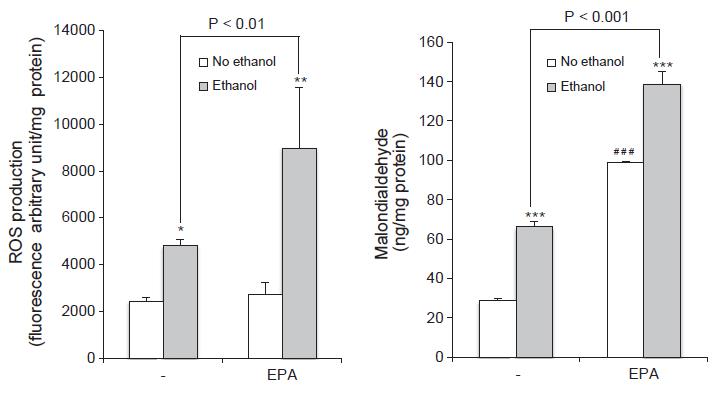 This isn’t *too* surprising because, after all, EPA is more unsaturated than linoleate and linoleate does no favors for the livers of alcohol-fed rodents.  Saturated fats, on the other hand, provide robust protection (eg, Zhong et al., 2013 [cocoa butter

However, pre-treatment of hepatocytes with DHA had the opposite effect; nearly completely suppressed alcohol-induced damage (Aliche-Djoudi et al., 2013):

DHA is more unsaturated than EPA.  If the mechanism was related to the degree of unsaturation or peroxidizability, then DHA should’ve fared worse than EPA.  In both cases, the authors chalked it up to lipid rafts.  This could be considered good news for fish lovers, as DHA is naturally higher than EPA in salmon, for example, and to a lesser degree in sardines and oysters.

Despite all the differences between EPA

mentioned above, I found this discrepancy odd.  However, one human epi study showed that DHA enhanced the protective effect of EPA in NAFLD (Oya et al., 2010), which, worded another way could indirectly support these findings.

Perhaps this is due to DHA’s peroxisomal bias whereas EPA favors mitochondria? (eg, Willumsen et al., 1993 & Madsen et al., 1999).  DHA is also more likely to end up in phospholipids than EPA; this may impact membrane fluidity… but as to why there’s such a sharp contrast on alcohol-fed rat livers… I don’t know.

(eg, You et al., 2008 & Lieber et al., 2008).
Dark chocolate to saturate your lipid membranes.
Salmon/DHA? DHA can be retroconverted to EPA in vivo, but how this would play out in the above scenario is unknown (to me). The one human study suggests a net positive effect.
Bonus: Brussels sprouts & asparagus (Ronis et al., 2005).