… all have one thing in common: some degree of carbohydrate restriction.

Low, lower, lowest: does it matter?

There are 4 relatively large, randomized ‘diet-induced weight loss’ studies that all reported fairly comprehensive food intake and body composition data. The studies ranged in duration from 24 weeks to one year and included anywhere between 50 and ~300 overweight and obese participants.

In general, participants assigned to the low fat intervention were advised to restrict calories and fat whereas those assigned to low carb were told they could eat as much as they wanted as long as it wasn’t carbs.

Your mileage may vary – but these studies cover a large number of subjects from a wide range of backgrounds, suggesting the results might be applicable across the board.  Conclusion?  the amount of body fat lost was much more strongly associated with the reduction in carbohydrates than calories.  The only modestly surprising aspect was the magnitude… (see the figures below).

The four studies, in chronological order:

Plotting all of the data together yields a rather poor relationship between calorie intake and weight loss: 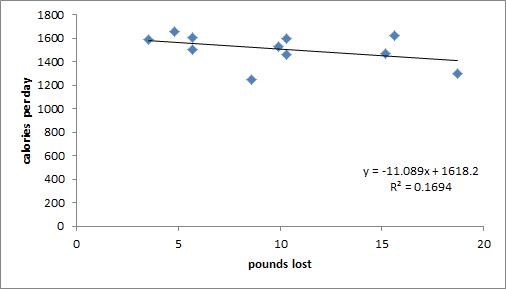 And the picture doesn’t change much if body weight is replaced by fat mass: 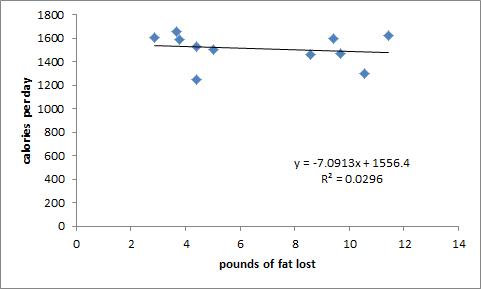 However, if calories are replaced by carbohydrates, the association is much stronger: 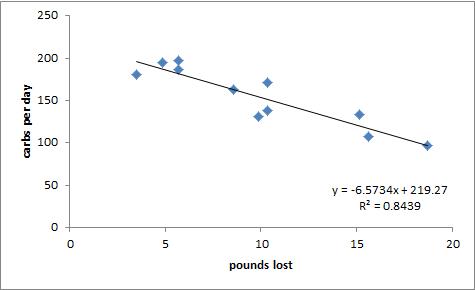 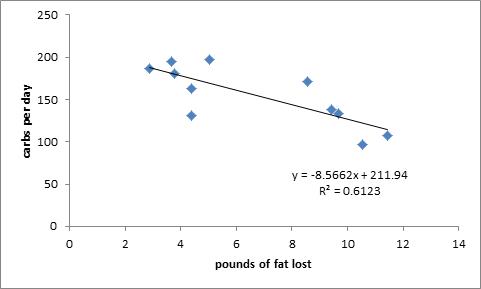 “those assigned to low carb were told they could eat as much as they wanted as long as it wasn’t carbs.”

1. Carbohydrate restriction is almost always accompanied by a spontaneous reduction in appetite; “ad lib” low carb works very well for obese patients.  Once a reduced body weight is achieved, “ad lib” may not work so well as evidenced by near universal weight regain (regardless of diet).

The Laws of Energy Balance.  They work.