“Desynchronization between the central and peripheral clocks by, for instance, altered timing of food intake, can lead to uncoupling of peripheral clocks from the central pacemaker and is, in humans, related to the development of metabolic disorders, including obesity and type 2 diabetes.”

If you haven’t been following along, a few papers came out recently which dissect this aspect of circadian rhythms — setting the central vs. peripheral clocks.

In brief (1):  Central rhythms are set, in part, by a “light-entrainable oscillator (LEO),” located in the brain.  In this case, the zeitgeber is LIGHT.

Peripheral rhythms are controlled both by the brain, and the “food-entrainable oscillator (FEO),” which is reflected in just about every tissue in the body – and is differentially regulated in most tissues. In this case, the zeitgeber is FOOD.

In brief (2):  Bright light in the morning starts the LEO, and one readout is “dim-light melatonin onset (DLMO),” or melatonin secretion in the evening. Note the importance of timing (bright light *in the morning*) – if bright light occurs later in the day, DLMO is blunted: no bueno.

Morning bright light and breakfast (FEO) kickstart peripheral circadian rhythms, and one readout is diurnal regulation of known circadian genes in the periphery.  This happens differently (almost predictably) in different tissues: liver, a tissue which is highly involved in the processing of food, is rapidly entrained by food intake, whereas lung is slower.

Exhibit A. The world’s most obvious study: regulation of the central pacemaker and its impact on circadian phase (Burke et al., 2013). 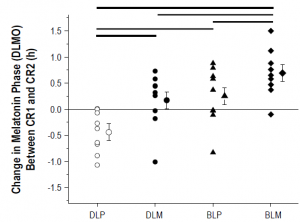 Optional background reading on the role of diet in controlling circadian phase.

Exhibit B. One of the most popular studies on circadian biology this year (Chang et al., 2014)

Night time exposure to artificial light, smart phones, laptops, computers, TV, etc. knocks the wind out of the central pacemaker.  It is the antithesis of bright light exposure in the morning.

These researchers gave their participants a paperback book or an e-Book (eg, Kindle or smart phone) to read in bed at night.

This study garnered almost as many headlines as the e-Book study, but I think it was somewhat misinterpreted (surprise, surprise).  As mentioned above, DLMO is a readout of circadian phase and a healthy central pacemaker.

They showed that, interestingly, a cortisol spike in the afternoon didn’t feed back into the central pacemaker (ie, there was no change in DLMO), but did feed forward into the peripheral clock.  Eating breakfast in the morning is a  [better*] way to entrain the peripheral circadian clock.  I say “better” because spiking cortisol in the afternoon was a trick used by the researchers to test the hypothesis, not the physiologically appropriate Cortisol Awakening Response.

“Desynchronization between the central and peripheral clocks by, for instance, altered timing of food intake, can lead to uncoupling of peripheral clocks from the central pacemaker and is, in humans, related to the development of metabolic disorders, including obesity and type 2 diabetes. ” (Oosterman et al., 2014).

Tangents (1): I know what you’re thinking: “Bill-man, some aspects of Low Carb are similar to fasting, like low insulin levels.  Given this, are bacon & eggs really an adequate stimulus for the FEO?”
To which I’d respond: Researchers have been searching for YEARS, for the biological location and/or precise hormonal stimulus that entrains the FEO.
They haven’t found it.
It’s not insulin: FEO is intact in type I diabetes.
Not everything is regulated by insulin.
disappointed?   😛

Tangents (2): Prolonged fasting blunts peripheral circadian rhythms (get it? no food intake, no FEO); thus, if you engage in intermittent fasting, the duration and frequency should be carefully considered.  In this regard, a consistent, regular pattern of intermittent fasting could desynchronize the central and peripheral clocks, depending on the duration and frequency… a crude translation of this: bright light but no food in the morning, combined with the opposite at night = circadian desynchrony via mismatched LEO and FEO.  To be clear, some degree of fasting is probably good for you, but should be timed with darkness, at night (when you should be sleeping or at least winding down; getting ready for bed).

Body temperature is another input into circadian rhythms.  It declines at night. Wanna throw a wrench into this gear?  TEF. (not as bad as artificial light at night, just sayin’)… also, this might be another reason to avoid exercise at night (HT/ Chimbo).

These are not mouse studies!  See the many human studies on circadian desynchrony, discussed here:

People love skipping breakfast and will condemn any science which says this behavior might not be optimal, or just say it doesn’t matter.  I know this.  Sorry.