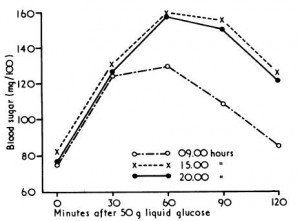 Diabetes Paradox
Interestingly, the circadian variation of skeletal muscle insulin sensitivity is blunted in patients with insulin resistance and/or obesity.  This is known as a “diabetes paradox” in some circles.

Diurnal variation of oral glucose tolerance: a possible pointer to the evolution of diabetes mellitus (Jarrett and Keen, 1969)
“In hyperglycaemic individuals the diurnal variation decreased as the blood sugar levels reached during the morning test increased, so that in a group of grossly hyperglycaemic men the mean morning and afternoon tests were almost identical.” 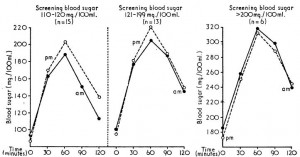 Afternoon Diabetes
Many of us have it to a degree, and one study suggested women may fare worse than men.

Circadian biohack
Collectively, these data suggest that skewing more calories earlier in the day, when insulin sensitivity is high in muscle and low in adipose, bodes better forbody composition and blood glucose control, and this doesn’t work if circadian arrhythmic or insulin resistant.  Get some blue blockers

… they won’t fix everything, but it’s a start.

Part II: impact of circadian mismatched meal timing (I’m honestly nottrying to become the “breakfast [in the morning] guy,” but that seems inevitable.)

Effect of breakfast skipping on diurnal variation of energy metabolism and blood glucose (Kobayashi et al., 2014)
Skipping breakfast resulted in higher 24-hour average blood glucose levels, by 6 points. That’s not a lot, but this was after only one day… and since skipping breakfast is a circadian mismatch, this likely won’t improve over time. Also, are you surprised?  Skeletal muscle is naturally more insulin sensitive in the morning; this is a good time to eat.

Acute effect of late evening meal on diurnal variation of blood glucose and energy metabolism (Sato et al., 2011)
“The present study under controlled sedentary condition supports the notion that a single late evening meal enhances 24-hour average blood glucose by 4 points.”  That’s not a lot, but this was after only one day… and since late night eating is a circadian mismatch, this likely won’t improve over time. Also, are you surprised?  Skeletal muscle is naturally more insulin resistant in the evening; not a good time to carb-load.

The second-meal phenomenon is associated with enhanced muscle glycogen storage in humans (Jovanovic et al., 2009)
“The rise in plasma glucose after lunch was significantly less if breakfast had been taken, despite comparable insulin responses.” In circadian biology, there’s talk of a food-entrainable oscillator (FEO); kind-of-like the importance of timing of light exposure (LEO), meal timing is also important.  Breakfast [in the morning] seems like the optimal time to kickstart the FEO.

Collectively, these studies confirm that eating out of sync, when muscle & adipose are less & more insulin sensitive, respectively, results in elevated blood glucose levels.  Over time, no bueno. 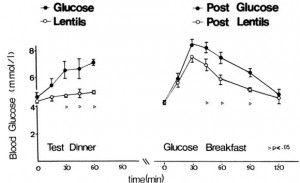 Prospective study of breakfast eating and incident coronary heart disease in a cohort of male US health professionals (Cahill et al., 2013)
Breakfast skippers had a 27% higher relative risk of coronary heart disease, and late-night eaters had a 55% higher risk… I imagine these numbers are so much higher than the 4-6 point increases in blood glucose because this study was over the course of 16 years; the others, 1 day… also, don’t rip off my head for citing an epidemiological study just yet; rationale is further explained below.

Skipping breakfast and late-night carbs cause elevated 24h average blood glucose (Kobayashi, Sato, & Wolever), exaggerated glycemic response to meals (Jovanovic), and are correlated with metabolic deterioration (Cahill).  Given the short-term intervention studies and the sound physiological rationale predicted by circadian biology, I suspect there’s a good deal of causation in that there correlation.

Conclusions
Optimal: eat more when the tissue-specific circadian regulation of insulin sensitivity is high in muscle and low in adipose = earlier in the day.  If circadian mismatched, FIX IT

… these biohacks simply won’t work as well in that condition.

Nutrient timing > CICO.  Period… however, all of this is assuming a a plant-based, low net carb