Brief refresher: skeletal muscle insulin sensitivity is higher in the morning than in the evening.  Exercise boosts insulin sensitivity selectively in muscle, which is relatively more important in the evening.  Thus, an evening carb-load may benefit from exercise to effectively partition the energy influx into skeletal muscle [and away from adipose tissue].

Summary of Part 1 of my CBL review: studies on nutrient timing sans exercise aren’t entirely consistent, in part, due to reciprocal regulation of insulin sensitivity in skeletal muscle and adipose tissue.  That is, excess energy from an evening carb-load, without the exercise-induced, skeletal muscle-specific boost in insulin sensitivity, may be biased less toward muscle growth and more toward fat storage, because unlike skeletal muscle, the sensitivity of adipose tissue to insulin appears to improve as the day progresses… and without exercise to offset this, as in the studies discussed below, this may lead to suboptimal results.

*one thing Kiefer stressed, and I agree, is that the effects of any given intervention may be population-specific.  For example, he pointed out that diurnal insulin sensitivity is less robust in obese and aged populations.  So if two findings aren’t in full agreement, click the link to the study and check this first… context matters!

Tl;dr: I think high intensity exercise and possibly the time of day it’s performed, and regular bouts of fasting, are important factors that mediate the efficacy of CBL and similar protocols.

To get into this follow-up to Carb Back-Loading and the Circadian Regulation of Metabolism, here’s a quote from “Logic does not apply, Part 2: Breakfast,” an article written by John Kiefer (circa 2010… so whether or not this is still his stance, it’s a good platform to delve into the circadian regulation of nutrient partitioning.)

“If what I assume from the facts is true, then skipping breakfast and eating more food at the end of the day rather than the beginning should lead to more fat loss when trying to lose weight, especially if eating breakfast impairs fat burning for the entire day.

Hold on: there’s more to this story. The researchers also looked at body composition before and after. The morning group lost more weight but lost a lot more muscle and a lot less fat. The night group lost almost exclusively fat and preserved muscle65-69. Who knew, maybe there is something to this science stuff after all?”

disclaimer: these four studies do not comment directly on nutrient partitioning

Jacobs 1975: 3 weeks, ad lib, all food either for breakfast or dinner

The Halberg paper is a rather nice discussion of circadian rhythms and chronobiology, but doesn’t touch on body comp.  And the Sensi paper reported 2 studies, one lasting 3 days and the other 18, with meals given either multiple times per day, only at breakfast, or only at dinner.  No differences in body weight, but higher fat oxidation after dinner (this may have translated to more fat loss had the study gone longer).

Presumably, one of the better chronic feeding studies to show superior body comp results with big dinners over big breakfast is Keim 1997.  The group given 70% of their calories for dinner group experienced greater fat loss and better preservation of lean mass than those given 70% of their calories for breakfast.  However, this study suffered from some design flaws:  it was an unbalanced crossover with no washout period.

Speculation on how the flaws in study design may have impacted the results: the ratio of fat to lean mass loss is higher at the beginning of a diet… and there were more participants in the PM group for the first 6 weeks.  After 6 weeks of hard dieting, loss of lean mass increases… at this point in the study, the group with more participants was switched to AM (with no washout period).  Ergo, more fat loss with PM feeding; more muscle loss with AM feeding.

In another crossover study that suffered from an inadequate washout period (only 5 days), Nonino-Borges showed no difference in the preservation of muscle, but more fat loss in the group given big breakfasts compared to: 1) big dinners; and 2) 5 small meals throughout the day… the results are in agreement with Lombardo, but that doesn’t make this study design any less bollixed.

The next best support for big dinners is Sofer 2012.  This was a pretty good study; they compared a regular calorie restricted diet with an identical one where carbs were given only at dinner.  And this study DID show more fat loss and less muscle loss in the dinner group.  However, the control group in this study was not “breakfast-only,” but rather “carbs 3x per day.”  Therefore, a more appropriate interpretation of the intervention group is “carbs 1x/d.”  In that sense, it could be concluded that yes, carbs restricted to one meal per day might give better results than multiple carb-meals, but this interpretation doesn’t specify which meal (breakfast or dinner).

There is one other study of relevance: Alves 2014.  The participants were assigned to receive most of their carbs with lunch and protein with dinner, or vice versa, and had a control group with macronutrients evenly spaced out.  THIS is what Sofer should’ve done!  The results showed that carbs with lunch and protein with dinner preserved muscle better than any other group.  Nutrient timing had no impact on fat loss in this study.

Collectively, these studies suggest 1 carb meal is better than multiple carb meals (Sofer and Alves), and earlier carb meals are better than later carb meals (Lombardo and Alves) [in the context of no heavy resistance exercise sessions in the evening].  The studies by Keim and Nonino-Borges cancel each other out 🙂

Carb frequency and timing:
Sofer 2012: 1 carb meal is better than 3.
Alves 2014: confirmed Sofer, and showed better results with carbs for lunch and protein for dinner than vice versa.

These aren’t isolated findings: Jakubowicz 2013 and Kahleova 2014 show it as well, but  similar to Jacobs and Hirsh, body composition wasn’t reported, and as such don’t influence the conversation on nutrient partitioning.  I’d also like to stress: 1) these studies are heavily nuanced; and 2) exercise may very well mediate many aspects of this pattern of nutrient timing, and it wasn’t included in these studies.  As mentioned in part 1 and the original text, exercise may be important to bolster PM insulin sensitivity selectively in skeletal muscle, to better manage a PM carb-load…  theoretically, PM exercise would provide greater benefits to a PM carb-load than to an AM carb-load (aka “damage control”),  which I believe may have considerably improved the outcomes in the groups assigned to big dinners or PM carbs.

Part III: Speculation on the mechanism

Sensitivity of adipose tissue to the anabolic effects of insulin increases as the day progresses.

in contrast to the above, these are acute feeding studies

Zimmet 1974 showed greater suppression of free fatty acids after carbs administered in the evening than in the morning.

Gibson 1975 showed greater suppression of free fatty acids after an insulin injection administered in the evening than in the morning.

Singer 1985 showed, in a 3 meal per day paradigm, that free fatty acids are suppressed more so after dinner than after breakfast or lunch.  Ruge 2009 confirmed this in a similar paradigm… although CBL et al. isn’t exactly a “3 meal per day paradigm,” which introduces variables that may or may not be at play otherwise… indeed, the regular bouts of intermittent fasting most likely contribute to the efficacy of CBL and similar protocols (as does heavy resistance exercise… context matters).

What does suppression of free fatty acids mean?  It reflects increased uptake and decreased release of fatty acids from adipose tissue.  This is a surrogate for fat accumulation and reduced fat oxidation.   The latter was demonstrated by Sacks 1999, who showed that after a morning meal, free fatty acids came back significantly higher than after an evening meal, and this correlated with a faster recovery of ketone bodies (a more specific marker of increased fat oxidation).  Get back into ‘fat-burning mode’ sooner, possibly because of increased sympathetic nervous system activation and energy expenditure while you’re awake during the day… this may not have been the case if an evening exercise session was performed (#context). 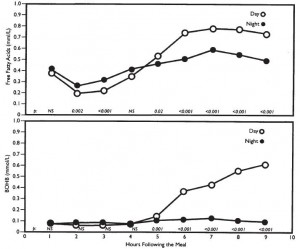 In agreement with previous studies, insulin secretion was higher after breakfast.  Despite this, fat oxidation increased sooner after the breakfast meal (as evidenced by increased ketones).

Note: the duration of “fasting” can be prolonged by skipping breakfast OR skipping dinner… circadian biology appears to favor the latter.  And the neuroendocrinological response to feeding is highly context-dependent ~ all bets are off if high-intensity resistance exercise is thrown into the mix (especially in the evening, when skeletal muscle insulin sensitivity is reduced).

I don’t think nutrient & exercise timing is going to have a quantitatively huge impact on body composition if diet and sleep quality are crap (unless you like big dinners, in which case PM exercise might be helpful).  Also, adherence is a strong factor… ymmv (context matters).

Check out my Patreon campaign! Five bucks a month for full access, up-to-date information, and much much more. It’s ad-free and you can cancel if it sucks 🙂