I got a laugh out of this one; not for the actual content, but because of how the authors worded their findings.  They sure love their fishies.

We have two very closely related fish, both Mexican tetra, Astyanax mexicanus, one with eyes who lives on the surface, and another who’s blind and lives in dark caves (“Pachon”).  It’s thought that they were the same species one day; divergent evolution.

The blind ones are circadian arrhythmic (Moran et al., 2014).  Surface-dwellers are more active during the day than night (blue line, left figure below), and their free-running circadian clock maintains this in the absence of photic input (blue line, right figure).  The blind ones, on the other hand, exhibit no circadian rhythm in the light or dark (orange lines):

Cave-dwellers are circadian arrhythmic.  This is both in their natural photoperiod (ie, darkness) and in light-dark conditions (which is technically an environmental mismatch, but since they’re eyeless, it doesn’t really matter).

Admittedly, I might be missing something big about these fish, but I had to chuckle when the authors kept referring to circadian arrhythmia like it was a good thing

Their circadian rhythm in metabolism was eliminated and they stopped evolving.

“Impressive?”  Hmmmmmm… I don’t really have any keen insight into these fish, but to be able to spin their findings so well, these authors must be poets. 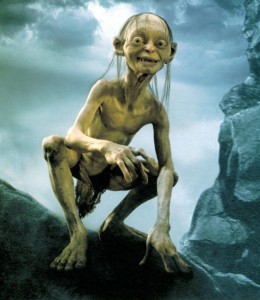 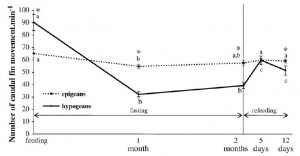 From the above experiment, we learned that cave-dwellers expend less energy than their circadian-normal counterparts.  That’s also confirmed here; but this study added that it’s not due to reduced physical activity…
circadian arrhythmia: exercise more, burn less.
Sound familiar? 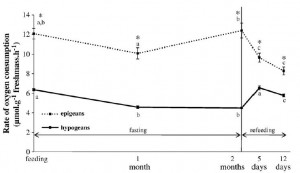 Anyway, during starvation, they seem to wail through fuel stores, spill ketones out the wazoo, and if it weren’t for severe hypometabolism, they’d probably die quite soon… despite this, they don’t lose any more weight than controls.  What they did lose, was muscle (or technically “total body protein,” because I’m pretty sure they didn’t use some elaborate technique to assess body composition: fishies probably just thrown in a blender and total protein content of the fish slushy measured).

Anyway, surface-dwellers maintained body protein during starvation, whereas cave-dwellers wasted away.  This is not due to a hypermetabolic state as they clearly efficiently suppressed their metabolism.

Researchers really love these fish!  They try to make everything about them sound like a good thing…

The circadian arrhythmic cave-dwellers lost more muscle than surface-dwellers.  This does not translate to an enhanced ability to “withstand long-term starvation.”