Melatonin is the chemical expression of darkness.

Melatonin is secreted from the pineal gland, the seat of the soul, the third eye.   Pinealectomy induces circadian arrhythmia and has interesting effects on adipose tissue biology.

Exhibit A.  In 2004, Alonso-Vale and colleagues showed that 6 weeks after pinealectomy, [melatonin-deficient] rats subjected to fasting exhibited an impaired energy conservation response.  That is, they lost more weight and significantly depleted their adipocytes: 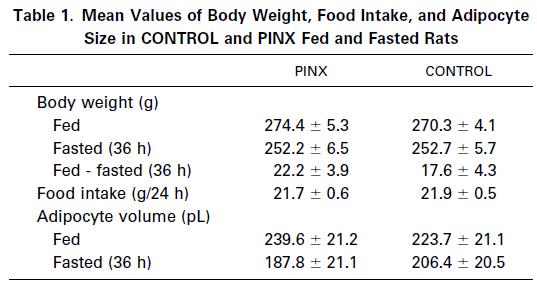 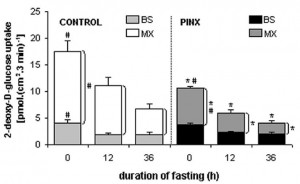 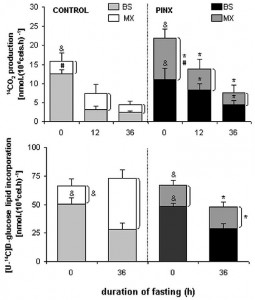 Collectively, these results suggest frank melatonin deficiency, while not advised, has long-lasting impacts on adipocyte biology which manifest as failure to conserve energy.  Interestingly, glucose and insulin levels in the fed and fasted states weren’t affected, but glucocorticoids were chronically elevated, and leptin plummeted to a significantly greater degree upon fasting in pinealectomized rats compared to controls: 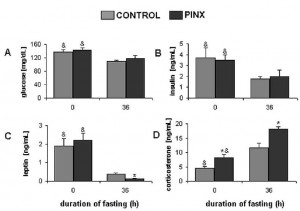 The leptin data are interesting because they would predict enhanced energy conservation, but this isn’t what happens.  Glucocorticoids usually rise at night, after melatonin peaks.  No melatonin, exacerbated increase in glucocorticoids – melatonin appears to negatively regulate this axis and boost the anabolic potential of adipocytes. 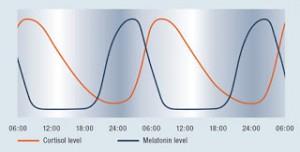 Exhibit B.  In 2006, Alonso-Vale followed-up these studies by exposing isolated adipocytes to melatonin in circadian fashion, and assessing how this affected the response to insulin and glucocorticoids (dexamethasone).

The left and right parts of the figure below show no melatonin and chronic melatonin, respectively.  Insulin alone has little direct effect on leptin secretion [in this model], and dexamethasone is stimulatory and enhanced by insulin: 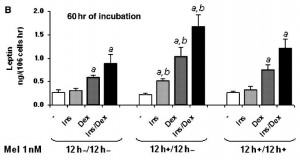 But when melatonin is exposed to the cells in circadian fashion (middle section), insulin induces leptin secretion, dexamethasone even more so, and the combination shows an even bigger effect. 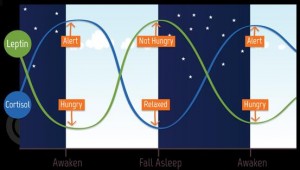 Leptin presumably rises during the day in response to the positive energy balance induced by eating.  It declines at night because you’re fasting.  Insulin potentiates this.  Melatonin alone has no effect, but when adipocytes are exposed to melatonin proper (circadian), the leptin response to insulin (and glucocorticoids) becomes apparent.

Exhibit C. Alonso-Vale did another study similar to the second (circadian melatonin), but did experiments similar to the first (adipocyte glucose metabolism) (2008).

First things first, insulin has the potential to bollix circadian gene expression.  In the figure below, Clock is elevated in the dark period regardless of insulin (left half of figure); but the decline in Clock expression during the light phase is blunted in the presence of insulin: 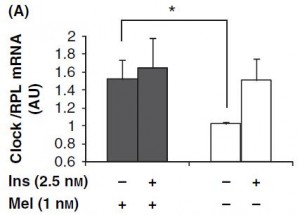 This wasn’t true for all of the circadian genes analyzed; some were affected by insulin equally in both phases whereas others weren’t affected at all.  I think the net effect is: no bueno.

And in agreement with the 2004 findings, melatonin enhances the incorporation of glucose into adipocyte lipids (and this is accentuated by insulin).  Interestingly, the effect of insulin was suppressed in the absence of melatonin: 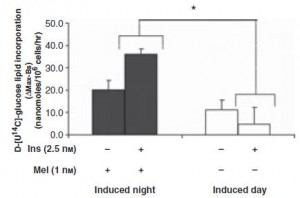 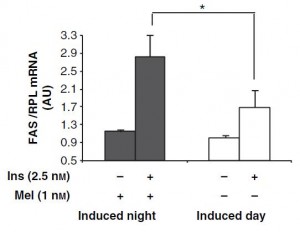 Melatonin also suppressed lipolysis, and this was [surprisingly] not enhanced by insulin: 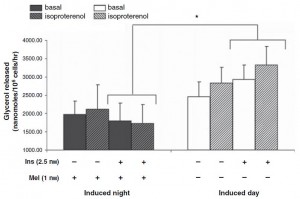 Lastly, insulin alone induced leptin secretion [in this model] and this was enhanced by melatonin: 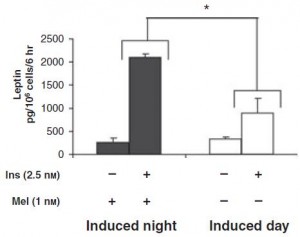 The way in which melatonin induces energy conservation thus seems to be at least partly independent from leptin and the nervous system; by increasing the anabolic potential of adipocytes.

The Israeli cop study showed that restricting carbs to dinner resulted in weight loss.  However, these studies imply that dinner might not be the best time? …melatonin + insulin = adipocyte growth.

If you’re interested in consultation sessions, email me: drlagakos@gmail.com.