BMAL1 and CLOCK, ‘positive’ regulators of circadian gene expression, activate transcription of the negative regulators Per, Cry, and Rev-erb.  PER and CRY inhibit BMAL1 and CLOCK, whereas Rev-erb inhibits Bmal1.  It is said that Rev-erb is “an important link between the positive and negative loops of the circadian clock.”  You don’t really need to know any of that to follow this blog post. 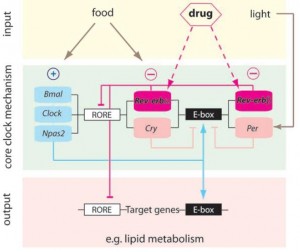 There are two Rev-erbs (alpha and beta) which have overlapping functions – deleting either one of them fails to affect Bmal1 rhythmicity (left), but deleting both does the trick (right): 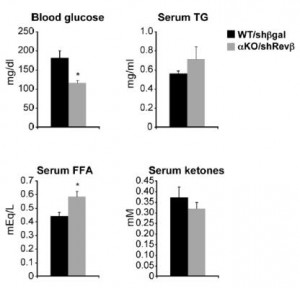 …now, on to more pressing matters.  The token indicator of circadian arrhythmia is disrupted activity patterns, which is apparent in the mice lacking Rev-erb globally (Cho et al., 2012):

When exposed to proper 12 hour light-dark cycles, the wild-type and single knockouts exhibit normal activity patterns (“LD;” yellow portion in the figures above indicates daytime, when they sleep).  And when in constant darkness, phase gradually shifts earlier and earlier but remains intact in the normal mice.  This is bollixed in Rev-erb knockout mice (iDKO), confirming circadian arrhythmia.  Also, in contrast to liver-specific knockouts, glucose levels are elevated in these mice.

So timing is off and a bit of metabolic disregulation, but no other gross abnormalities, which is why I found this study pleasantly surprising: 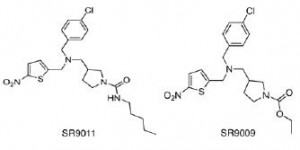 In brief, these compounds exhibited good selectivity and were able to repress Bmal1 in in vitro studies, suggesting Rev-erb agonism.  And when the drug was injected just once (see large arrow in figure below), rhythmicity in activity patterns is completely lost for about 24 hours (see the line just below the arrow), but is restored the following day, when the drug has presumably been cleared.

Both genetic ablation of Rev-erb and pharmacologically increased Rev-erb activity alters circadian rhythmicity.  Further, the agonist exhibits all of the predicted effects on gene expression: 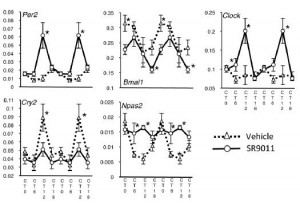 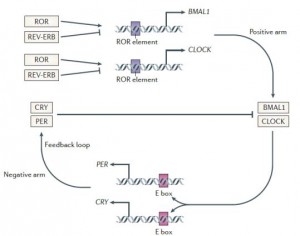 Treatment for 12 days caused weight loss despite no reduction in food intake.  Or, to be more accurate, the mice ate about 10% more when they were supposed to (at night) and slightly less when they weren’t (day); total food intake was actually elevated (albeit statistically non-significantly).  Pharmaceutical-grade circadian augmentation = unwittingly better-timed meals? Improved body composition? 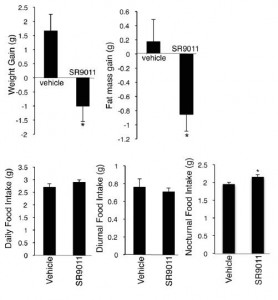 …they were eating more and moving less.

I think these findings are somewhat surprising because there weren’t many hints from the knockout studies, and we (I) would’ve expected any major tampering with circadian rhythms to wreak metabolic mayhem.

…one good thing about the drug is that there were no lasting effects; activity patterns returned to normal after the drug was withdrawn.  This is a somewhat mandatory “regulatory” feature for most drugs, even appetite suppressants: residual lack of appetite upon drug withdrawal suggests permanent, potentially neurological changes, which can be a nightmare for drug companies.  [insert conspiracy theory here].

Disclaimer: “new” drugs suck.  Just about all of them.  YEARS after their discovery and initial characterization, off-site targets are discovered (eg, resveratrol), weird side effects pop up (which may or may not be due to non-specificity), etc.  So for the time being, best stick with morning bright light exposure

(if necessary), and ‘normal’ meal timing.  And be sure to catch your Zzzzs.

, it reversed the changes in adipocyte Rev-erb expression in diet-induced obese mice (Miranda et al., 2013).  In this model, resveratrol is a bona fide miracle drug.  Is normalization of adipocyte Rev-erb why?  I don’t know, but I’d bet mice with adipocyte-specific Rev-erb deletion are in the works.

Food for thought: an endogenous ligand of Rev-erb is heme (the iron-binding element in red blood cells).  Heme is degraded into bilirubin.  Elevated levels of bilirubin cause jaundice.  A treatment of neonatal jaundice is exposure to blue light.  Blue light is a major regulator of circadian rhythms and Rev-erb is an executive-level player in this game.  The primary mechanisms of blue light appear unrelated in these two models (melanopsin activation vs. bilirubin photoisomerization), but seem intertwined, because heme activates Rev-erb.  Cool.