In brief, the one-size-fits-all diet theory is #fail.

On to the new study:

At baseline, patients were divided into insulin sensitive & resistant groups based on insulin levels (AUC) during an oral glucose tolerance test.  Then those groups were assigned to either a low fat or low carb diet.  There were four groups, three time points (baseline, 3 months, and 6 months).

To make a long story short, insulin sensitive patients randomized to the low fat diet lost about 20% more weight than those randomized to low carb.  Read that sentence again (just the part in bold). 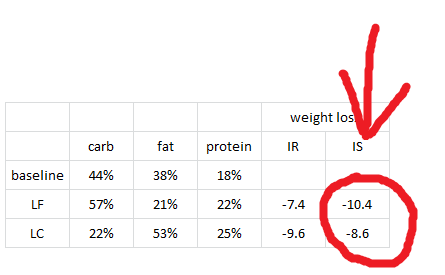 Don’t be a science denier! 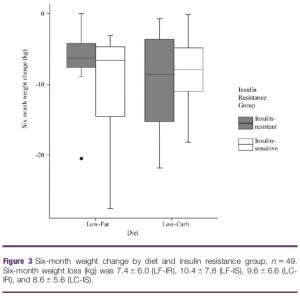 Was there a lot of overlap? yes (EVERYONE lost weight)

Was there statistical significance? no, except  metabolic parameters improved more so in people assigned to the insulin-appropriate diet (ie, LC for IR, LF for IS).

Are these data meaningful? YES

I say this because the differences are very close to the magnitude we’d expect in these populations.  Insulin sensitive dieters lost 20% more weight if they were assigned to a low fat diet, but they still lost weight on low carb…  we wouldn’t expect insulin sensitive dieters to gain weight on a low carb diet, just lose a little less because it’s not optimal in this #context. 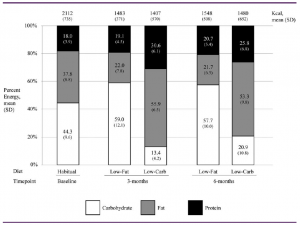 Are there a million other factors involved here?  YES.  Insulin sensitivity  is only one of ’em, but a pretty good starting point.

Theoretical scenario: a sedentary, obese insulin resistant patient starts off on LC and is initially successful.  They start exercising and focusing on sleep quality, insulin sensitivity improves (ie, new #context)... but weight loss stalls in many of these people.  Maybe at this point they would benefit more by switching the focus from strict LC to monitoring other things, like calorie or fat intake (ie, to match the new #context) –> progress resumes.
Maybe.

That’s all, for now.

If you like what I do and want to support it, head over to Patreon! Three bucks a month gets you full access, but sign up soon because there are only a few spaces left at the $3 level — then it jumps to $5 *gasp*