Correction: diets don’t fail, dieters do.  And don’t take that the wrong way; adhering to a restrictive diet is one of the most difficult tasks for ANYone; thus, the obesity epidemic.  Some recent insights into diet-induced weight loss success, or lack thereof, have shed a new light on why some dieters adhere and others don’t. 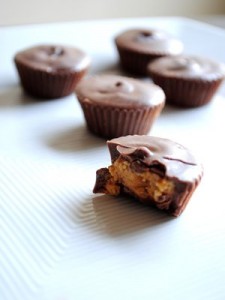 When it comes to devising a weight loss strategy, I’m willing to cut every corner and use every trick in the book to achieve success.  Data in this new analysis came from Chris Gardner’s notorious A to Z study, where patients were given diet books and told to have at it.  It was the weakest intervention in the history of diet studies, but it is exactly what everyone who wants to lose weight does.  And just like in Gardner’s study, most people fail. 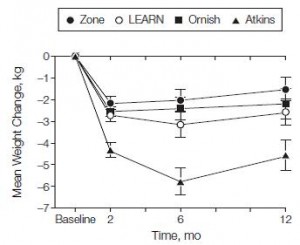 The most weight loss was found in people assigned to Atkins, but this amounted to a meager 10 pounds.  In ONE FULL YEAR of dieting. 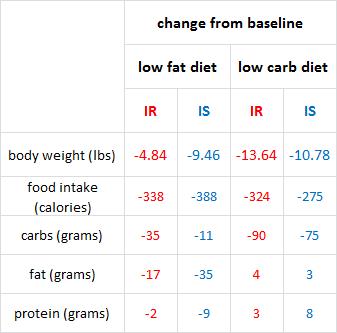 IR women assigned to the low fat diet lost the least amount of weight (2% or 4.8 pounds), while those assigned to low carb lost the most (7% or 13.6 pounds).  IS women assigned to the low fat diet lost twice the amount of weight (5% or 9.5 pounds) than IR women (2%).   Why, you ask?  IR women didn’t like their low fat diets.  They were able to adapt to their new diet so poorly that by the end of the study, they were back to eating their usual diet.  This was not the case with low carb, where everyone adhered and they lost a lot of weight for it.  All of the low carb dieters easily shaved off ~80 grams of carbs (from over 200 grams per day to less than 150), whereas the IR low fat dieters could barely eat the equivalent of one less tablespoon of peanut butter per day.

To summarize the graph below, everyone on low carb did what they were supposed to, but only insulin sensitive women on low fat did. 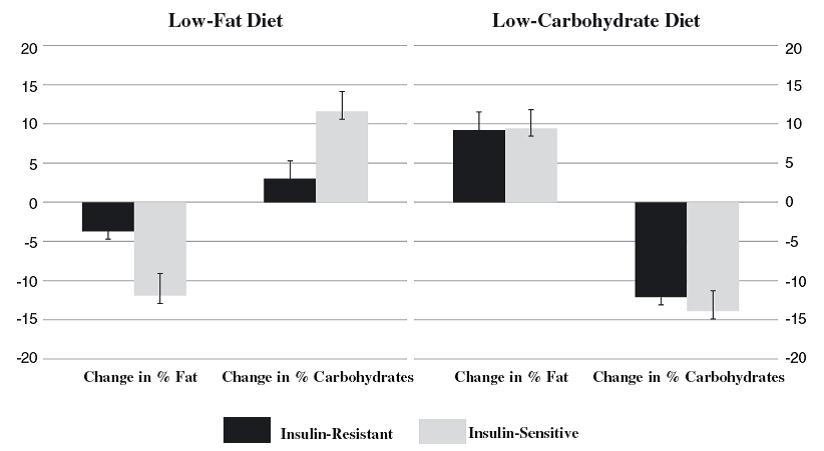 Furthermore, the low carb dieters didn’t even reduce their calories as much as low fat dieters yet they lost more weight… low fat dieting causes a greater decline in metabolic rate than does low carb dieting (I predict the appreciation of this will increase greatly in the weight loss community in the future).  To be clear, if the low fat dieters adhered more strictly, it’s possible that they could have lost as much weight as their more laid-back low carbing counterparts, but this isn’t news.  you’re better off half-assing a low carb than strictly adhering to low fat.

Adherence to ANY diet is critical for success, but this is the least important on low carb.  From Shai (2008):

Some speculation on why this works:  fat is satiating, regardless of whether it comes from butter or your rump.  Carbs trigger ultra-high insulin levels in insulin resistant people, which causes fat storage (stored fat is not available to satiate your appetite).  Then you’re hungry again; and metabolic rate declines making any caloric reduction you managed to achieve significantly less effective.  This doesn’t happen so much on low carb (e.g., Ebbeling).  Is it really that simple?  Perhaps.  Maybe Atkins (low carb high fat), Dukan (low carb high protein), and low glycemic index (a little bit of both) got it right.  Low fat diets work when dietary fat & calories are restricted to such an extreme degree that insulin levels decline, and energy intake goes down further than metabolic rate.  It’s an uphill battle against will power and insatiable cravings, or a fire-breathing dragon if current diet failure rates are taken into consideration.  But when it comes down to tips and tricks, this is the best I got.