What happens if you give skinny kids a can of fully sugared regular soda to drink every day for a year?

What happens if you take the soda away from overweight kids for a year?

The answer to these two questions should be a definitive user’s guide to the question: how bad is soda for my children?   And we got those answers this week. 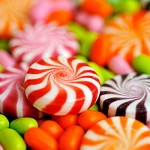 A set of powerful studies were recently published, the likes of which I thought we’d never see.  It’s unethical to assign anyone to start smoking so we can properly study the effects of cigarettes; and before today, I would’ve thought it unethical to assign young children to start drinking fully sugared regular soda.  And not just one or two cans…  over 350.  For the 4 year olds the first study, by the end of the trial they had been on soda for almost a third of their life… during a critical period of development.  Ethics schmethics.  Hopefully this study will never be repeated.

Exhibit A.  A trial of sugar-free or sugar-sweetened beverages and body weight in children (Ruyter et al., 2012)

Speaking of ethics, I have a disclosure to disclose: this study was a bad idea.  The researchers and parents who volunteered their children are either non-readers, or non-believers of The poor, misunderstood calorie.  And this is probably the only time I’ll ever say it was better that this study wasn’t a crossover; that way, at least half of the kids weren’t chronically exposed to soda .

Amsterdam, the Netherlands.  18-months; 477 healthy children aged 4 – 10 years old.  Regular vs. diet soda;  26 grams of sucrose vs. 34 mg sucralose & 12 mg of acesulfame K.  They had to have a custom soda made because Coca-Cola and/or Pepsi would’ve squashed Ruyter like a fly if her results showed any negative effects.  With no further ado: 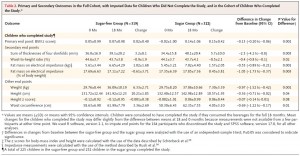 In contrast to what we usually discuss (i.e., weight loss), this is a study of growing children.  Accordingly, they all gained weight.  Those on regular soda got 25% heavier while those on diet soda by 21%.  But [as predicted], there’s a dark side to this story. 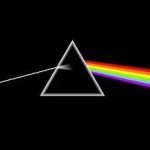 No, not that Dark Side, 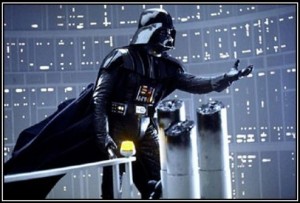 Regular soda drinkers gained 55% more fat than diet soda drinkers.  Being accustomed to seeing much smaller differences between groups, I usually quip something like: “obesity doesn’t happen overnight.”  But not in this case.  That is a drastic difference.  Childhood obesity epidemic, anyone? 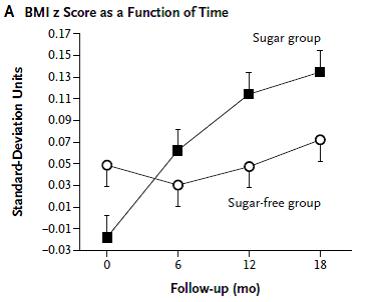 Some people argue that when someone switches from regular to diet soda, they just make up the calories elsewhere.  IT DOESN’T MATTER; any other calories are less fattening than soda.  All calories are not created equal.  N.B. This study did not suffer from the usual flaws like small sample size or short study duration.

Those in the control group gained 9 pounds, or ~5% of their starting body weight, while those who reduced soda intake only gained 4 pounds (less than half).  Both groups reduced sugar intake, by 36 grams and 76 grams in the control and experimental groups, respectively, but soda drinkers gained over two times more fat.  TWO TIMES =  DOUBLE.

During the year following the study’s conclusion, the experimental group started drinking more sugar and the difference in body weight between the groups got smaller, confirming the specificity of the intervention.

These studies are randomized intervention trials, not simply observational, cross-sectional, or otherwise epidemiological studies.  They are designed to demonstrate cause and effect, not just correlations or random associations.

these findings shouldn’t be surprising (to regular readers of TPMC)…

Conclusion:  Drinking regular soda may not be as dangerous as playing in traffic, but it can make you fatter.