Why it is important and what you can do about it, Op. 105 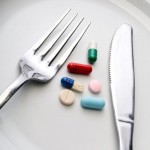 This post was largely inspired by a recent manuscript by Chris Gardner.  He’s an outside-the-box thinker and if you haven’t heard of him, check out this YouTube video: The Battle of the Diets: Is Anyone Winning (At Losing?)

Type II diabetes is the clinical manifestation of insulin resistance.  It is preceded by obesity (except in the cases of MONW & NOD), and caused by poor nutrition.  Markers of insulin resistance are: 1) impaired fasting glucose; 2) impaired glucose tolerance; and 3) elevated HbA1c.  THIS is why it is important: in 2009, Barr and colleagues showed a linear relationship between all three of these risk factors and all-cause mortality in the AusDiab study.  All.  Cause.  Mortality. 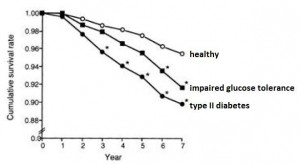 From a multi-country study by Doehner and colleagues (2005): 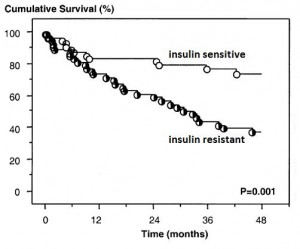 Convinced yet?  Insulin resistance, regardless of how it is measured or expressed, bodes poorly for survival.

What can you do about it?  Insulin resistance is universally attenuated by weight loss.  And while some people can lose weight by simply reducing calorie intake, insulin resistant people in particular are most benefitted by carbohydrate restriction…  (unfortunately most overweight/obese people are insulin resistant.)

Pittas took 32 overweight people and divided them up by insulin values 30 minutes after consuming a sugar-sweetened beverage.  In other words, insulin sensitive (“Low INS-30”) or insulin resistant (High INS-30).  Then he randomly put half of the people in each group on either a high glycemic load (“high GL” = high carb) or low glycemic load (“low GL” = low carb), moderately calorie restricted diet (~ 2,000 kcal/d) for 6 months. 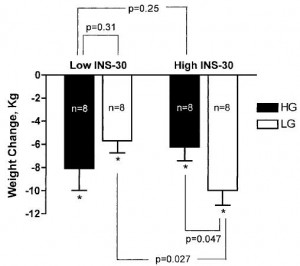 Insulin resistance is carbohydrate intolerance.  It means that more insulin is needed to metabolize carbs.  A side effect of more insulin is increased fat storage.  Lowering insulin by reducing carb intake leads to fat loss.  Food intake was controlled in these studies.

how do you treat lactose intolerance?

Cornier took 21 ovese women and divided them up by fasting insulin values.  Then he randomly put half of the people in each group on either a high carb or low carb, moderately calorie restricted diet (-400 kcal/d) for 4 months. 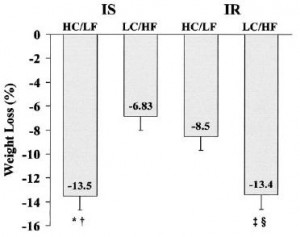 Insulin sensitive obese women lost more weight on low fat while insulin resistant lost more on low carb.  All food was provided by the researchers; the insulin sensitive people on low carb and the insulin resistant people on high carb lost the expected amount of weight.  But the people with diets specifically tailored to their respective sensitivity to insulin lost significantly more weight.  It’s not about calories (food intake was controlled!), it’s about how your body responds to the nutrients that make up the calories.  Carbohydrate intolerance is more effectively treated by reducing carbohydrate intake than by simply reducing calories.  Calories in don’t equal calories out.  Nutrition matters.

Ebbeling took 73 obese adults and divided them up by insulin values 30 minutes after consuming a sugar-sweetened beverage, similar to Pittas.  Then she randomly put half on a low glycemic-load (low carb) or low-fat (high glycemic-load) non-calorie restricted diet for 18 months.

I stress “non-calorie restricted” because it’s important; people naturally eat less when they’re being monitored, so we expect weight loss despite this.  The effect of the observer on the observed (Margaret Mead): 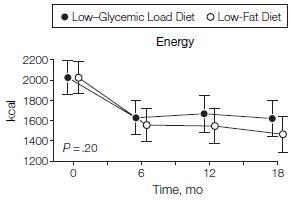 N.B.  This is a long study with a lot patients.

In contrast to the earlier studies, weight loss was similar in insulin sensitive people on either diet; in other words, the rare, yet seemingly lucky, insulin sensitive obese person can lose weight by cutting calories alone.  But insulin sensitivity is rare in obesity.  Insulin resistant people, on the other hand, lost significantly more weight on the low carb diet… and they kept it off for 18 long months!  The people assigned to low fat were eating slightly fewer calories than those on low carb, but the low carb dieters (at least the insulin resistant ones) lost significantly more weight.

Actually, by the end of the study, the insulin resistant people on a low carb diet lost over twice as much body fat than any other group.  It didn’t matter what diet the insulin sensitive people ate; they are tolerant to a wide range of carbohydrate intakes and thus only require a simple calorie deficit.

So WHAT DOES THIS ALL MEAN?!!!

In general, and most unfortunately, overweight/obese people are insulin resistant with few exceptions (those who engage in regular high intensity exercise, for example)

I humbly submit Exhibit D.  The point of this is simple: overweight/obese people are insulin resistant and respond better to carbohydrate restriction.  Enter montage music or soundtrack of your choice.  With no further ado, 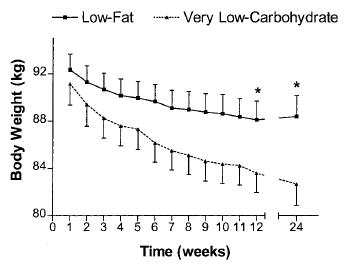 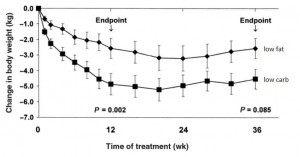 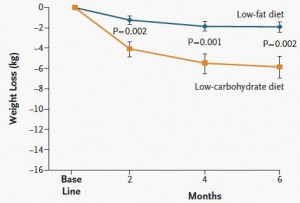 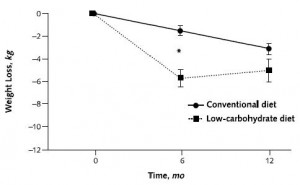 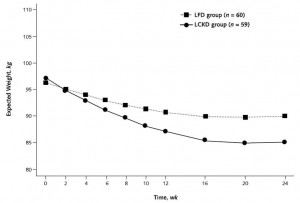 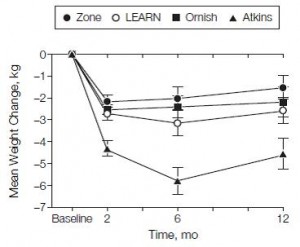 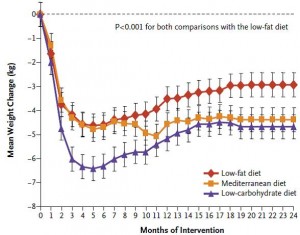 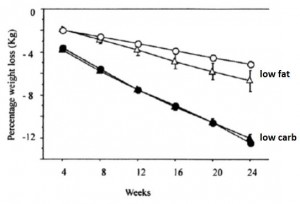