I thought long about where to set the goal post for this article (and will try not to shift it haha).  Paleo-bro’s lash out hard against veganism, claiming it will literally kill you.

Dr. Garth Davis, author of Proteinaholic, is a vegan physician who has successfully treated many patients with a plant-based diet (not vegan to my understanding, but low animal intake).  Imo, Dr. Davis is one of the rare third breed of vegan: health-based, ethical, but NOT a zealous fanatic.  I requested some of his favorite intervention studies and he kindly obliged.

Here is a brief overview of the studies he provided in chronological order, and my comments.

Despite modest weight gain, it worked.  My only critique is lacto-ovo-vegetarian =/= vegan; eggs and dairy are animal super foods, very nutrient-dense.  Not much information about the baseline diets is reported, so it may have simply been a healthier diet overall.  But avoiding red meat for 6 weeks didn’t literally kill them.  And reduced blood pressure despite modest weight gain is rare and bodes well.

“Experimental group patients were prescribed an intensive lifestyle program that included a vegan diet supplemented with soy (1 daily serving of tofu plus 58 gm of a fortified soy protein powdered beverage), fish oil (3 gm daily), vitamin E (400 IU daily), selenium (200 mcg daily) and vitamin C (2 gm daily), moderate aerobic exercise (walking 30 minutes 6 days weekly), stress management techniques (gentle yoga based stretching, breathing, meditation, imagery and progressive relaxation for a total of 60 minutes daily) and participation in a 1-hour support group once weekly to enhance adherence to the intervention. The diet was predominantly fruits, vegetables, whole grains, legumes and soy products, low in simple carbohydrates and with approximately 10% of calories from fat. The diet is intensive but palatable and practical. In earlier studies most patients were able to adhere to this diet for at least 5 years.”

My only critique is that a comprehensive lifestyle intervention is so much more than simply vegan.  In any case, it worked.  And prostate cancer is very serious.  And a WHOLE YEAR of zero red meat didn’t literally kill them.

“The low-fat vegan diet consisted of fruits, vegetables, legumes, and grains. Animal products were proscribed, and the use of unrefined foods was encouraged. Participants were asked to limit high-fat plant foods, such as avocados, nuts, and seeds. The NCEP diet followed the former NCEP Step II guidelines, which are similar to the current NCEP Therapeutic Lifestyle Changes diet. There was no restriction on energy intake for either diet group, and participants were encouraged to eat to satiety.”

And no fatalities, literally, with 74 weeks of no red meat.

Comments: potentially meaningful changes in blood pressure (similar to Exhibit A), if it works in hypertensive patients.  Reduced inflammation.  And the spontaneous reduction in ad lib food intake is great… had the study lasted longer than 3 weeks, this may have resulted in weight loss.

Context: omnivore vs. pescoovovegetarian vs. lactovegetarian for two weeks for 2 weeks.

Comments: No #vegan interventions.  Interestingly, mood improved only in the lactovegetarians (not pescoovovegetarians), but it was modest and only significant in 2 out of 11 assessments of mood.  So, dairy is cool, and literally no fatalities in either of the no red meat groups.

Comment: vegans lost the most weight, but lacto-ovo-vegetarians were a close second (see comments from Exhibit A). 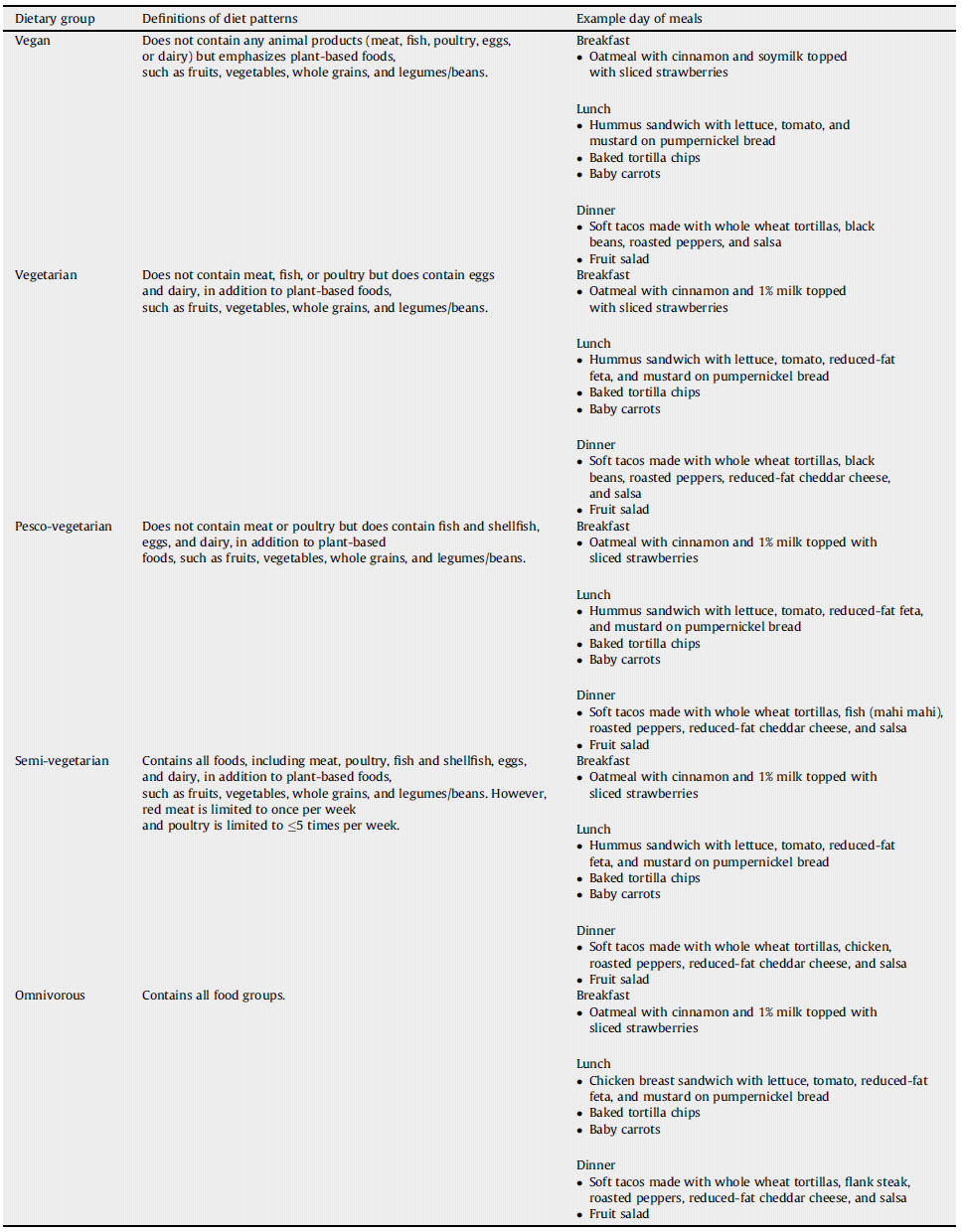 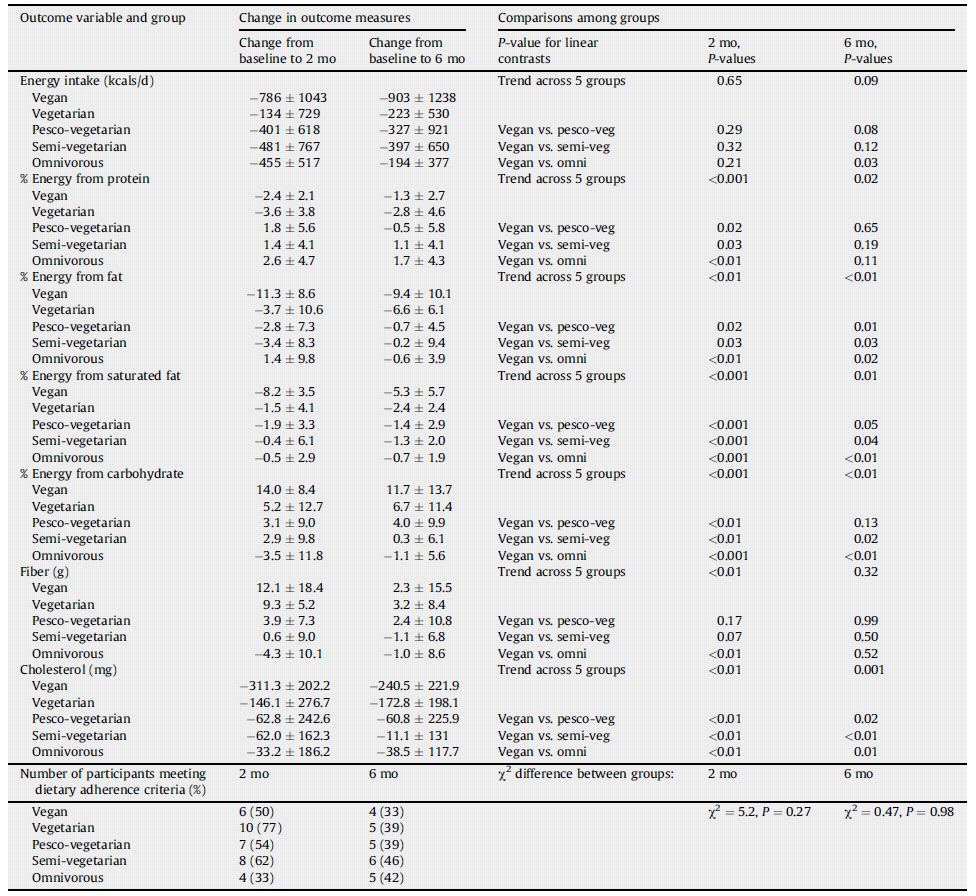 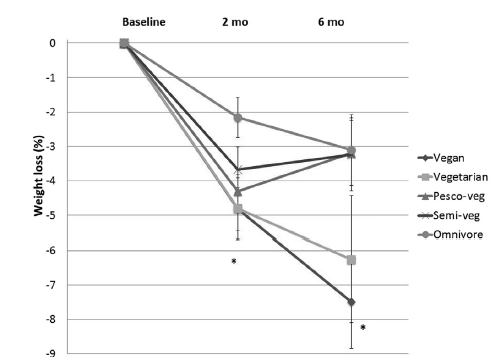 This isn’t one of the studies Dr. Garth sent me, but demonstrated an important point imo.

Animal protein is bad, but “these associations were confined to participants with at least 1 unhealthy lifestyle factor based on smoking, heavy alcohol intake, overweight or obesity, and physical inactivity, but not evident among those without any of these risk factors.”

***this is the straw that usually breaks the back of many studies.  It’s very difficult to control for all the bad things unhealthy people do (partly bc we don’t know all of the relevant ones), but when we do, spurious correlations evaporate.