Extra, extra, read all about it

But is this really the best message?  I mean, they didn’t have to do any research or studies or anything, because, well, it’s obvious.

This paper is a nice example of how it might not be so obvious.

These researchers took two groups of mice, fed one group “ad libitum” (AL), meaning, the mice ate as much as they wanted, and fed the other group 5% less (calorie-restricted, CR).  For the record, 5% is not very much; it’s about 100 fewer calories for you or me.  And apparently, it’s not enough to cause weight loss: 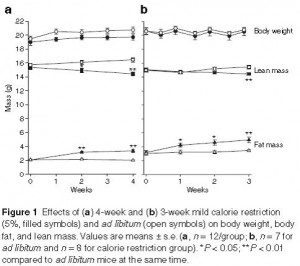 the experiment was performed twice, and the results are in panels a & b above.  The top lines represent body weight and you can see that there is virtually no difference between the groups.  Look a little further down, however, and you will see that the calorie-restricted group actually lost lean mass (skeletal muscle).  Aargh.  If that isn’t bad enough, mathematically it doesn’t exactly work out unless the mass of something else increased to balance it.  Look further down on the figure, their fat mass actually increased.  Sounds like the worst diet ever.  They didn’t get fatter, they got fattier.

1. Why did they lose muscle?

2. How did they gain fat while being underfed?

What is going here ?

To a large degree, muscle mass determines energy expenditure, which in turn is roughly equivalent to your food intake.  So there is a good relationship between the amount of muscle you have and the amount of food you eat.  As seen above, the opposite appears true also.  By reducing food intake, muscle mass declined, apparently to match the new (lower) food intake level.   So, for now, we can blame the muscle loss on the calorie deficit.

What about the fat gain?  Fat gain is very unlikely if you are in a hypocaloric state… so maybe the mice weren’t technically hypocaloric.  They researchers measured resting energy expenditure (REE) and found that their metabolism was significantly lower. 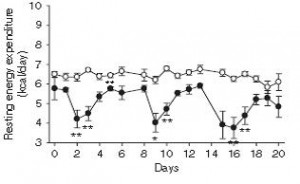 In other words, the 5% calorie restriction would have been hypocaloric for “ad libitum” fed mice, but once on the diet, their metabolic rate slowed down so much that 5% fewer calories was no longer hypocaloric.  What caused this reduction in metabolic rate?  The researchers then measured physical activity and found the mice certainly weren’t less active, and were actually more active at some time points. 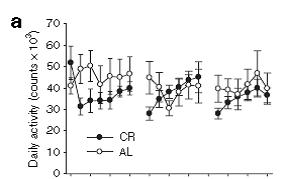 Since they weren’t less active, the reduced energy expenditure must have been in the form of a lower metabolic rate.  In other words, they didn’t get tired or lazy, their body’s intrinsic metabolic rate simply declined.  This was likely related to the loss of muscle mass, but admittedly, these data are a bit cryptic.

To summarize: 5% calorie restriction -> muscle loss -> lower energy expenditure -> reduced metabolic rate -> increased fat mass ?     Well yes, all of those things occurred, but whether or not they necessarily occurred in that sequence is less clear.

Eating less and moving more is not the answer.