the great difficulties of weight loss

As usual, the media buzz and author’s own interpretations are inaccurate, exaggerated, or downright bizarre, but the study was fairly well-executed so it isn’t without a few novel insights.  Actually, some of their findings are quite interesting.

50 obese patients underwent an intensive ultra-low calorie diet to lose ~15% of their body weight in 10 weeks, and returned one year later for a battery of testing.  Two common problems with this type of dietary interventions studies are 1) failure to achieve significant weight loss, and 2) weight re-gain.

, Nestle; nutrition information).  By nutritionally adequate, I am specifically referring to vitamins and minerals…  the calories in Optifast VLCD (150 kcal tid) are comprised of 46% protein, 14% fat, 39% carbs… 24% of the total calories come from sugar.  This plus 2 cups of “low-starch vegetables” is all the subjects consumed during the weight loss period.  The macronutrient ratios extreme hypocaloric level is incompatible with anything normal (e.g., the Minnesota Starvation Studies).  So while this is not a recommended weight loss strategy (not viable for the long-term, horrible side effects due to fatty acid deficiency, etc.), it is certainly effective.

The second problem was solved by [brilliantly] excluding data from participants who dropped out or who failed to maintain the weight loss.  Also known as a “completer’s analysis,” this is the bane of dietitians, many of whom prefer the “intention to treat” (ITT) analysis.  ITT includes data from every subject who began the intervention and is justified because it is said to reflect what would actually happen to a group of real-life patients.  I usually dislike ITT because it considerably dilutes the actual effects of the intervention with data from subjects who didn’t complete the intervention.  In this study, ITT is particularly inappropriate because the authors wanted to see the effects of long-term adaptations to weight loss; if the patients dropped out because of inadequate weight loss, then their biochemical variables do not reflect long-term adaptations to weight loss, which was the whole point of the study.  In more complicated cases, dropouts aren’t random, so the results may be restricted to a very specific mystery group of people (i.e., NOT the people you to which you think they apply).  Thus, the second problem was solved by the author’s choice of statistical analysis. 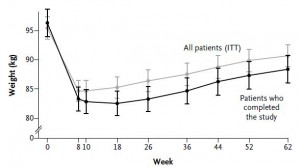 They started out at 96.3 kg (~212 lbs) with 51.6% body fat (FTR, that is a LOT of excess fat mass) and lost 13.5% of their initial body weight during the 10-week weight intervention (pretty good for diet alone), and gained half back by the end of 1 year (disappointing but common).

#1. The authors stressed throughout the entire manuscript that the subjects were weight-stable at a reduced body weight for the subsequent year; it was built-in to the intervention (as described in the Methods section), and it was consistently referenced in the discussion.  However, according to Figure 1, this is horribly incorrect.  In fact, I would say the subjects were in a positive energy balance for the entire year.  This doesn’t mean the study is worthless; it just means that we aren’t talking about people who lost 30 pounds and kept it off.

#2a.  These subjects were 56 ± 10 years old and probably spent a few decades with their excess adiposity.  Forgetting about point 1 (above) for the moment, 1 year in a weight-reduced state is far from “long-term,” relative to the amount of time they were heavier.  If someone has 50 excess pounds of fat mass for 25 years, do you expect everything to go back to normal after a year at a slightly lower body weight?  No.  It is interesting to see what is happening at that time point, but is not what I would consider long-term.  I’d say most of their biochemical indices reflect the preceding 25 years, not the past year.  Are there permanent metabolic derangements in weight-reduced people?  Perhaps, but I don’t think we are seeing what the authors claim to be showing us.

Not many data were presented.

These data confirm my critique in point #2 (above), i.e., the subjects were not weight stable.  Their pre-diabetic state (glucose ~5.9) was fully recovered, albeit at a lower body weight (88.3 vs. 96.3 kg).  This is not a good thing.  If the subjects were stable at a reduced body weight, then their fasting glucose would have remained low.  Actually, I think these data support the yo-yo dieting theory; these subjects will be more insulin resistant when they returned to their normal body weight than they were at the beginning of the study… Indeed, I predict their fasting insulin will exceed 17.7 mU and glucose 5.9 mM when their body weight [inevitably] fully recovers, unfortunately.

Interesting finding #2, it doesn’t look like adipose insulin sensitivity was really affected by the intervention:

Non-esterified fatty acids (plasma free fatty acid levels, “NEFA”) moved inversely with insulin, to a tee.  This probably supports the notion that adipose insulin sensitivity is normal in obese subjects prior to diabetes.  And these were obese but otherwise relatively healthy subjects, probably nowhere near frank diabetes.

Here is where the author’s data interpretation starts to go off-the-wall.

Leptin is secreted from fat cells to signal the brain that energy stores are full.  The authors claim leptin, an appetite-suppressing hormone, is still excessively reduced in the weight-reduced 1 full year after weight loss.  This is would be predicted to elevate hunger levels and drive weight regain.  The media buzz jumped all over this, in agreement with the author’s own interpretation, and said this is one of the reasons why so many dieters fail.  However, I would argue that 1) leptin was highest at baseline (when fat mass was the highest), 2) leptin was lowest at week 10 (when fat mass was lowest), and 3) leptin was intermediate at week 62 (when fat mass was intermediate).  Thus, leptin was properly regulated.  Furthermore, as leptin is correlated with fat mass, leptin shouldn’t return to baseline levels until fat mass returns to baseline levels.  Leptin 101.  They should be experiencing an intermediate level of hunger at week 62.

But alas, this is not happening.  The authors performed a battery of psychological tests to assess post-weight loss appetite.  Although psychology is not my forte, these data seem straight forward and extremely important: 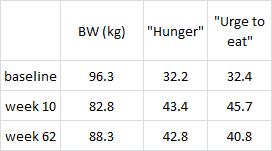 “Hunger” is increased by week 10, exactly as expected for subjects that just lost 14% of their body weight in 10 weeks on a semi-starvation diet.  But even after they’ve regained half of the lost weight, they’re still just as hungry.  And the “urge to eat” is even starting to decline.  So it appears that they are adapting quite well.  Extremely well, in fact.  They spent 20 years overeating to maintain a huge amount of excess fat mass and in 1 short year their appetite is already starting to adjust to match their lower body weight.

The lower leptin levels immediately after weight loss, at week 10, reflect the starvation response and most likely had something to do with their increased hunger levels.  But the authors noted there was no correlation between hunger and the degree to which leptin declined.  In other words, if two people both lost exactly 14% of their body weight, and one person’s leptin dropped half more than the other, they weren’t half hungrier, meaning leptin isn’t exactly related to appetite.  Furthermore, and of utter importance, leptin levels didn’t correlate with weight regain; people who were hungrier were no more likely than anyone else to regain weight.  Everybody gets hungry after they lose weight; they are not more or less disadvantaged than others because of dysregulated hormones- the hormones and hunger responses were intact.  They may have even been adjusting to facilitate maintenance of a lower body weight, but this is not a “cool” conclusion, so it wasn’t entertained by the authors and certainly not by the media.

A speculative pearl: perhaps the markedly less hunger than expected based on the lower leptin levels is due, in part, to the lower insulin and free fatty acids.  These subjects were tapping into their stored fat, which may have compensated for the reduced energy intake.

I’m not saying that a 210 pound person can eat just as much as a 180 pound person if they too want to weigh 180 pounds.  No, depending on how fast they want to lose weight, they might need to eat less or markedly differently from their current diet.  But to consider that a disadvantage is backwards.  For a person to go from 180 to 210 pounds they ate more than a 210 pound person (it takes a lot of additional energy to lay down all that excess fat mass! … a lot of it just burns off).  Is that an advantage?  It is as much of an advantage as the disadvantage of a lower metabolic rate in weight-reduced people.  The data simply don’t tell a sad story about how hard it is to lose weight, they tell a clear story about energy balance.  The efficiency of investing excess energy from overeating in fat mass is matched during weight loss. It might not be “easy,” but the deck isn’t unfairly stacked.  They regained weight not because they were hormonally hungrier, they most likely regained it for the same reason they had it in the first place.

One response to “the great difficulties of weight loss”