On calorie information posted in restaurants

“This is biology, not mathematics.”

It’s law in some places.  It’s a burden on restaurants.  And it will do nothing for the cause – like trying to put out a candle by pressing the off button on your remote control.  In other words, a waste.

Here’s some of the “science” behind it.

1 in 3 customers ate over 1000 Calories for lunch.  OK, perhaps this is a little high if it occurred after a ‘well-balanced’ breakfast (cereal, juice, toast with jam,  or pancakes & syrup, etc.), and before to a big dinner after a long day sitting at a desk.

The researchers thought that if calorie information was posted, and people actually saw it and changed their fast-food eating habits, then something good would happen. 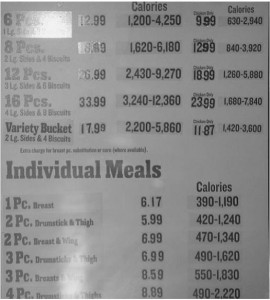 Exhibit B1.
Finkelstein studied this at Mexican restaurants in Kings County, Washington and showed that, despite average calories per transaction well in excess of a whopping 1000 Calories, calorie information had absolutely no effect on food purchases.

Exhibit B2.
A bigger study was conducted in Kings County that included more restaurants and a longer follow-up period (18 vs. 6 months after the law went into effect).  They found…wait for it… Calories declined by 41 per transaction! And saturated fat by 0.7 grams, FTW!

For what it’s worth, Calories per transaction were ~800 & saturated fat <10 grams.  P.S. the “worth” in this case is very little, imho.  For example, 41 Calories is about 5% of 800.  That is WELL within the estimated error for Calorie counts.

Nothing good other than “statistical significance” can come from relying on unreliable data.  This is FUBAR, and it’s becoming the law of the land.

And on a more humorous note, those changes weren’t entirely due to people seeing calorie information and using it to make more informed decisions.  Over the 18 months of the study, a lot of restaurants changed the recipes (formulas) to have fewer calories and saturated fat in their foods.  So the mere act of calorie posting didn’t work, even though it couldn’t have even “worked” in the first place.

Exhibit C.
And lastly, a study by Cohn concluded: “although most postings were legally compliant, they did not demonstrate utility.” Good… but: “Menu postings for individual servings are easily understood, but complex math skills are needed to interpret meals designed to serve more than one person.” Doh!  #FACEPALM   Blaming poor utility on a lack of complex math skills!? 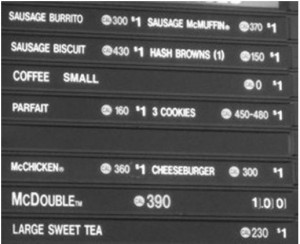 This is biology, not mathematics.

19 responses to “On calorie information posted in restaurants”