The day you’ve all been waiting for has finally arrived.  Results from the Look AHEAD study have been published.  When I first wrote about this study (HERE), it had been prematurely halted because the intervention was providing no benefits.  Everybody was in a state of shock and awe because Low Fat didn’t save lives.  But that was before we even had the data.

Reminder: the “intensive lifestyle intervention” consisted of a Low Fat Diet & exercise.  The results?  Yes, they lost more weight than control, but they also took more Orlistat (of which I’m not a fan, see HERE for why): 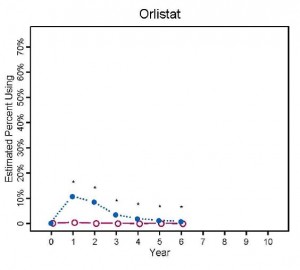 Their normal diets were not healthy, but neither was low fat –> 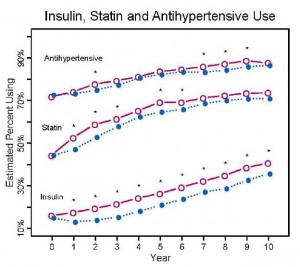 Medication use increased drastically in both groups.  The pundits have gone wild because medication use was lower in the intensive Low Fat group at the end of the study, but this is Nutrition Disinformation 2.0.  Eerily reminiscent of the recent Mediterranean Diet study, the conclusions are the same: keep eating poorly and the need for medications will increase.  You can call it a lot of things, but not “healthy.”  The alternative –>  How to define a “healthy” diet.  Period. 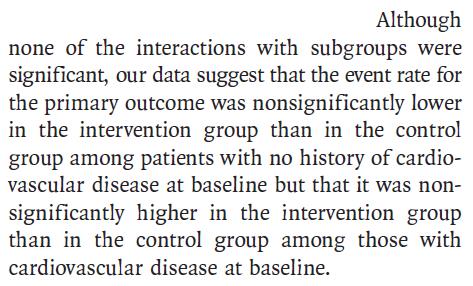 Translation: if you were healthy at baseline, then you could tolerate a low fat diet.  Otherwise, not so much.  This is exactly what happened in the Women’s Health Initiative.

needless to say, none of the “possible explanations” they considered were Low fat diet Fail.

One response to “Look AHEAD – Nutrition Disinformation 2.0”