the correlation between time spent watching TV and body weight may have nothing to do with the common thought that if kids aren’t watching TV, they’re out playing.  No, it turns out that kids who watch less TV eat healthier.  They sit around just as much … just not watching TV.  Is there something about mindless sitcoms and cartoons that make us want to eat junk food … or snack … wait a minute … subliminal commercial advertising?

Is any of this true?  probably not.  But if I were to test it, I’d like an intervention study with a couple randomized groups including: one whose TV commercials were strategically replaced with equally fun commercials that don’t promote snack foods; a group of kids who don’t watch TV; and maybe a group who doesn’t watch TV but is exposed to subliminal snack-promoting advertisements…   food for thought.

Changes in diet and lifestyle and long-term weight gain in women and men (Mozaffarian, Hao, Rimm, Willett, and Hu, 2011 NEJM)

This is one of the biggest and longest running prospective studies on diet and lifestyle behaviors.  That’s not to say it’s the best study; epidemiological, observational, and prospective studies are subject to a variety of crippling limitations; but this one is big.

It is a compilation of three big studies that I’ve blogged about in the past:

First, to set the mood: people don’t gain weight magically.  This study was unique in that there were multiple dietary assessments, performed over a very long period of time, in the same group of people.  And one way people gain weight is by eating more.  So these authors were able to see which foods, when increased in the diet, correlated with weight gain.

And the winner was, somewhat surprisingly, potatoes!  Actually number 1 was potato chips, and number 2 was potatoes and French fries or crisps.  The surprise, IMHO, was that soda and junk food was much further down the list.  Furthermore, I might have thought potato chips could be number 1 because of their high trans-fat content, but the presence of potatoes (which lack trans-fats) at number 2 means that trans-fats are not the obesogenic component of potato chips.

The figure (kudos for data presentation): 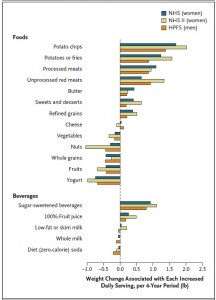 Exercise was also included in their analysis.  Another good-looking figure, albeit a little more complicated: 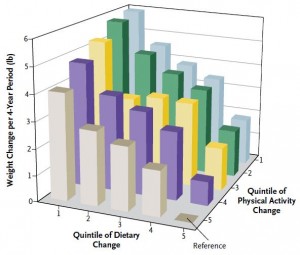