In general, type II diabetes is preceded and possibly even caused by obesity.  However, there is a marked variation in the amount of excess fat mass that individuals accumulate prior to developing frank diabetes.  IOW, some people are morbidly obese for over 10 years before succumbing to diabetes while others become diabetic much sooner.  In fact, some people, known as “metabolically obese normal weight” (MONW), are technically lean (BMI < 25) when they develop the metabolic syndrome.

While genetics and environmental exposures play a role in determining the amount of fat mass an individual can ‘safely’ accumulate, nutrition is probably the most important factor.

The BMI scale was developed, in part, to specify these ‘safe,’ or more appropriately ‘healthy’ ranges of adiposity.  That is why there are sex and even international variations.  For example, a healthy BMI for people in East Asia is lower than that of Americans.  This is not because of the difference in average body weight between the two populations, but rather due to the observation than people in East Asia develop obesity-related health problems at lower levels of adiposity than Americans.

This is, in part, mediated by diet.

This is essentially the Korean equivalent to the United States’ NHANES

In brief, the authors of this study collected data from ~3,000 normal weight Koreans and divided them into two groups: ‘metabolically healthy normal weight (MHNW)’ and ‘metabolically obese normal weight (MONW)’ (remember everyone in both groups had a ‘healthy’ BMI; overweight and obese people were specifically excluded).  MONW was defined as having a waist circumference > 90cm (35″) for men or >80cm (31″) for women and at least 3 out of the next 4 criteria: elevated triacylglycerols, low HDL, hypertension, and impaired fasting glucose.  Basically, MONW is the Metabolic Syndrome for skinny people.

Disclaimer: The MONW population differs from MHNW in more ways than their diet and metabolic profile, and these differences probably have a lot to do with why they eat what they eat.  For example, MONW are less educated and makeless money than MHNW.  But for the purposes of this blog post, it is not why they eat what they eat, but rather what they eat.  And as seen in the table below, MONW eats fewer calories per day and a higher proportion of carbohydrates than MHNW (at the expense of protein and fat).

MONW ingests less protein (78 vs. 67 g/d) on an absolute basis, which is most likely why they have more fat mass at the same body weight (lower protein intake accommodates less muscle mass).  And it is this lower protein intake that most closely correlates with being metabolically obese:

Importantly, these odds ratios were controlled for confounding variables such as age and gender.  The last analysis is probably the most interesting, and it breaks down the risk of being metabolically obese by the intake of each macronutrient (in quartiles) for the entire population. 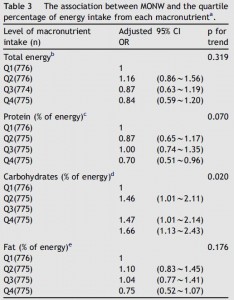 Increasing intakes of total energy, protein, or fat do not increase the risk of being metabolically obese.  Only carbohydrates significantly increased the risk across all 4 quartiles of intake.  The tolerable upper limit of carbohydrate intake was statistically extrapolated to be 59.9% of calories… which is within the recommended range of 55% – 70%.  IOW, by following the government’s dietary recommendations you will be significantly increasing your risk of metabolic derangement.  A prudent recommendation, based on these data, would be more like “less than 50%” (since no lower limit or deficiency was established).

Last but not least, and I’m not sure why, but the metabolic derangements associated with a low protein high carbohydrate diet were far more severe in women than men.

So the take-home message?  A low protein, high carbohydrate diet was significantly associated with metabolic deterioration, and this was most likely not simply correlative.  No, I contend this dietary pattern caused metabolic obesity.

One final note before moving on:  this study was specifically not looking at causes of obesity.  Obese and overweight people were excluded and this study focused solely on lean individuals.  Therefore we can’t conclude that any of the variables that cause metabolic obesity also cause weight gain… although they might (and probably do), the study was simply not designed that way.

If you’re reading this, please re-assess diet, blood parameters, insulin sensitivity, and body composition in these subjects in 5-10 years and report your findings.  I am very curious to see how metabolic obesity affects health outcomes.

In a similar study on the NHANES III data (United States), Zhu and colleagues analyzed risk factors for the metabolic syndrome across a wide range of BMIs.  In order to be more directly comparable to Choi’s findings, we’ll only consider the subjects with a health BMI (less than 25).

The table below is divided by gender, regression analysis (Model 1 is the most direct correlation, while Models 2 and 3 control for a variety of confounding factors), and carbohydrate intake (less than 30% of total calories, 30-60%, and greater than 60%). 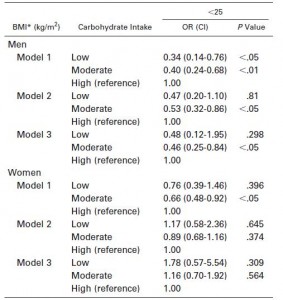 The correlation between MONW and a high carb intake is stronger for men than women, but present in both.  For men, the association is not weakened by controlling for confounding factors (age, race, education, and income).  For women, the association is present in the general population (Model 1) but no longer exists in Models 2 and 3.  In both men and women, a high-fat diet was associated with lower risk of MONW in Model 1 but not 2 or 3.

In Choi’s study on a Korean population, a high carb and low protein diet was associated with MONW, with a smaller influence of low fat.  In Zhu’s study on an American population, high carb and low fat were associated with MONW and protein intake wasn’t analyzed.  Collectively, these results suggest that lean people eating a diet high in carbs but low in protein and fat are the most likely to have metabolic abnormalities and possibly may be unwittingly diabetic.  Skinny on the outside, fat on the inside.  A carbohydrate intake greater than 60% of total calories significantly increased the risk of MONW in Choi’s population, while an intake of less than 30% significantly decreased the risk in Zhu’s study.  Greater than 60% = bad.  Less than 30% = good.

This entry was posted in Advanced nutrition, Dietary fat, Protein. Bookmark the permalink.