OK, FTR I don’t think any amount of TV watching will kill you, and I think that any study showing otherwise is under the control of some major food company , big pharma, or downright statistical sorcery.

First, a meta-analysis.  Not good.  The first paragraph in the intro starts out with [sic]: “40% of daily free time is occupied by TV viewing within several European countries.”  At first, 40% seems like a lot; how much “free time” do we really have?  Sleep 8 hours, work 8 hours, commuting to and from work, chores, eating, showering, etc… so maybe 3 hours of free time?  40% of 3 hours = 1.2 hours.  But the authors cite “4 hours” of TV viewing which means these people have almost 7 hours of free time per day… which means commuting to and from work, chores, cooking & eating, showering, etc. only takes about 1 hour (unless they either don’t work or don’t sleep.  IOW 7 hours seems like a horrendous overestimate.  There are a few other inconsistencies in the intro, but rather than spend more time nit-picking, on to the data:

To make a long story short, every additional 2 hours of TV viewing per day increased the risk for:

And just to be clear: yes, those are very very small numbers.

The authors searched relevant databases for every study on the topic, excluded the ones that didn’t support their hypothesis (jk… kind of*), and then independently analyzed the resulting studies.  Any disagreements were “resolved by consensus,”  which I’m not exactly clear how is accomplished when there are only 2 authors (rock, paper, scissors?).  In their favor, whenever possible the data were analyzed with and without diet and body weight in their multivariable-adjusted models.

As seen above, increasing hours of TV viewing is associated with increasing risks for diabetes, CVD, and all-cause mortality.  Yikes!

Risk for all-cause mortality was less than CVD and diabetes and wasn’t affected by diet or body weight.  The inflection was around 3 hours…  which means that the risk dying isn’t appreciably increased by TV viewing if you watch less than 3 hours per day.  Phew!  (the applies to adults only).  In sum, 3 hours seems to be a safe amount of TV for lean healthy people; less if obese or pre-disposed to diabetes.

Something similar was found in an EPIC study. 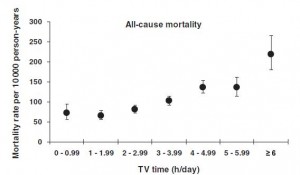 Although the overall risk for all-cause mortality associated with increased TV was about a third less than in Hu’s meta-analysis, it was 1) statistically significant, and 2) unaffected by diet or body weight (similar to Hu’s findings).

The relationship between TV viewing and all-cause mortality was attenuated after controlling for a variety of confounding factors (HR Model A = 1.08, p<0.001; HR Model B = 1.05, p=0.01), which means that someone who watches a lot of TV also has other risk factors which contribute to their risk of dying that have nothing to do with TV (like smoking, for example… unless they smoke because of the show their watching [?]).

one from down under:

In AusDiab, TV increased the risk for all-cause mortality slightly moreso than EPIC-Norfolk, but was similarly attenuated by controlling for other risk factors: 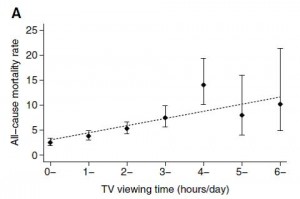 Oddly, there is a blip at 4 hours in both AusDiab and EPIC-Norfolk.  I have no idea what this means, but it is very interesting that in both England and Australia, people who watch 4 hours of TV per day have a higher risk for all-cause mortality than those who watch for 3 or 5 hours… if you find that you’ve spent 4 hours watching TV one day, throw on a pot of coffee and watch another hour.  Food for thought.

WRT health outcomes, excessive daily TV viewing seems to be a marker for other risk factors such as obesity, smoking, etc (may even be an indirect marker for ‘family history of CVD, diabetes, etc.).  TV watching per se is not the problem, nor is I suspect the TV.  Eat less, move more?

This entry was posted in Advanced nutrition, Exercise. Bookmark the permalink.