#IntermediaryMetabolism (bear with me here)
Ketosis from liver’s perspective:  increased fatty acid influx & [partial] oxidation causes acetyl-CoA levels to rise dramatically.  Concomitantly, gluconeogenesis redirects oxaloacetate (OAA) away from combining with acetyl-CoA via TCA cycle citrate synthesis and toward gluconeogenesis.  Since the acetyl-CoA doesn’t have much OAA with which to couple, it does itself to make acetoacetate.  Ergo, ketosis, and fortunately liver lacks ketolytic apparatus. 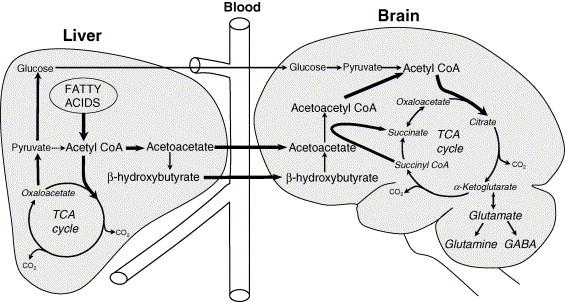 Brain is singing a different tune.  Ketones provide ample acetyl-CoA and are efficiently metabolized in the TCA cycle.  Ketolysis is not ketogenesis in reverse, else liver would consume ketones. 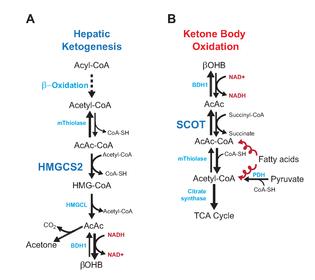 Teleologically speaking (and I don’t really know what that word means), ketones are meant to spare glucose for the brain by replacing glucose as a fuel for peripheral tissues like skeletal muscle and displacing some brain glucose utilization.  The former is vital as one of the few sources of “new” glucose is skeletal muscle amino acids, and they would be exhausted in a short amount of time if skeletal muscle kept burning glucose –> incompatible with survival.  Getting some of that fuel from fatty acids, ie, ketones, is just way better.  Thus, the “glucose sparing effect of fat-derived fuel.”  And by “glucose,” I mean “muscle;” and by “fat-derived fuel,” I mean “ketones.”  There are numerous intracellular signaling events and biochemical pathways pwned, but that’s the gist of it.

Running brain on ketones considerably impacts amino acid metabolism, or more specifically neurotransmitters.  Ketogenic diets –> neuroprotective and improve cognitive function, improve behavior in epileptic children, and even efficacious in bipolar disorder.  Many of these effects could be attributable to alterations in glutamate and gaba signaling.  Excitotoxicity.  brain fog.

Glutamate and gaba are two of the most quantitatively important neurotransmitters.  Glutamate can come from a transamination reaction or glutamine via phosphate-activated glutaminase.  It’s an expensive enzyme; one in which a few miscalculations in the lab can literally waste thousands of  a few of your tax bucks (ie, the kind of stuff that could’ve theoretically happened here) (sorry).  As it goes, glutamine is deaminated to glutamate, which is transaminated to alpha-ketoglutarate (aKG) or decarboxylated to gaba.  Glutamine is a precursor for glutamate and consequentially, gaba.  Glutamatergic neurons convert glutamine into glutamate, and gabaergic neurons convert glutamine to glutamate then via GAD to gaba (both of which can be recycled back to glutamine in astrocytes). 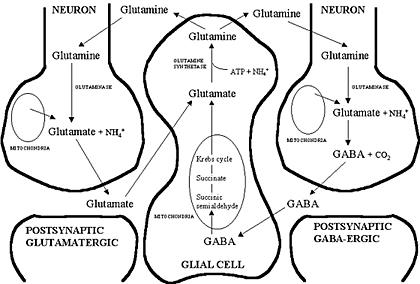 This could lead to elevated levels of glutamate (bad; excitotoxicity), but during ketosis, brain glutamate metabolism is apparently biased toward glutamine synthetase and GAD instead (both good).

Glutamine synthetase (GS)  mops up excess ammonia, which is thought to be a cause of brain fog at moderate levels and encephalopathy at high levels.  GS also detoxifies excitotoxic glutamate.  And GAD produces the calming neurotransmitter gaba. 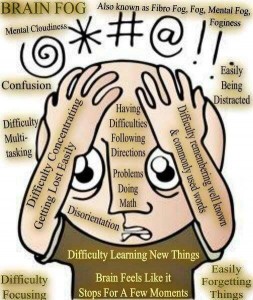 Why no stellar data showing dramatic changes in vivo?  Speculation: said changes would be small and restricted to specific brain regions.  Total levels of glutamate & gaba might not even be altered, just flux and secretion patterns which would be difficult to detect.  However, this hasn’t stopped some review articles from saying these changes occur unequivocally (eg, Ruskin 2012), so maybe I’m wrong.  I’m still not going to bother trying to find studies where they dunk poor unsuspecting mouse into liquid nitrogen to prevent stress or anesthesia-induced alterations in extracellular neurotransmitters.   They probably exist, but I’m basing these assumptions on #IntermediaryMetabolism.

I suspect ammonia & glutamate are rather important in the etiology of brain fog due to the high sensitivity of Jane Plain’s brain to ketosis and dietary protein.

Glutamate and gaba are two ways ketosis may impact brain fog, but dietary protein might do so by a different mechanism: ammonia.

Ketogenic diets don’t include many bifidogenic foods.  Subtle alterations like this can lead to big changes in the way food is metabolized – some bugs love protein but hate nitrogen, or at least get rid of it via urease which creates ammonia.  Too much of this  = brain fog.  Forgetfulness, confusion, irritability.  Insomnia.  Ketogenic diet-induced increase in brain glutamine synthetase could likely take care of some, but may not be enough if dietary protein is too high.  And it isn’t frank encephalopathy, but rather some form of “clouding of consciousness.”   Although perhaps not so coincidentally, one way of managing hepatic encephalopathy is the bifidogenic laxative lactulose

What about brain fog, treatment?  Ketogenic low protein diet, just like Mrs. Spratt (certainly not her husband)… although we suspect her problems were caused by an inherited disorder in the urea cycle.  Galactooligosaccharides (GOS) would work here because they have a strong potential to reduce urease-producing microbes.  And in at least one study (Malaguarnera 2007), bifidobacteria

[to journal editors who don’t understand medical conditions at which you can’t throw a statin or PPI (the latter being far worse in this case)].

Given that finding, I’m confident GOS would work better for two reasons: 1) supplementing live bifidobacteria requires financially restrictive doses to have an impact; and 2) GOS is far more bifidogenic than both inulin and actual bifidobacteria-based probiotics.

–> “Psychobiotics: a novel class of psychotropic” <–

In sufferers of brain fog, the tolerable level of dietary protein might just be dependent on architecture of the gut microbiome and degree of ketonemia.  Zhang and colleagues showed a linear relationship between brain ketone usage and blood ketone levels

, and higher ketone usage could enhance clearance of glutamate and ammonia (2013).

To this end, MCTs or coconut oil may even facilitate the tolerance of brain fog to more dietary protein.  Throw in some galactooligosaccharides and we just might be on to something… I’m thinking a dark chocolate product supplemented with 3% GOS & 10% MCTs.

Dark chocolate is an optimal vessel for prebiotics <– FACT, and some companies are already keen to this.

Those percentages are negotiable, but 100 grams would provide a dose of GOS that is well-tolerated and remarkably bifidogenic.  MCTs at 10% should be OK, but if you love too much of this delicious chocolate, then too much more could cause digestive problems.