There are enough connections here to suggest it’s an interesting rabbit hole.  Besides the effects of ARBs & desmopressin on mood and cognition, blood pressure regulation is not interesting <– fact.  But if it ties into fertility, circadian biology, and seasonal changes in how we should be doing things…

Way back in 1998 when I was graduating high school, Murphy and colleagues were screwing with “light-entrainable” and “food-entrainable” oscillators of circadian rhythmicity (1998).  They did this in two lines of rats, one with intact vasopressin signaling and one without.  With little mechanistic work, they showed vasopressin mediates circadian effects driven by light; and rats without vasopressin were more entrainable by meal timing.  N.B. in addition to the posterior pituitary, vasopressin is also found in the famous circadian light-regulated SCN neurons (Rosving 2010).

While it is speculated to play a role in social behaviors and sexual motivation, vasopressin is primarily known for its anti-hypotensive effects.  When plasma volume drops, vasopressin is secreted to decrease urinary water loss and increase blood pressure.  This is antagonized by alcohol, which is thought to be one reason why alcohol can dehydrate you.

Fast-forward to 2013 and we have mice genetically deficient in vasopressin receptors (Yamaguchi et al., 2013).  These amazing lil’ critters are genetically resistant to jet lag.  When normal mice fly from New Jersey to Moscow, or from California to England (ie, 8 hour phase advance), it takes 8-10 days to adapt.  Flying between New Jersey & California about a dozen times in the past few years, I concur: it’s only a 3 hour difference, but the phase advance going to New Jersey requires 3 or 4 days to adapt.  And trying to remedy this with melatonin or red wine is futile (the former likely works form some although imo the latter is more preferable [which admittedly has little to do with circadian biology]).  Perhaps experimentation with a few pickles or something to bolster plasma volume is warranted (?).

Taking vasopressin receptors out of the picture is nothing short of a game changer: 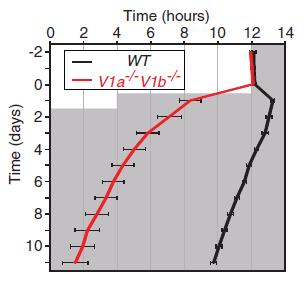 The mice adapt practically overnight.  Circadia got got; vasopression makes you a slave.

Nelivaptan pwns vasopressin and corrects circadian dysrhythmia.  Right now, it looks like vasopressin is a bad guy.  What else do we know about NevilaptanMan? (it’s a vasopressin antagonist)

Anxiolytic and antidepressant effects of nelivaptan suggest an innovative approach for the treatment of stress-related disorders (Griebel et al., 2002)
“…nelivaptan improved the degradation of the physical state, anxiety, despair, and loss of coping behavior produced by stress.”

An overview of nelivaptan for the treatment of stress-related disorders (Serradeil-Le Gal et al., 2005)
(these tie-ins with stress are not unexpected; vasopressin directly stimulates ACTH secretion.)

So there’s a link between circadian biology & affect, and vasopressin to both of them.  “CRY2 (circadian clock gene) variants associated with depression… involved in the transient antidepressant effect of total sleep deprivation.”  Next up: fertility.

What is it with blood pressure regulatory peptides?  Angiotensin, another anti-hypotensive hormone, is speculated to be involved with bipolar mania and depression: Angiotensin receptor blockers for bipolar disorder (de Gois Queiroz et al., 2013).   This class of drugs is well-known for brain anti-inflammatory & neuroprotective effects, as well as anxiolysis & antidepression.  These same drugs show circadian patterns in efficacy –> they work better when taken at night (de Giorgi 2013), and at least one group of researchers has proposed an “angiotensin-melatonin axis” (Campos et al., 2013): 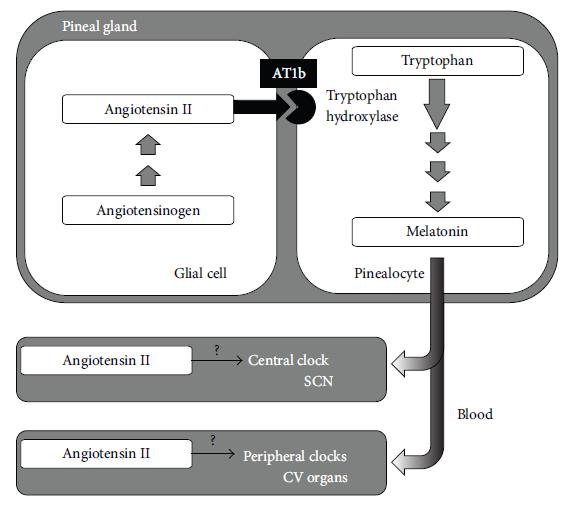 With regard to the abovementioned speculation about vasopressin and fertility, for what it’s worth, angiotensin is also involved in reproductive success (abstract blazing: Vinson 1996  & 1997 , Hagaman 1998, & Speth 1999).

Are all these things related, important, and susceptible to biohacking?  I don’t know.  At this point, it’s somewhat of a black box [to me].  Would messing with blood pressure enhance adaptation to phase shifts?  Are pickles the new old wives’ tale to enhance fertility?  Are SCN vasopressin and posterior pituitary vasopressin two completely different beasts?!  A lot of questions, and I’m a little disturbed by the fact that one of my blog posts might actually end with “pickles.”

Also not sure if this is something we should tamper with because desmopressin has been shown to improve various parameters of memory and cognitive function in: children with attention & learning disorders; children with nocturnal enuresis (bet wetting); schizophrenics; and healthy young adults.