overeating ANYthing is a bad idea.  But as demonstrated in this recent study, WHAT you overeat has a big effect on how your body responds.  The overfeeding protocol studied was pretty intense, ~1000 excess kilocalories per day for 8 weeks.

Effect of dietary protein content on weight gain, energy expenditure, and body composition during overeating (Bray et al., 2011 JAMA) Healthy people where fed hypercaloric low, medium, or high protein diets.  It’s impossible to isocalorically change one macronutrient without inadvertently changing the others.  With regard to study design, this is always a tough decision, and in this study they exchanged protein for fat:

As seen in the monster-table above or simplified table below, the high protein group gained the most weight despite eating no more than the other groups; but this weight was comprised of significantly more lean body mass than in any other group.

High protein dieters also expended more energy but still gained more weight!  Importantly, however, much of that weight was muscle.  The increase in energy expenditure is likely due to dietary protein-specific effects: 1) high metabolic cost of increased protein turnover, 2) elevated metabolic rate associated with more muscle, and 3) increased diet-induced thermogenesis.  The low protein group, on the other hand, lost muscle and gained more fat than any other group.

an aside: the energy expenditure measurements taken during overfeeding should be taken with a grain of salt, shot of tequila, and suck of a lemon because the accuracy of such measurements usually require weight-stable conditions; overfed subjects were gaining weight and in positive energy balance.  In other words, the assumptions required for doubly-labeled water to assess energy expenditure during weight-stable conditions are likely not met during weight gain (which is further complicated by the fact that the different groups were gaining different types of body weight [fat vs. fat-free mass]).  But the body composition data are probably OK (see below).

Furthermore, while it may seem like the Laws of Energy Balance were violated in this study, I assure you, they were not.  This study was not designed to test them, as evidenced by the author’s failure to conduct a comprehensive assessment of energy balance.

The high monetary cost of high protein foods (e.g., steak) is matched by the high energetic cost of their assimilation.  By increasing protein intake, energy expenditure rises in parallel.  This is most likely due to a combination of factors (mentioned above), and the result, at least in this study, is increased lean body mass.   The low protein diet, on the other hand, didn’t increase energy expenditure and resulted in more fat gain.  N.B. the absolute amount of protein consumed by the low protein group (47 grams) was too low to maintain muscle despite ingesting 40% more total calories.  In other words, the low protein dieters actually lost muscle mass while gaining fat!!

1. THE media always screws up things (no thanks to Dr. Bray’s discussion).  The headlines should’ve read: “Dietary protein increases lean body mass more than total calories increase fat mass.”  That headline would’ve taken the focus away from the calorie debate by highlighting an important macronutrient effect.  This is important, IMHO, because body composition is a very important factor determining metabolic outcomes and quality of life, and is often overlooked (e.g., BMI).

Most of the excess energy consumed by the low protein dieters was stored as fat, while in the high protein dieters it was invested in muscle and burned off.  Although it’s a little too late to prevent holiday feast-induced weight gain (or the freshman 15 for that matter) these data suggest that whenever possible, filling up on the highest protein foods available will cause the least fat gain.  Increased dietary protein -> increased lean body mass –> increased metabolic rate (you burn more fat in your sleep!)

Dietary protein doesn’t require a prescription and is a potent nutrition partitioning agent.  But as mentioned above, WRT energy balance, this study was not perfect.  So, why do I believe the effects of dietary protein are true despite the methodological flaws in Dr. Bray’s assessment of energy balance?  Because they are consistent in a variety of conditions.  For example, the remarkable effects of a high protein diet on body composition prevail even during underfeeding (aka going on a diet), a completely opposite paradigm. 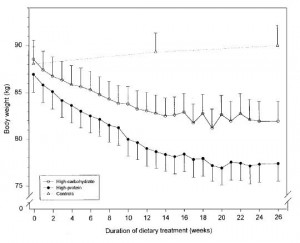 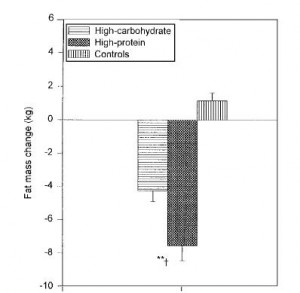 And similar results, albeit less robust due to the shorter duration, were found in a study by Layman and colleagues in as few as 10 weeks (Layman et al., 2003 Journal of Nutrition) 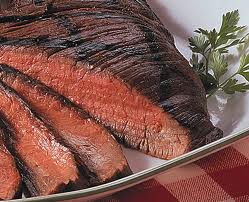 head over to Patreon! Five bucks a month for full access. It’s ad-free and you can cancel at any time.