The malevolence of regular (non-diet) soda

Visceral fat is associated with insulin resistance, which is a precursor to type II diabetes.  So, what causes fat storage in visceral adipose tissue (besides hyperinsulinemia)?

If you just started drinking a few cans of soda per day without intentionally changing anything else, this is what would happen.  The control groups got milk (isocaloric), diet soda, or water.  Food intake and physical activity was similar at baseline and during the intervention.

And from what we can infer, these effects were independent from energy balance (similar food intake and physical activity before and during the intervention).  Food intake data weren’t presented, but we’re told it was similar in all four groups.  Given these food intake-independent changes in body weight, energy expenditure data would have been a great addition to this manuscript.

The exoneration of diet soda?  In this study, the diet soda group seemed to win, with the best overall changes in body composition as per percent body fat. 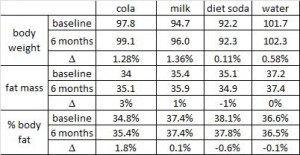 Food intake data should’ve been presented and measurements of energy expenditure would’ve added a lot.  The composition of the beverages and resulting changes in body weight/composition suggest no major deviations in the Laws of Energy Balance, and the changes in muscle mass make sense with what we know about dietary protein and sugar.  Furthermore, there is good reason to believe the observed malevolent effects of regular non-diet soda are true.

Similar results were seen in a well-controlled study where isocaloric glucose or fructose-containing beverages were given to overweight/obese humans for 10 weeks (Stanhope, Havel, et al., 2009 JCI): 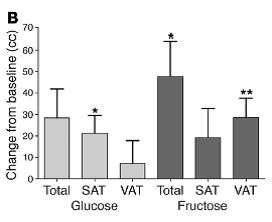 (waist circumference is a reasonably good marker for visceral fat)

The former studies have been of the [stronger] intervention type, but the same thing is seen in observational studies (Pollock, Dong, et al., 2011 AJCN).  This next study is of particular importance because it is in children.  The major sources of fructose were fruit juice and regular soda.  Elevated visceral fat is observed as early as 14-18 years of age!

What is most relevant about this study is that kids who drank the most fruit juice and soda were beginning to show signs of pre-diabetes and elevated inflammatory markers.  In kids.

there’s nothing redeeming about sucrose or its partner in crime fructose.

This entry was posted in Advanced nutrition, Energy balance, Fructose. Bookmark the permalink.