Coffee and cigars, the breakfast of champions

Or more specifically, caffeine and nicotine… or really just nicotine.  Today is about the lesser of two evils: nicotine, Mother Nature’s little helper (the other evil being cigarettes [not coffee]).  This curious little molecule is an anti-inflammatory memory boosting appetite suppressant.  If it didn’t screw with the reward mechanisms in your brain, it’d be a vitamin. 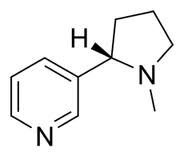 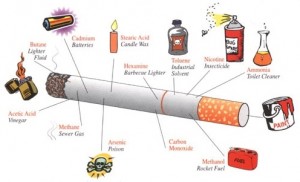 Exhibit A: Activation of the cholinergic anti-inflammatory pathway ameliorates obesity-induced inflammation and insulin resistance  (Wang et al., 2011) translation: “nicotine is good for mice.” 800 ug/kg for 3 weeks. In brief, this treatment in mice results in improved glucose tolerance and reduced systemic inflammation independent from changes in food intake and body weight (that dose is too low in mice to alter food intake and body weight): 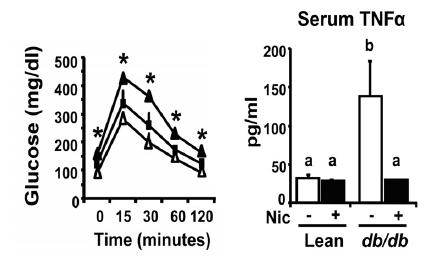 800 ug/kg is roughly 56 mg for a 70 kg (154 lb) adult.  That much given intravenously is fatal, but many smokers get almost just as much from cigarettes every day.  FYI one cigarette =~1.5 mg nicotine = blood nicotine ~15 ng/mL within 30 minutes.  Blood nicotine wasn’t measured in this study, so we really can’t say much about dose equivalency. Lastly, none of these effects were observed in a7 nicotinic receptor knockout mice.  FYI the upregulation of a7 receptors by memantine is partly responsible for its pro-cognitive effects (hint hint hint; future blog post).

Needless to say, the opposite is true for humans and cigarettes. 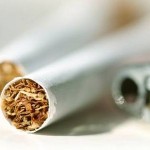 Exhibit B. Novel and reversible mechanisms of smoking-induced insulin resistance in humans (Bergman et al., 2012) After quitting for only 2 weeks, insulin sensitivity is almost returned to normal, suggesting any the metabolically beneficial effects of nicotine alone (in mice) are overpowered by the deleterious effects of cigarettes: 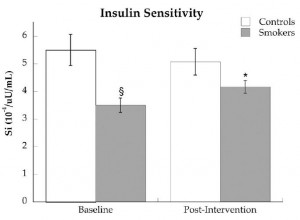 The authors estimated that reduced food intake accounted for 66% of the weight loss, while increased energy expenditure accounted for the other 33% (this is important, see below).  FTR reduced food intake usually causes energy expenditure to go down (not so much on low carb diets, however).  The anorexic effects of nicotine in mice appear to be due to a3b4 nicotinic receptors, which activate the melanocortin system via ARC POMC neurons (Mineur et al., 2011).  The new anti-smoking drug varenicline (Chantix) is a partial agonist of a3b4  receptors… perhaps this drug will finally solve smoking cessation-induced weight gain (hint: nope).

to wear for either 8 weeks followed by 16 weeks placebo, or 24 weeks straight.  At week 24, those receiving the patch for the entire time gained 2.5 pounds while those who only got it for the first 8 weeks gained 4.7 pounds (almost double).  Given the well-established effects of weight gain and subsequent diabetes on morbidity, mortality, and quality of life, cold-turkey is not the way to go.

Remember that finding that 33% of the weight loss in mice on nicotine was due to increased energy expenditure?  The same might be true for humans.

group gained half as much weight as control after quitting, despite eating more and exercising less!  While the techniques used to assess these parameters were less than ideal, these data contradict the theory that appetite suppression is the sole mechanism of nicotine-induced weight loss. 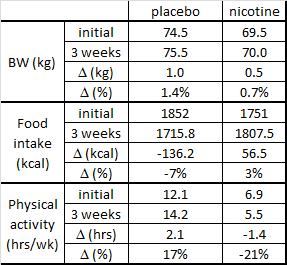 While both drugs helped people quit, neither varenicline nor bupropion had any significant effect on weight gain, which was 2.37 kg for those assigned to varenicline, 2.12 for bupropion, and 2.92 for placebo.  Furthermore, the side effects of bupropion caused twice as many people to discontinue treatment than varenicline and placebo, while varenicline caused nightmares.

: +1
Quitting smoking causes weight gain, which increases the risk for diabetes and attenuates the expected improvement in lung function. Don’t judge a book by its cover; nicotine is a healthier addiction than cigarettes.