The curious effects of calories in mice

What is the biological impact of a history of obesity and weight loss?  The metabolic trajectory of two calorically restricted skinny mice depends entirely upon whether or not they used to be fat.  The end of this story might be: ‘Tis better to have lost and re-gained than never to have lost at all; or it’s just an interesting new take on the body weight set point theory. 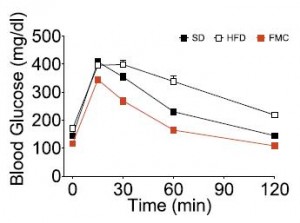 Mice that overate (HFD) were more glucose intolerant than mice fed the standard diet (SD).  But mice that didn’t overeat (FMC) were the most glucose tolerant of all.  That’s interesting in and of itself, but the important point is that despite being eating the obesogenic HFD, FMC were never allowed to get fat.  So when body weight is controlled, glucose tolerance is better on a high fat low carb diet relative to a low fat high carb diet.

Same diets, but some of the HFD mice were switched to calorie restricted versions of the SD (“CR-SD,” green squares) or HFD (“CR-HFD,” blue squares):

Conclusion of part 1.  A history of weight loss has beneficial effects on glucose tolerance; CR-HFD mice weighed just as much as the SD and FMC mice, but since they had just undergone weight loss, they were metabolically healthier.

Part 2.
Study 3.  Calorie unrestricted: the effect of a history of obesity on weight gain and metabolic health. 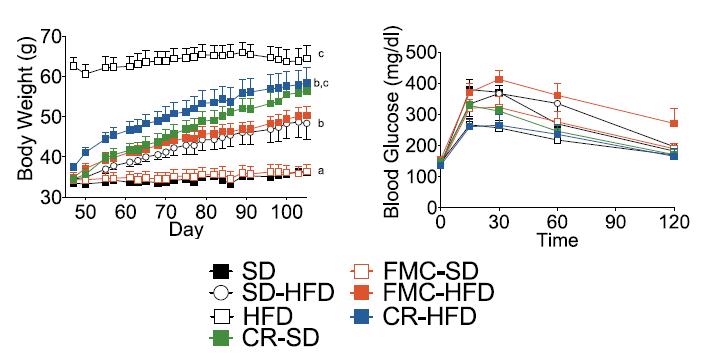 The solid blue squares represent mice that got fat on HFD, lost weight on CR-HFD, and then gained it back on an unrestricted HFD.  Despite gaining back their weight, they’re the most glucose tolerant because a history of weight loss seems to have a lasting protective effect on glucose tolerance – a legacy effect?

The green squares represent mice that got fat on HFD, lost weight on a calorie restricted low fat diet, and then gained it back on an unrestricted low fat diet.  They are less glucose tolerant than CR-HFD mice who underwent a similar crash diet because they were eating more sugar (I think).

The FMC-HFD mice were fed a calorie restricted HFD and never got fat, then went on a bender.  Since they didn’t have a history of obesity, their body weight set point wasn’t very high and they didn’t gain that much weight.  But the simple act of gaining weight worsened their glucose tolerance.  A history of weight loss predisposed to weight re-gain but had a legacy effect on glucose tolerance in CR-HFD mice.

From the data: comparing FMC-HFD, who were calorically restricted but never fat, to CR-HFD, who were obese then calorically restricted: CR-HFD mice gain more weight than FMC-HFD mice because their history of obesity increased body weight set point.  And the point about glucose tolerance is made from the observation that despite gaining more weight, CR-HFD mice have better glucose tolerance than FMC-HFD mice because of their history of weight loss.

Come to think of it, this study was rather complicated; any alternative interpretations out there? (i can think of a few, but this post is getting too long)