Hyperinsulinemia.  Whether it’s caused by insulin resistance, too many carbs, or industrial insulin secretagogues found in processed foods, high insulin levels are problematic.

Octreotide is a synthetic version of somatostatin and it inhibits the secretion of a variety of hormones, namely insulin.  A group of researchers set out to determine the effects on obesity of pharmacologically lowering insulin via octreotide.  In this setting, it doesn’t matter how insulin became elevated in the first place, only whether reducing it has any impact on obesity.

This was a population of relatively young (~40-ish), fairly heavy (~240 lbs), but otherwise healthy subjects.  And most of them stayed in the study for the entire duration (which means, in part, that octreotide isn’t an unpleasant therapy).

To make a long story short, octreotide worked, but not very well…

In the table above, the “mean percent change from baseline” was less than 2%, which amounts to about 4 pounds (in 6 months).  As a graph (note the ordinate): 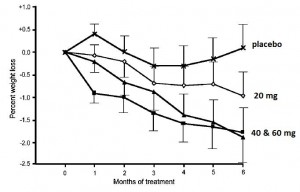 But the treatment was well-tolerated, and a variety of quality of life measurements were significantly improved, such as physical function, self-esteem, and sex life.  And interestingly, “carbohydrate cravings” were significantly reduced, which suggests the possibility that high insulin levels may in part be self-promoting.

Although a more selective drug would have been preferable to the pan-inhibitor octreotide, another interpretation of the modest weight loss results presents itself.  A recent study by Willett, which I previously blogged about showed that in general, people gain about a pound a year and some of the largest contributors to that weight gain are potatoes, potato chips, and French fries.  All three elicit a robust insulin response, and the latter two most likely contribute to other metabolic abnormalities which also lead to elevated insulin levels (insulin resistance, insulin hypersecretion, etc).  The current study demonstrated the possibility that high insulin levels, per se, might be an important cause of weight gain or the maintenance of an obese state.  AND carbohydrate craving was reduced by octreotide.  Willet’s study showed that foods like potatoes, which cause high insulin levels, are associated with weight gain.  Lustig’s study showed octreotide reduces insulin levels, which reduces carbohydrate cravings and leads to weight loss.  Abandon carbs?  Monthly octreotide injections?  Going on the Atkins diet would cause a much more rapid weight loss than octreotide, but octreotide therapy would cause literally zero lifestyle disruption… and the speed of weight loss would be closer to the how fast the weight came on in the first place.

On a more philosophical note, there is a subtle continuity between the magnitude of weight change and the foods implicated in Lustig’s and Willet’s studies.  On one hand, the most influential foods associated with age-dependent weight gain were starchy carbs (which induce insulin secretion); on the other hand, lowering insulin via octreotide reduced carbohydrate cravings and caused weight loss.  It’s difficult to clearly connect these observations with eloquence, but they seem to suggest a strong correlation.  The rate of weight gain associated with ‘potatoes, et al.’ was slow, similar to the rate of weight loss with octreotide…

So if you likened the cause of obesity to an elusive rogue criminal mastermind, and the cure to a cunning stealth superhero, then you’d be unimpressed with “potatoes” and “a few pounds gained or lost.”  …  obesity doesn’t happen overnight.