About a decade ago, Michael Brownlee posited that AGEs were one of The Four Horsemen responsible for the microvascular complications of diabetes.

Thereafter, the image below (or a closely related one) appeared in at least one talk at every major diabetes conference for about 5 years.  Then it faded – maybe not because it is wrong, but rather just too simplistic to be useful (similar to CICO & ELMM).

AGEs are created by reactions between reducing sugars (eg, glucose, galactose, etc.) and amino acids, fats, and nucleic acids.  There are two fundamentally different sources: 1) endogenous, formed as a normal biological process; and 2) exogenous, present in [mainly animal] foods, depending on cooking temperature.  A low level of exposure is normal and likely harmless, although excessive exposure can be inflammatory and promote oxidative stress.  The latter can conceivably come about via chronic hyperglycemia or eating a lot of cooked/seared/burnt meat (AGEs are very low in most plant foods, cooked or not).

If there is any pathological effect of AGEs, I suspect: 1) it will be restricted to hyperglycemics who eat a lot of burnt meat; and 2) it’ll be difficult to dissociate which is more important (ie, endo vs. exo AGEs).  See review by Han and colleagues for further discussion of this (2013).  There are some interesting differences, eg, endogenous AGEs take much longer to form – they require chronic hyperglycemia – whereas exogenous AGEs can form very rapidly on the surface of a seared steak because of the higher temperature.  However, the difference between endo and exo AGEs is beyond the scope of this article, and I honestly don’t know if the truth of it has been adequately fleshed out.

For a comprehensive list of the AGE content of foods, see the paper by Uribarri and colleagues (2010).  But in brief, different foods can have anywhere from ~0 to about ~20,000 “units” per serving.  So we may get about 10 million “units” per day on average?

In 2002, Vlassara and colleagues tested the effects of 2 diets varying 5x in AGE content on a diabetic population (3.67 vs. 16.3 million AGE units/day) (Vlassara et al., 2002).  The AGE content was manipulated by varying the cooking time and temperature.  Since this affects many aspects of the food, it might have been better to just take two identical diets and spike one of them with AGEs, but there are easily arguments supporting both sides of this decision.

To confirm these two diets did in fact differ in AGE content:

…interesting, given  the meal differed 5x in AGEs… but the units are moving in the right directions.

At the end of the first half of this study, a 2 week crossover, there were few metabolic effects, although the high-AGE diet negatively impacted some inflammatory markers:

In the 6 week follow-up study, fasting glucose deteriorated in the high-AGE group and significantly improved in the low-AGE group:

Not a very damning study, but this piqued my interest.

In 2014, Tantalaki and colleagues assessed the impact of a high or low AGEs diet in a population of weight-reduced PCOS patients (Tantalaki et al., 2014).  The study design was odd, but it didn’t entirely preclude the ability to draw meaningful conclusions.  Design flow: “baseline assessment -> weight loss phase (2 months) -> high AGE diet (2 months) -> low AGE diet (2 months).  Dietary AGEs were 10.9 million at baseline, 9.6 during the weight loss phase, 16 on the high AGE diet, and 5.7 on the low AGE diet.  So, the design was inferior to Vlassara (no crossover and a smaller difference in AGEs between the groups), although this patient population experienced significantly greater improvements by restricting AGEs:

The study is obviously confounded, although many of the changes in metabolic parameters mirror changes in serum AGEs and move in the expected directions: 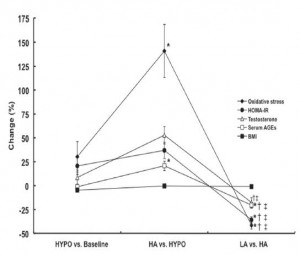 Also, the difference in dietary AGEs is clearly reflected in changes in serum AGEs, in both studies (although to my knowledge, this isn’t 100% consistent):

From what I can gather, the levels of AGEs used in these studies is physiologically relevant.  Sure, this kind of thing is painfully confounded – big differences in cooking temp alter much more than AGEs; also, in real life, AGE content varies widely dependent on the food and its macronutrient composition.

After 6 weeks, the most robust findings were changes in dietary AGE intake (by design), and significantly reduced levels of TNF-alpha (a pro-inflammatory cytokine) and malondialdehyde (a marker of oxidative stress) in the low-AGEs group.

And mixed impact on metabolic parameters:

For patients with hyperglycemia (and thus most likely a higher baseline level of AGEs), a plant-based diet with meats prepared rare or medium-rare whenever possible might help; and lower the carbs to reduce blood glucose.  Check out the paper by Uribarri… this is NOT a restrictive diet.

Disclaimer: my impression is that if you’re lean and healthy, dietary AGEs aren’t a concern (they may not be an issue if you’re not healthy, either, although the jury is still out on this.  See below.)  All of the above data are from patients predisposed to metabolic dysregulation.  And this study showed no significant impact on inflammatory markers in healthy adults after dining on AGE-restricted diets, whereas this one showed only a modest increase in oxidative stress in overweight but otherwise healthy adults.

In patients with more severe conditions, monitoring dietary AGEs might be warranted… especially because it’s rather easy to do (a potentially high benefit-to-cost ratio), because:

Note: if the number of review articles on a given topic greatly exceed the number of primary studies, then that might be the makings of a molehill, not a mountain.

have shown mixed effects, and even worsening of symptoms in one case (ie, aminoguanidine, Freedman et al., 1999 and Engelen et al., 2013), the most reasonable approach, and possibly the furthest you might need to go: don’t eat burnt meat.  Easy peasy. 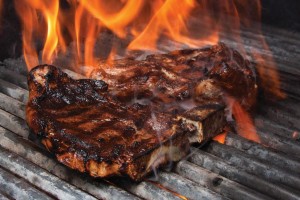 Great observation, as per usual  …and it’s probably true.   Or at least this may be the more potent driver contributing to the results above.  But I don’t think it’s the whole story,  because #1. the Tantalaki study: body weight remained stable yet oxidative stress increased during the high-AGE phase and returned to normal during the low-AGE phase.

#2b. Even more reductionist: exposing immune cells to AGEs enhances the secretion of inflammatory cytokines, and this is blocked by a RAGE antagonist (Shim et al., 2014).

#3. Slightly less reductionist: there is ONE rodent study where dietary AGEs were supplemented directly, in isolation, and all of the expected [negative] effects occurred (Cai et al., 2014)… this seems like an obvious thing that should’ve been done long ago.  And repeated in humans.

Regarding the relative importance of endogenously generated AGEs, which are correlated with (and likely caused by) chronic hyperglycemia:  restricting dietary carbohydrates is the best way to manage hyperglycemia.  It is known.  And interestingly, this study showed that beta-hydroxybutyrate (a ketone that is increased in the blood of people following low carb diets) can directly inhibit the formation of AGEs.

Conclusion: Quantitatively speaking, chronic hyperglycemia is obviously a much greater concern than dietary AGEs, and the human studies may even be systematically bollixed (see Jane’s observation, above).  The animal studies on RAGE don’t differentiate between endogenous vs. exogenous AGEs, although the Cai study suggests dietary AGEs may be a concern, if you like burnt meat.

You’ll have to pry my perfectly seared (medium rare) steak with charred crust from my AGE infested hands. http://t.co/bSyCnQsaQ0