Switch an athlete from their standard carbohydrate-rich diet to a low carb ketogenic one and suddenly performance tanks.  It is known.  Give them a few weeks to adapt, however, and it recovers.  This much was established for mainly endurance-related performance parameters by Steve Phinney and colleagues in the 1980’s (eg, Phinney et al., 1983).  Then, along came Antonio Paoli, Dominic D’Agostino, and others who showed a similar phenomenon in gymnasts, a population that routinely exercises at higher levels of intensity (Paoli et al., 2012).  Notably, in these studies the athletes were allowed adequate time to adapt to the new metabolic milieu – sometimes referred to as ketoadaptation.  Three weeks appears to be the minimum amount of time required for ketoadaptation; ie, studies of shorter duration generally show: low carb = poor physical performance.

…which is why I was surprised to see this one:

These researchers subjected ~30 strength-trained individuals to a battery of performance assessments before and after 7 days of a low carb [ketogenic] diet.  Usually I would’ve stopped reading at this point because 7 days is too short.  But there were some nuances in the way this particular study was designed which piqued my interest.

After a week of measurements on their habitual diet, the participants switched over to the experimental diet.  And as expected, the ketogenic diet induced a spontaneous reduction in appetite.  Food intake over the control and experimental weeks was as follows:

Since their normal training routines apparently didn’t change, we can safely say the [modest] changes in body composition were diet-induced.  The control, or habitual diet didn’t have any impact because these participants [theoretically] weren’t doing anything different.

Low carb dieters lost a little bit of weight.  Given the nature of carbohydrate restriction, some of the weight lost was water weight.  But given the caloric deficit & relative hypoinsulinemia, some body fat was lost as well (statistically significant in women only):

Lean mass was somewhat preserved, likely due at least in part to the increased protein intake.  Note that lean mass didn’t increase, which could’ve theoretically masked a negative impact of carbohydrate restriction on physical performance; it was merely preserved.

Instructions for the low carb group were simply to limit carbs to less than 50 grams.  They tried, but failed, to adequately compensate for the lost carbohydrate calories by eating more protein and fat.  Some might argue that this, the increased protein intake, may have confounded the results.  I won’t argue against that, but I don’t think it invalidates this study because: 1) it’s what would likely happen in real life; and 2) glycogen depletion without adequate ketoadaptation seems like a greater immediate detriment to physical performance than increased protein intake would be a performance “booster.”

The performance assessments: handgrip dynamometry, vertical jump, max bench press (1RM), 1RM back squat, maximum-repetition bench press power output, and Wingate anaerobic test.  Needless to say, these tests gave the researchers deep insight into the participants’ maximal strength and power output.  To put this in context, other studies have assessed time to exhaustion during a long slow bike ride or jog – the opposite of “high intensity.”

For the reasons mentioned above, we might have expected strength and power output to plummet.  This didn’t happen.  In fact, some of these measurements actually improved (modestly, albeit statistically significantly):

Nuance: the participants refrained from exercise for 48 hours prior to testing.  Not all studies do this.  Worded another way: a low carb [high protein] diet might improve strength and power output given adequate rest…  Or, eating less carbs and adding a few more rest days = increased training-induced gains in strength and power… any takers?!  Of course, this wasn’t assessed directly, and it’s difficult to say how much, if any, the added rest days contributed to the results.

Given the theories underlying the relationship between ketoadaptation and power output, I wouldn’t have been surprised to see these results had the study lasted longer than 3 weeks.  One possibility as to why it worked is that the process of ketoadaptation was expedited in these individuals because they were: 1) exercising; 2) eating significantly fewer carbs than in most other short-term studies; and 3) in an energy deficit… three well-known, potent ketogenic stimuli.  The added protein might have helped, also, and certainly wouldn’t have hampered ketoadaptation given their energy deficit.  But still, that’s putting a lot of stock into this process as being a major reason why the diet worked in such a short time.

What we know: weight loss is generally accompanied by a loss in strength and power output.  A counter-argument could be that some of the weight lost was water weight… although when has dehydration ever been shown to improve performance?  If anything, this would’ve had a net negative (or neutral) effect…

The authors speculated that the increased handgrip strength could’ve been due to the novice effect, because, despite the stereotype (at least in my experience), gym buffs don’t actually walk around squeezing a grip crusher… 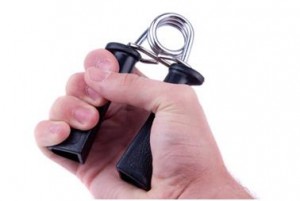 …but they should’ve been roughly familiar with most of the other tests… well, maybe not the Wingate test.  NO ONE SHOULD BE FAMILIAR WITH THIS TEST.

At this point, I don’t think this experiment was bollixed, and I’m not entirely sure how much the nuances and subtleties impacted the results.  And I’d still recommend any athletes who want to see if their performance improves on a low carb diet to stick it out for at least 3 weeks.  But this study certainly piqued my interest.

An abbreviated history of low carb diets and exercise – take a quick glance at the macronutrients, exercise routines, participants’ level of experience, rest periods, etc., etc. and you’ll see what I meant when I said these studies are very nuanced.  Or just bookmark ’em for future reference.

An isoenergetic high-protein, moderate-fat diet does not compromise strength and fatigue during resistance exercise in women. (Dipla et al., 2008)