They say if you’re going to [intentionally] skip a meal, it should be breakfast – and hey, that’s probably the easiest meal to skip.  However, a recent study showed skipping dinner FTW (well, not exactly).  I’ve never seen a proper study directly comparing the effects of skipping different meals, but here are a few that come close.  The findings may surprise you. 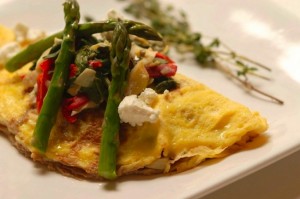 note: with the exception of Fernemark (Exhibit B), these studies are mostly macronutrient-controlled. That is, protein, fat, and carbs are similar between the groups; the only thing that differs is when they were ingested.  This can be tricky and/or very nuanced in some instances, like if dinner was smaller (fewer calories) but more protein-rich, for example… but in order to include 5 relevant studies and not bore you to death, you’ll have to check the full texts for those details.

This is the one that made headlines:

The study lasted 12 weeks and the researchers provided a LOT of the food for the participants.  They achieved a decent caloric deficit in both groups primarily by restricting fat intake.

Body weight and fasting blood glucose decreased more so in the participants who skipped dinner.  The authors speculated that more weight was lost because energy expenditure was better preserved, although I’d say it’s just as likely due to a greater reduction in food intake or a larger increase in physical activity, as each of these findings were equally statistically non-significant. 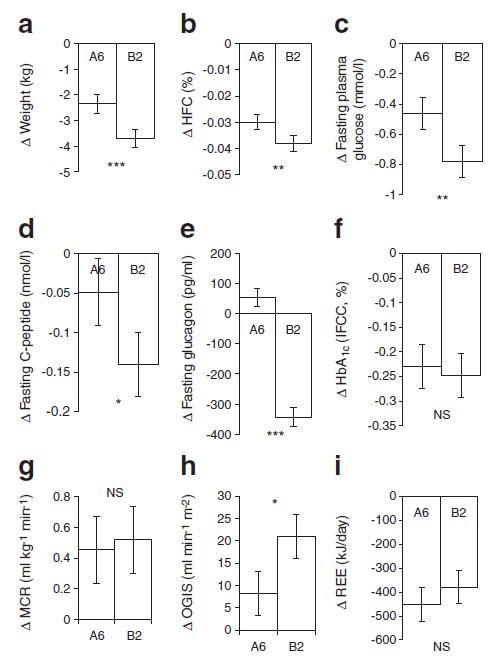 Next up: low fat vs. low carb vs. skipping breakfast (“Mediterranean” diet).  Hat tip to “Liberrocky” for this one (and for inspiring this post)… this is also the only study where macronutrient content was varied.

A randomized cross-over trial of the postprandial effects of three different diets in patients with type 2 diabetes (Fernemark et al., 2013)

This study is fundamentally different from the others because it only lasted one day.  And here’s how their glucose and insulin fared throughout said day (remember: low fat [solid lines] vs. low carb [big dashes] vs. skipping breakfast [small dashes]):

As expected, glucose remained low in those who skipped breakfast, then spiked just as high as those on the low fat diet after lunch.  And for the low carbers, glucose levels were moderate after breakfast and low after lunch, also as expected.  For the most part, insulin levels followed suit with the exception that they were modestly higher after lunch in those who skipped breakfast (Mediterranean dieters).  Physiological insulin resistance?  Maybe, but the Mediterranean lunch was twice as big as the low fat lunch.  So, perhaps it was exactly enough insulin to prevent hyperglycemia.

The insulin AUC was just as high in the breakfast-skippers as in the low-fat dieters, and significantly lower in the low carbers.

Low carb fared better than skipping breakfast in this acute scenario.  Some might speculate that skipping breakfast while following a low carb plan (as opposed to a higher carb Mediterranean diet) may have been better.  I won’t argue against that.

Total daily nutrient intake was similar in both groups, with the meals basically flipped – either a big breakfast or a big dinner.  It’s not skipping a meal per se, but the small meal (either dinner or breakfast) was very small (215 kcal)… pretty close to skipping a meal…

It’s not a direct comparison, but similar to the findings of Kahleova (skipping dinner FTW), this study showed a big breakfast was better than a big dinner for weight loss.  Much better:

It’s possible that Kahleova’s and Fernemark’s studies were less about skipping a meal at a particular time of day, dinner or breakfast, respectively, and more about intermittent fasting vs. different degrees of “grazing” …but Jakubowicz’s findings show that more calories earlier in the day produce better outcomes for weight loss and metabolic status, which is similar to Kahleova’s skipping dinner (which is essentially the same as having more calories earlier in the day).

Jakubowicz’s findings were mimicked almost exactly, albeit with less statistical significance, with this one:

What DID reach statistical significance, and is of arguably much more importance, was a greater reduction in anti-diabetic medication use in the big breakfast group: 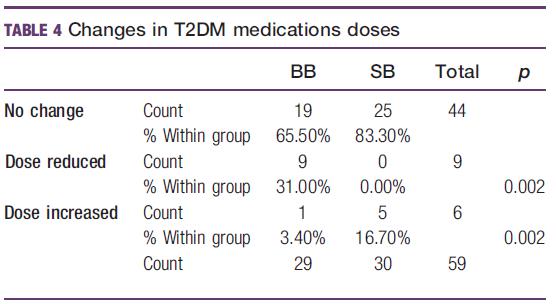 The intervention in this study was smaller: 70% vs. 55% of total calories provided in the first half of the day.  Despite the two interventions being so similar, those who ingested a greater portion of their calories earlier in the day lost more weight and body fat, and experienced greater improvements in glucose and insulin levels:

Intermittent fasting (via skipping dinner) was better than grazing (Kahleova).

And all of these things were, for the most part, relatively independent of “Eat Less, Move More.” #NutrientPartitioning

This may be unpopular, because skipping breakfast is more convenient for many people, but the consistency of these findings across a wide range of diets and study designs suggests, collectively,

For more on alternative meal frequencies, see The Pocket Guide to Intermittent Fasting.