A historical argument against caloric equality 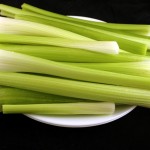 As early as 1932, Lyon and Dunlop recognized that the calories from as little as one slice of bread every day could result in pounds of fat mass gained every year.  For whatever reason, this doesn’t happen to lean people; so they decided to study the effect of different diets on obese subjects in a metabolic ward at the Royal Infirmary.

If they could only see how much times have changed!  (this is a hotly debated topic.)

They next tested if all calories were created equal (this is where it starts to get interesting).  They found that low carb (40 g/d) with high fat or high protein resulted in the most weight loss (weight loss of 205 and 183 grams per day, respectively).  Furthermore, high carb (120 g/d) with low protein or low fat resulted in the least weight loss (122 and 49 grams per day, respectively).  Weight loss: LCHF > LCHP > HCLP > HCLF.

They cleverly recognized that water weight could at least partially explain these differences, with which I agree.  The other part most likely reflects increased metabolic rate, e.g., by a high protein or  high fat diet.

24 years later Kekwick and Pawan set out to determine if “a calorie is a calorie” with a battery of different diets, and came to a similar conclusion.

Calorie intake in relation to body-weight changes in the obese (Kekwick and Pawan, 1956) 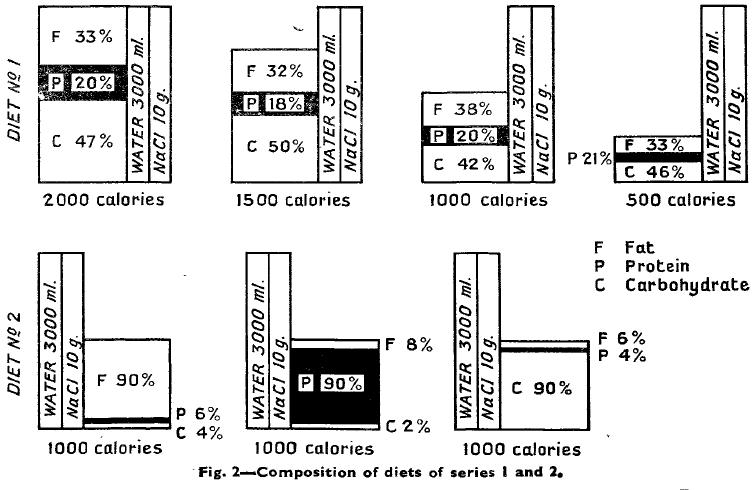 The most dramatic differences in weight loss occurred when their obese subjects were given 90% of calories from either fat, protein, or carbs (the bottom row labeled “DIET No 2” in the chart above). 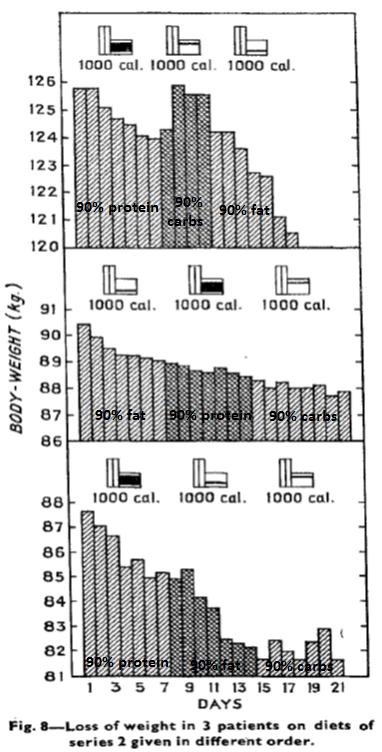 (yes, I love the original manuscript.)

Loss of water weight was proportional to the loss of body weight: 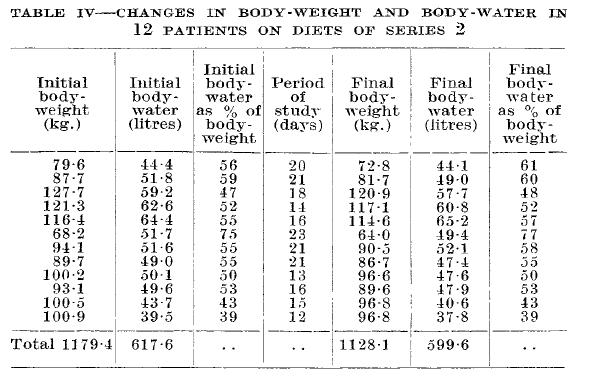 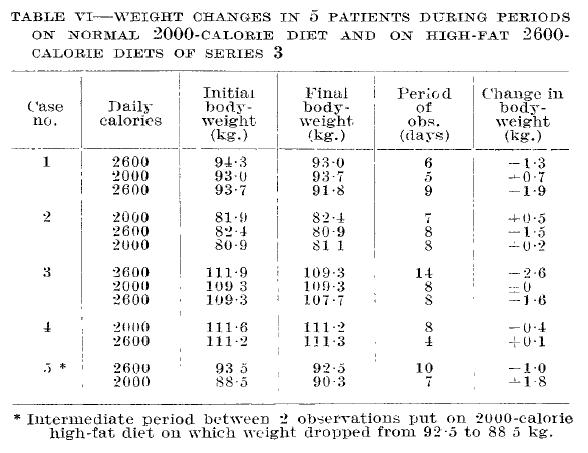 In each case, more weight was lost on the higher calorie high fat diet relative to the lower calorie high carb diet.  More of the weight was water, yes, but not disproportionately so.  I reckon the difference was due to the impact of different diets on metabolic rate (i.e., The Laws of Energy Balance -WSL).

When trying to figure out why weight loss occurred out of proportion to calorie intake, or why all calories aren’t created equal:

Strike one.  Fecal nitrogen and fat couldn’t explain the differences.

throwing in the towel so soon?

But a calorie isn’t a calorie when macronutrients are changed.  High fat diets consistently caused more weight loss than high carb diets under a wide variety of calorie intakes, even when calories were higher on the high fat diets (series 3).

This isn’t due to water weight, which amounted to roughly 40%, or malabsorption.  Food affects metabolic rate, and The Laws of Energy Balance are maintained.