For a long time, the melanocortin system was basically thought to control the color of skin and hair.  It still does, and many redheads are redheaded due to polymorphisms in one of the melanocortin receptors.

Fast forward to 2015: to make a long story short, melanocortins are HUGE players in circadian biology. 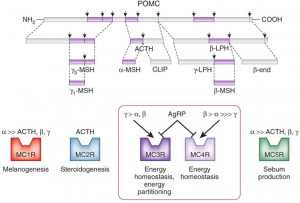 Exhibit A. Hints that led the researchers to suspect circadian rhythms are involved.

To be clear, impaired glucose tolerance is not good during meal times (which is approximately when this is occurring)… it’s like humans carb-loading right before bed lol 😛 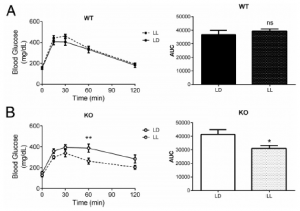 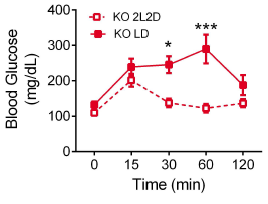 So it’s not the total amount of light exposure, but rather something more nuanced — they require either more light, or less prolonged darkness… 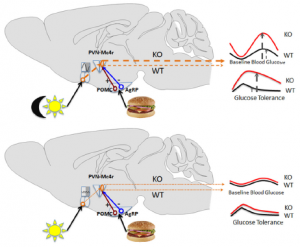 Hear me out: maybe they’re [genetically] locked into some sort of circannual summer-mode, and 12 hours of darkness is too much for their set point… so when the nights are shortened by manipulating light, they’re back ‘in sync’ with the environment.  I could be wrong here, but seasonal leptin resistance (and glucose intolerance) develops with a shortening photoperiod (autumn);  12 hours of darkness is supposed to be the “normal” (spring?) condition for mice, but leptin resistant mice see it as “prepare for hibernation” instead of “summer is on it’s way.”  Thus, a super-powerful zeitgeiber is required for these mice to sense their environment.

What do you think?

Take-home message?  Some people can get by with blue blockers

at night and light boxes

in the morning… but if your circadian rhythms are bollixed to begin with, you may need to avoid all tech at night and get some real sun in the morning.  And be mindful of meal timing.  Super-powerful zeitgeibers.

Exhibit B. leptin, melanocortins, or obesity per se?

MC4R KO mice are “genetically obese;” the control wild-type mice aren’t.  So the authors tested whether this was an effect of obesity per se by assessing glucose tolerance in LD and LL in two other models of obesity: 1) ob/ob mice, which completely lack leptin (figure A); and 2) diet-induced obesity (“DIO,” figure B). 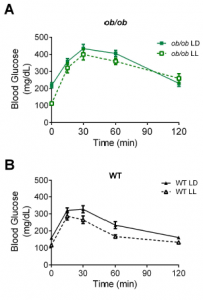 The researchers concluded that it wasn’t obesity per se, but specifically MC4R deficiency because the results weren’t statistically significant. However, it looks like both models showed modest improvement in LL, and fasting glucose in the leptin-deficient ob/ob mice plummeted by about 100 points…

How can this be reconciled this with the authors’ conclusion (based on legit statistical analysis)?  All three models (MC4R KO, ob/ob, and DIO) are leptin resistant.  The effect is weaker in ob/ob and DIO because at least they still have intact MC4R, and maybe leptin isn’t the only input into this system…

.  And I believe this study is only just beginning to dissect some of the underlying neurophysiological circuitry.

I also suspect circannual implications here, and these mice wouldn’t reproduce at seasonally appropriate times or just be easily predated, because circadian disruption impairs survival in the wild.

These findings strongly support an interactive role of leptin and the environment in regulating energy metabolism: screwing with either of the former disrupts the latter.

Angiotensin and vasopressin, two hormones that regulate blood pressure, have also been shown to be big players in circadian rhythms… and now this:

…ok, so maybe that “i knew it!” was a bit preemptive, but the links are starting to come together.  Pickles, anyone?