…just read that huge disasters, ranging from Exxon Valdez to Chernobyl, may have been due, in part, to ignorance of basic principles of circadian rhythms.  Gravitas.

The master circadian clock, or central oscillator, resides in a region of the brain known as the suprachiasmatic nucleus (SCN). Disrupting the SCN causes circadian arrhythmia and an inability to entrain to LIGHT but not FOOD (Marchant et al., 1997). Location of the peripheral oscillator is somewhat controversial, but may be in the dorsomedial hypothalamus (DMH). Global deletion of the clock gene Bmal1 causes circadian arrhythmia; restoration of this gene in the SCN restores the ability to entrain to LIGHT but not FOOD, and restoration in the DMH does the opposite (Fuller et al., 2008).  Optional background reading on circadian entrainment HERE.

On to the epic works of DeCoursey et al., which comprise some of the craziest experiments in circadian biology.

First, they induced circadian arrhythmia in cute little Antelope Ground Squirrels by disrupting the SCN (central pacemaker).  This is a relatively common technique in the field. 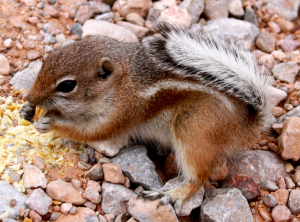 then… they put ’em back into the wild to let Mother Nature take her course!  (THAT’s why I think it was crazy.) 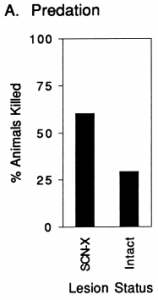 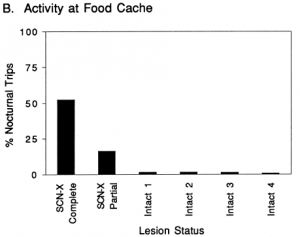 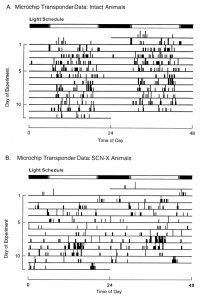 Importantly, there was no attempt to entrain these animals with MEAL timing, which is theoretically still functional in these animals… and this may have saved their lives.  Maybe predation was simply due to increased activity at night, maybe they weren’t able to outsmart predators… in any case, circadian arrhythmia = no bueno. 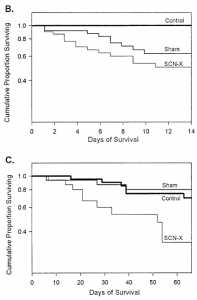 The top figure is cumulative survival during the first 15 days; the bottom figure is survival days 15-80. The take-home messages are: 1) getting your brain drilled into is pretty rough (top figure); and 2) circadian arrhythmia is significantly worse (bottom figure).

They also assessed nightly behaviors and found that even arrhythmic animals who didn’t leave their den at night were restless, which may have alerted predators to their location via sound, vibrations, or olfaction.

Another reason why predation was so bad in the first 15 days in arrhythmic animals, as speculated by the authors, was that “re-settlement” is an issue with this animal model.  Besides crappy sleep (restlessness) and increased nocturnal activity, some of the animals simply weren’t accepted back with their families 🙁

An SCN lesion is clearly worse than conditions that induce circadian arrhythmia in humans.  LIGHT and FOOD are daytime phenomena.  In modern times, both are easily disrupted by technology, culture, lifestyles, habits, etc.  It’s easy to play on smart phones and watch TV, and convenient to skip breakfast while enjoying big dinners long after sunset… but these disrupt circadian rhythms.  Will it cause you to be predated?  Probably not by a wild animal, but rather by one of many modern diseases like diabetes or even cancer.

(in the morning) and blue blockers

I found these studies quite compelling because they took place in the wild, with the hardest of hard endpoints.  Not activity monitors or food anticipatory behavior… SURVIVAL.  Animals with SCN lesions can survive quite long in captivity, where evolutionary survival adaptations are largely unnecessary.  But in the wild, robust circadian rhythms are vital.

And unlike some factors (like heredity), we have some control over the entrainment of our circadian clocks… not to be taken lightly.

And here’s a great video by a pioneer in circadian biology research, Dr. Joe Takahashi: