More on why breakfast in the morning, with light onset is important to avoid circadian desynchrony. 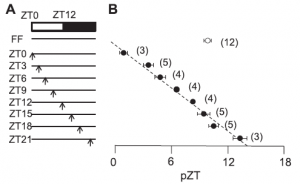 ZT0 = “zeitgeber time 0,” or “lights on.” pZT indicates a phase shift coinciding almost exactly with meal timing. Mice normally eat at night, but this doesn’t stop their peripheral clocks from entraining to the day time if that’s when their fed.

This study took it to the next level: they fed 2 meals per day, varying in size, time of day, and duration between meals in almost every conceivable combination.  Actually, it was a quite epic study… some poor grad students working, literally, around the clock, for months…

I feel guilty summarizing so much research so briefly, but for the sake of our sanity, the major finding of this part was: 1) bigger meals entrained peripheral circadian clocks better than smaller ones; and 2) they became more entrained to the time of the biggest meal.

N.B. regardless of peripheral circadian clock timing, the central clock is entrained by light in the morning… ergo, bigger meals should be timed earlier in the day.

Experiment 2. They next tested various fasting intervals. For example, feeding meal #2 either 6, 12, or 18 hours after meal #1.

They showed that meals consumed after longer periods of fasting were more powerful at entraining the peripheral clock, which became entrained to the time of the meal after the longest fast.  For example, consider these 2 relatively extreme scenarios:

In scenario A, breakfast occurred after the longer fasting window (16 hours vs. 8 hours), and the peripheral circadian clock phase shifted earlier, in line with breakfast and LIGHT, in the morning.  In scenario B, dinner occurred after the longer fasting window, and the peripheral clock phase shifted later, in line with dinner in the evening.

Remember: regardless of the peripheral circadian clock timing, the central clock is entrained by LIGHT in the morning… ergo, a longer fasting period should occur prior to breakfast in the morning (ie, scenario A).

Combine the findings from experiments 1 & 2, and you get: a big breakfast, early dinner, and the longest fasting interval between dinner & breakfast.  All of these findings are incredibly consistent with avoiding Afternoon Diabetes.

Humans aren’t big mice.  Mice are nocturnal, which means they eat at the night.  FACT. 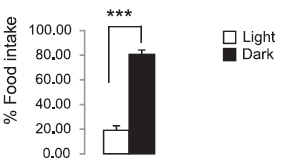 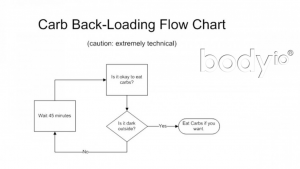 Before you come at me, claiming that “skipping breakfast, hunting all day, and feasting at night” is how our ancestors must have evolved…

@CaloriesProper good for that guy. He appears not to credit HG with thinking ahead. Kind of an essential survival trait I deem.

I, for one, think Hunter-Gatherers were capable of planning ahead: having leftovers? that could be breakfast (in the morning).  And even if this wasn’t the case, and every HG who ever existed only had big dinners… there’s a theory that these folks were very good at fattening due to intermittent periods of famine/starvation.  In fact, it likely saved their lives during periods of low food availability.  Do you think they would only eat at night if it wasn’t the best way to store calories as adipose?

“Why do people think HG was such a retard?” -Craig Zielinski