The humble title doesn’t come close to the media’s interpretation, which included such deluded phrases as “A chocolate a day to get slimmer?” and  “Is chocolate the secret to a skinny waistline?”

While a chocolate bar isn’t the most nutritionally offensive dessert, it is neither a panacea of health nor a cure for obesity.  Chocolate 101: milk chocolate is loaded with sugar; dark chocolate usually has a little less sugar, it’s “dark” because it has less milk and more chocolate liquor (no, not that kind of liquor); unsweetened chocolate has no added sugar and is usually reserved for baking.  If you think you’re having a genuine chocolate craving, you, like many others, may have been beguiled by the serpent sugar. 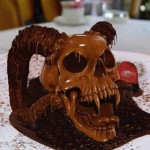 want proof? next time you’re in the mood, try some high-cocoa unsweetened chocolate

; it’s the purest chocolate that chocolate can be.   While it can be rich and delicious in its own unique way, even the fanciest stuff tastes little like “chocolate”

And this “high-cocoa unsweetened chocolate” (shown on the bottom of the figure below) is probably the only kind that can be remotely called “healthy.”  The chocolate mentioned in this study was probably a blend of this, milk, and a ton of sugar (aka “milk chocolate”).

is less sweet, higher in fat, and has more health-promoting compounds than any other type.

Back to the groundbreaking study for a moment:

On the other hand, a much more convincing study specifically on dark chocolate:  Short-term administration of dark chocolate is followed by a significant increase in insulin sensitivity and a decrease in blood pressure in healthy persons (Grassi et al., 2005 AJCN)

These lean (~140 lbs) healthy subjects were given, in a randomized crossover study, 100 grams (~3.5 ounces, 480 kcal) of dark or white chocolate for 2 weeks.  Dark chocolate contains all the health-promoting compounds (e.g., flavonoids, like those found in red wine and green tea); white chocolate has none.  The subjects were apparently prescribed a 1,400 kcal/d diet (semi-starvation) but didn’t lose any weight over the entire period.  So unless they were bedridden, this is probably not true.  But I’ll admit, the effect on insulin sensitivity was quite remarkable: 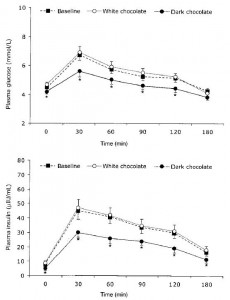 White chocolate (open circles) was health neutral or even slightly modestly detrimental (all of the sugar, none of the flavonoids).  But dark chocolate profoundly enhanced insulin sensitivity-

(granted, this was probably the healthiest dark chocolate in the world…) 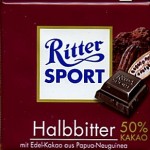 Although this was a high quality study design (randomized crossover), I will [stubbornly] wait for independent confirmation before making any heretical paradigm shifts.

In contrast to the first study, this study didn’t use chocolate per se, but rather polyphenol-rich high-cocoa solids which is probably more similar in flavonoids to high-cocoa unsweetened chocolate.

Again, the results were fairly outstanding:

Consumption of the regular (low-polyphenol) chocolate induced a pro-diabetic phenotype (increased glucose & insulin; decreased HDL), while the super-chocolate was potently anti-inflammatory (reduced CRP and increased HDL).  While these findings are indeed impressive, sorry, but the inconsistent effects on insulin sensitivity still give me pause (markedly effective in the Grassi study with dark chocolate vs. no effect at all in the Mellor study with polyphenol-rich cocoa solids).

In conclusion: milk chocolate candy bars are still on the list of “clearly unhealthy foods,” especially for anyone with metabolic syndrome or excess body fat; rare European dark chocolate

is temporarily classified as “probably not harmful;” and high-cocoa unsweetened chocolate

is upgraded to “possibly beneficial.”