While proponents of the Paleo diet take a page out of nutritionism‘s book and argue it’s about food choices, not macronutrients, my reductionism mandates inclusion of a comparative breakdown by protein, fat, and carbs.  In a recent publication, Lindeberg (a Paleo pioneer) compared Paleo to the Mediterranean diet in a cohort of CHD patients (Lindeberg et al., 2007 Diabetologia).  To make a long story short, Paleo came out on top in a variety of endpoint measures after 12 weeks. 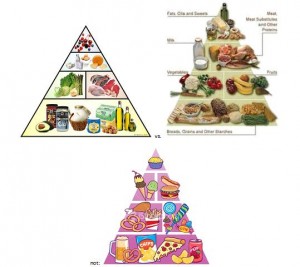 As such, both groups lost weight; slightly more on Paleo but this was probably due to reduced caloric intake (not uncommon for Paleo dieters; see below and also Osterdahl et al., 2008 EJCN):

But the benefits of Paleo were much more robust WRT insulin sensitivity, which was markedly improved on Paleo but not Mediterranean.

With a 4% weight loss, why didn’t glucose tolerance improve in the Mediterranean dieters?  … weight loss is almost always accompanied by improved glycemic control…   The biggest difference in “foods” consumed by the two groups was cereals: 18 grams per day on Paleo vs. 268 on the Mediterranean diet… over 14 times more!  As I’ve discussed at length with gravitas, a high intake of cereals (aka grains aka fibre [in the figure below]) does not bode well for insulin sensitivity, inflammation, and outright all-cause mortality: 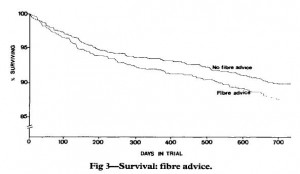 As such, Paleo does well to exclude grains.  Furthermore, Paleo is higher in protein and fat and lower in carbs- all good things.  A more interesting analysis showed that waist circumference (visceral fat) was associated with grain intake even when controlled for carbohydrates.  In other words, the detrimental impact of whole grains goes beyond their intrinsic carbohydrate content. (whole grains … insulin resistance … visceral fat)

Back to those calorie data for a moment, given that they were probably just as important as cereal exclusion in determining the results.  Why did Paleo dieters spontaneously eat so much less?  In a follow-up publication, Jonsson and colleagues assessed leptin and satiety in both groups (2010 Nutrition & Metabolism) and showed that despite eating less and losing more weight (things that should increase hunger and decrease satiety), Paleo actually did the opposite (hint: something to do with whole grains, perhaps?).

While the Paleo meals were smaller (5th and 6th rows) and contained fewer calories (3rd and 4th rows), they were just as satiating as Mediterranean diet meals (7th through 9th rows), leading the authors to conclude Paleo is more satiating calorie-for-calorie and pound-for-pound.  And if that isn’t enough, Paleo dieters also experienced a significantly greater reduction in leptin! (probably caused by their reduced food intake and body weight loss)  While the general consensus is that such a change in leptin should enhance hunger, as discussed previously I think lower leptin in this context reflects enhanced leptin sensitivity, which also helps to explain the improved insulin sensitivity.  Last but not least, WRT the Mediterranean diet I suspect reduced calories explains the weight loss, but the abundance of whole grains explains the blunted glycemic improvements.  (hint: whole grains … leptin resistance … insulin resistance) … (whole grain exclusion … leptin sensitivity … insulin sensitivity)

might be considered “Atkins-lite,” probably not “the next big thing,” definitely not “fail.”