Almonds have been considered a super-food for as long as I can remember.  And in accord with my level of interest in super-foods, I’ve never cared.  Today, however, almonds became interesting. 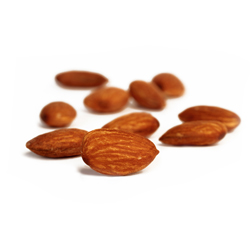 have, well, 100 kilocalories).  This measurement of a food’s energy content takes into account the amount of heat produced when it is electrocuted in a bomb calorimeter as well as its digestibility.  The importance of taking both of those things into consideration?  Marshmallows and tree bark produce a lot of heat when they burn.  Unlike marshmallows, however, a tree bark smoothie wouldn’t give us any energy because we can’t digest wood.  This is further complicated because digestibility of a food consumed by itself can differ when it’s eaten with a meal.

Usually, and unlike carbs and protein, the digestibility of fat is impeccably high and unvarying.  Almond oil

, however, might be an exception in more ways than one.

This was a ridiculously complicated study designed to determine the calories in almonds.  It was a three-way crossover with 18-day feedings of 0, 42, or 84 grams of almonds per day (0, 1.5, or 3 ounces per day).  The researchers gave the volunteers ALL of their food for the entire study, and in exchange, the volunteers gave the researchers the byproducts (urine, feces) for the second half of each feeding period.  This is already an expensive and extremely  labor-intensive study, but I think they were trying to do more than just quantify the calories in almonds; I think they were trying to stick-it-to-the-man.

N.B. the almonds were eaten with normal meals.  The diet was normal.  There are no tricks up my or the researcher’s sleeves.  And I’m honestly fascinated by Table 2. 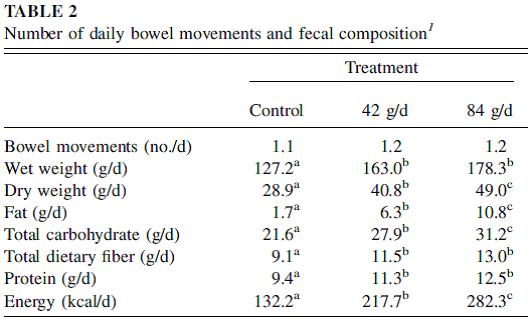 Yes, the authors decided; and I agree.  And I think this sticks-it-to-the-man.  Perhaps this is the source of almond weight loss lore (?)… imagine the fastidious dieter who weighs out 3 servings of almonds for their daily snack, accounts for the 513 kilocalories in their food diary (but is really only getting 357 kilocalories), and they lose weight…  and those 100 calorie packs

OK, but just out of curiosity which calories aren’t absorbed?  Are almond calories poorly absorbed, or do almonds block the absorption of other nutrients? 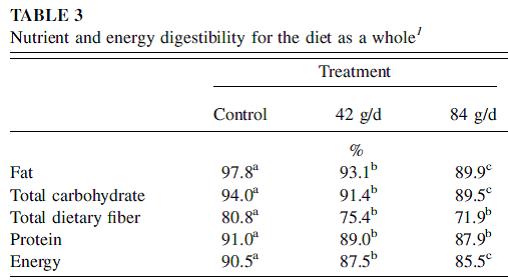 The first two methods didn’t release a lot of almond fat, but the third did, by a little.  As opposed to crushing or chewing, after actual digestion, gut microbes degrade the crunchy cell walls to release the almond fat contained therein.  Unfortunately, however, fat absorption is very inefficient in the large intestine (where this is all happening), which is why the almond fat is either fermented or excreted.

So at this point we’ve got more fat, but also more carbs and fiber from the almond cellular structures making their way into the large intestine (on a high almond diet)… what do the resident microbes have to say about all of this?

A lot, according to a series of studies by Mandalari and his robotic gut simulator  (Mandalari et al., 2008).

Unless you are seriously constipated, the bacterial changes after 24 hours of fermentation are irrelevant.  Looking at 8 hours, which is probably more physiologically relevant, gives us this:

Table 2 (above) is, in a word, perplexing.  Whether or not Mandalari set out to stick-it-to-the-man, he sure did (unless that is just a thing with almonds [?]).  Similar to FOS, almonds had a relatively potent bifidogenic effect.  This is not surprising because of almond’s high fiber content.  What was surprising, however, was that this is completely absent in defatted almonds.  The fiber is the same in almonds and defatted almonds, therefore there is something uniquely magical about almond fat and the long series of unfortunate unlikely events that must occur in order for the bifidogenic effects of almonds to manifest. 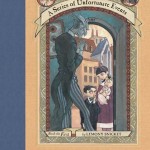 Back to the Novotny (Atwater) study for a moment.  48 grams (1.5 servings) of almonds

only provide about 5 grams of fiber, but it increased stool weight by almost half.  Fiber is known to increase “regularity,” but the effect of almonds is pharmacologically disproportionate to it’s fiber content.

According to a review by Ahmad (2010), almond oil improves bowel transit time and reduces the symptoms of irritable bowel syndrome.  Not whole almonds.  Not almond fiber.  Almond oil.  And injecting it might even cure IBS (don’t try this at home; Sasaki et al., 2004).

Is it time for a paradigm switch?  Will almond oil open the door for other fats to be researched for bona fide prebiotic properties, akin to inulin