Should almonds be upgraded from “snack” to food?  Should almond flour be used in place of some or all white flour?  Yes and yes, IMHO. 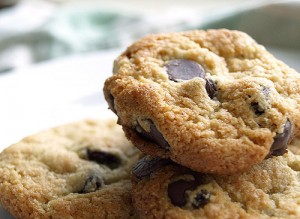 In 2007, Josse and colleagues did a quick-and-dirty study on almonds and glucose tolerance.  They fed a group of volunteers 50 grams of carbs from white bread and either 0, 30, 60, or 90 grams of almonds and then measured blood glucose over the following two hours.  “Quick” because they probably had almonds

and bread in the refrigerator, and glucometers

in their desk drawers; “dirty” because there were a lot of uncontrolled variables; for example: fiber, protein, and fat content of the test meals differed wildly:

In a proper study, they might have tried to feed everyone the same amount of fiber, protein, and fat, because each of these is known to affect blood glucose.  In any case, the result was pretty cool: 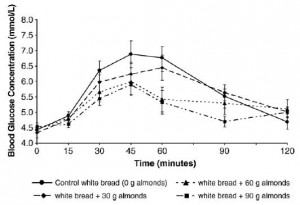 dose-dependently blunted the blood glucose response to the test meal.  Conclusion: almonds = anti-hyperglycemic.  But almonds are complex lil’ things; they’re made of protein, fat, fiber, and a lot of nutrients; so what’s responsible for all the anti-hyperglycemic effect?  this post is not simply an academic pursuit; indeed, almond flour

are commercially available, affordable, widely used, and are comprised of different fractions of the almond.  So Mori and colleagues decided to study.

In this excessively high quality study, the effect of 4 different types of almond preparations on glucose tolerance was assessed.

Basically, the participants were fed a breakfast of OJ and Cream of Wheat with the equivalent of 33 almonds (42.5 grams) for a total of 75 grams of carbs, and blood glucose was measured over the next 2 hours.

Notable nutritional differences between the almond preparations:  they all contain a similar fat content except for the defatted almond flour; whole almonds and almond butter have 2-3 times more fiber than almond flour and almond oil; almond oil has half the protein as all the others.

Whole almonds, almond butter, and almond oil, on the other hand, all blunted the glycemic response.  Defatted almond flour, which only really differs in its lack of almond fat, did not.  Thus, according to last post, almond fat is a potent bifidogen (i.e., good for gut bacteria); and now we see it’s also responsible for the anti-hyperglycemic effect of almonds.  These two effects are probably unrelated, however, as any effect on gut bacteria will take significantly longer than a few hours as the almond fat hasn’t even reached the large intestine by then… (the anti-hyperglycemic effect is evident within 2 hours; the bifidogenic effect noted by Mandalari was 8-24 hours).

OK, almond fat slows the absorption of glucose, so what? this is not exciting… it’s common among most fats- “dietary fat reduces the glycemic index of food.”  But this has a greater implication: one could alternatively conclude that almond flour’s lack of fiber was at fault, as dietary fiber is also known to slow glucose absorption.  However, almond oil, which has even less fiber than defatted almond flour, was also anti-hyperglycemic.  So it’s not the fiber (… perhaps because almond fiber is predominantly insoluble).

With regard to all-things-almonds: almond fat, not almond fiber, is anti-hyperglycemic and bifidogenic (what can’t it do?). 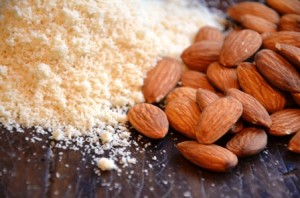 (with whatever), and regular [non-defatted] almond flour

(for baking?).  WRT the latter, get all the benefits, a boost for the gut microbiota, and significantly fewer carbs than with white flour (while actually attenuating the glycemic impact of said white flour).

An argument for almond flour: most baked goods are made with white flour.  These foods are predominantly empty calories, the bane of human health and well-being.  Substituting almond flour for white flour is one way to decrease the emptiness of those calories, and thus of life itself (it’s gluten-free too).