This is a review of Netrition’s “highest rated” bars.  Important notes about this category: these are not necessarily “new” protein bars, or even the bars everyone buy (“best sellers”).  They are the bars everyone who votes like the most.  They’re not the healthiest either… but some come close. 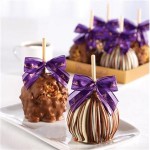 First on the docket, overall winner:

Labrada’s Cookie Roll… winner, despite not having the most or best protein.  But they taste really good, probably because they have the second highest amount of real sugar (15 grams).  They are loaded with vitamins, which is neither a positive nor negative, as protein bars are valuable for their protein; nobody relies, or at least nobody should rely, on protein bars for comprehensive nutritional adequacy.  They are a convenient source of protein, nothing more.

#2 is Chef Jay’s Brownies, which have even less protein than Labrada’ Cookie Roll (18 grams).  I’m guessing they rank so highly because of taste alone: 22 grams of real sugar, which is only slightly less than a Snickers bar (28 grams).  This is not a health food or even a healthful dessert.  And they don’t come anywhere near my threshold of a good carb:protein ratio (which should be less than 2)… indeed, these would be more accurately classified as sugar bars.

MetraGenix came in 3rd with an astoundingly low amount of carbohydrates (16 grams) and a freakishly low carb:protein ratio (0.5).  These bars don’t taste very good, but their protein quality is high (whey), so I’m assuming people like these for their nutritional value and the fact that they give you more protein per dollar than any other bar on the list.  And that’s saying something given that it’s an expensive blend of protein.  +1 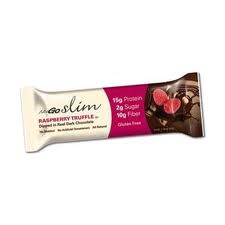 With regard to the “low carb” bars, NuGo came out on top.  While they lose a point by relying on soy protein, they gain one by having more fiber than any other on the board (10 grams) (although this is not nearly as much as that found in Quest bars [18 grams]).  Furthermore, this isn’t just any fiber, it is the super-fiber inulin.  They lose a point for having second highest carb:protein ratio (1.5) but they gain one for having only 2 grams of sugar.  Not a bad value, but nothing to write home about. 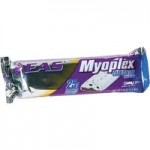 Myoplex came in second with the most protein, highest quality protein, and least carbs of any bar on the list.  And they don’t taste like dirt, no doubt due to the inclusion of 18 grams of sugar alcohols (which don’t contribute to the total carb count in my book since they don’t trigger an insulin response).  They’re loaded with vits, but this doesn’t matter.  2nd lowest carb:protein ratio (1.04), and they’re a pretty good value. +1 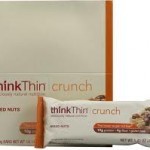 ThinkThin bars rely solely on soy protein and are made out of, among other things, peanuts, almonds, and cashews.  So while they might have a lot of omega-6 fats from peanuts, they have 2 super-healthy-gut-promoting attributes: 1) almonds; and 2) inulin.  ThinkThin, if you’re reading this, if you used better protein and didn’t cost so damned much, you might have ranked #1.  There’s no excuse for this pricing; these bars use the cheapest protein.  P.S. if you want to try ThinkThin, “Mixed Nuts” is the healthiest flavor; many of the others are bona fide candy bars.

I have nothing against sugar alcohols (Myoplex

), and healthy super-fiber is always a plus (NuGo

).  High protein is why we are buying these bars (Labrada

), and it’s nice when it’s high quality protein  too (MetraGenix

).  And I’d rather get my sugar from real brownies than Chef Jay’s

P.S. Here’s that list again if you want to check out other reviews: