More on physical performance and ketoadaptation

The various studies on how low carbohydrate diets impact physical performance are very nuanced.  Here’s what I mean by that.

In this [pioneering] study, obese patients were subjected to a variety of performance assessments in a baseline period, then after 1 and 6 weeks of weight loss via protein-sparing modified fast

(1.2 g/kg ideal body weight from lean meat, fish, or fowl; probably around 80 grams of protein/d, 500-750 kcal/d). They lost a lot of weight, 23 pounds on average, two-thirds of which was body fat. There was no exercise intervention, just the performance assessments.

Highly trained endurance athletes followed a high fat (53% fat, 32% carbs) or high carb (17% fat, 68% carbs) diet for 5 weeks in a randomized crossover study. In contrast to Phinney’s study, these participants were: 1) highly trained; and 2) exercised throughout the study.

Maximal power output and VO2max during a similar ‘time to exhaustion’ test was similar after both diet periods.  Same for total work output during a 20 minute ‘all-out’ cycling time trial and half-marathon running time.  Muscle glycogen was modestly, albeit statistically non-significantly lower after ketoadaption; however, ketoadapted athletes relied on a higher proportion of fat oxidation to fuel performance

as indicated by lower RQ at every level of exercise intensity: 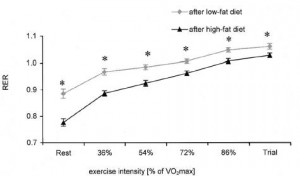 Again, this is the essence of ketoadaptation. Physical performance as good as or better using fat and fat-derived fuels.

One reason Phinney’s glycogen-depeleted ketoadapted subjects may have done so well is their reliance on ketones (probable) and intramyocellular lipids (IMCL) (possible).  In Vogt’s study, IMCL increased from 0.69 to 1.54% after ketoadaptation…

This study differed from the previous two in several significant ways.  For starters, peak power output declined in both groups, slightly more so in the high fat group (-10% vs. -8%).  Furthermore, RQ didn’t wasn’t significantly lower during this test in the high fat group, which possibly suggests they weren’t properly ketoadapted.  In Phinney’s study, the large energy deficit ensured ketoadaptation; this study lacked that aspect, somewhat more similar to Vogt’s, although unlike Vogt’s, these participants weren’t athletes which presumably makes ketoadaptation more difficult.

There are many factors at play… I wasn’t kidding when I said these studies are very nuanced!

These were ‘elite artistic gymnasts,’ who could likely beat you in a race running backwards.  The ketogenic phase consisted of 55% fat and much more protein than the control phase (39% fat; protein: 41% vs. 15%). The significantly higher protein content was modestly offset by slightly more calories in the control phase, which reduces the amount of protein required to maintain nitrogen balance.

In this study, performance was, for the most part, ‘maintained,’ with relative increases in a few of the tests; eg, the “legs closed barrier.”  Changes in body composition were more robust: significantly reduced body fat and increased lean body mass after 30 days of ketogenic dieting (with their normal exercise routine). 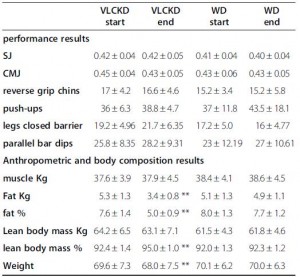 The major confounder in this study was the use of an herbal cocktail only in the ketogenic diet group; despite this, the results are largely in line with the other studies.  For more on this study, see here.

Exhibit E. the most dramatic one to date: Sawyer 2013

Please see here for the details, but in brief, strength-trained athletes showed improvements in high intensity exercise performance after only 7 days of carbohydrate restriction.  The nuances of this particular study are discussed more here.

Collectively, these studies show that physical performance in both endurance and high intensity realms does not always suffer, can be maintained, and in some cases is improved by ketogenic dieting.  Important factors are duration (to ensure adequate ketoadaptation), energy balance, and regular physical activity (athletes and regular exercisers can adapt to burning fat much quicker than sedentary folks).