“If a dog team is worked hard daily for two weeks and fed with fresh fish caught under the ice and frozen without opportunity of becoming high, that team will lose weight and show definite signs of wear and tear.  If the team is fed with hung or high fish, they will be as good at the end of that time as the start, and often will have put on a little weight.”

-quote from a cool book Duck Dodgers sent me about digestive enzymes.

“High” doesn’t mean psychedelic, but rather letting the meat sit for a time so as to allow it to tenderize, or “pre-digest.”

One study showed that protein breakdown, measured by desmin degradation, increased by roughly 33% if the meat was removed from the cow 24 hours after slaughter (“conventional”) instead of immediately after (“rapid”) (King et al., 2003). 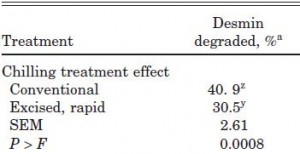 Another gem from the enzyme book:

“According to the law of Adaptive Secretion of Digestive Enzymes, organisms eating these partly digested ‘high’ foods will need to secrete fewer enzymes.  And the energy so saved may well be the very ingredient explaining the stamina and high energy levels experienced by Eskimos and other peoples on these rations…

The secret of the good health of the carnivorous Eskimo is not that he eats meat, but that he forbids his personal enzymes to digest all of it…”

The theory is that one might benefit by letting meat age a bit as opposed to eating it while it’s still warm…?  this doesn’t seem to be what Jeff Leach found during his stay with the Hazda – the hunters would eat some of their kill fresh and raw, on site.  Maybe it has to do with the environmental factors like temperature, the type of animal, or if they’re hungry?  Another point of incongruity, as Duck mentioned here, fresh raw meat may retain some proteolytic enzymes which help you digest it.  So there’s no wrong way to do it? …fresh and raw meat may be easy to digest because some of the meat’s own enzymes help out; aging also helps to tenderize it.  And simply letting it rot seems to work for Derek Nance.

Reminders: still looking for a pair of hot blue blockers? Carbonshade and Spectra479 are offering 15% off with the coupon code LAGAKOS. And Kettle & Fire is offering 20% off of their delish broths/stocks HERE.

In any case, this is somewhat in line with a “Paleo” dietary recommendation: avoid foods high in protease inhibitors (eg, some grains).

Or just cook it: in this study, rhea muscle meat was frozen either immediately after slaughter, or 5 or 28 days of aging at 4C (Filgueras et al., 2011).  In vitro digestibility was assessed in cooked and raw samples by adding a cocktail of gastrointestinal proteolytic enzymes. 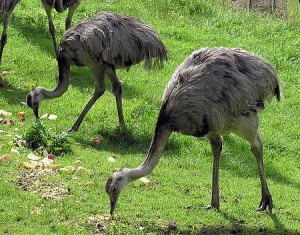 The Rhea, a flightless bird which resembles an ostrich.

As expected, cooked meat was more rapidly broken down: 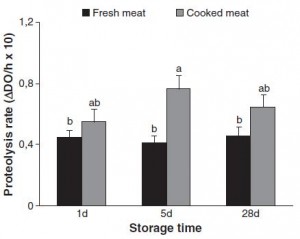 I’m not exactly sure why aging didn’t enhance the rate of proteolysis… for the time being, I’m chalking it up to a nuance of the assay.  Or perhaps the aged meat had indeed underwent some degree of degradation, but the intact proteins still remaining were proteolyzed just as quickly regardless of aging… 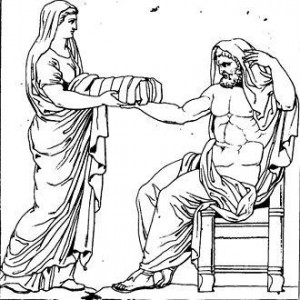 The original Rhea, a Greek Titaness.

And while I’m pretty sure the digestive process in snakes is quite different from our own, or that the food tends to rot (or “auto-digest”) a bit in their gastrointestinal tract, this study was interesting (Boback et al., 2007)  – the researchers compared the thermic effect of feeding rats, intact raw or cooked beef, and ground raw or cooked beef, and showed that, to no surprise, rats and intact raw beef took significantly more energy to digest than ground cooked beef: 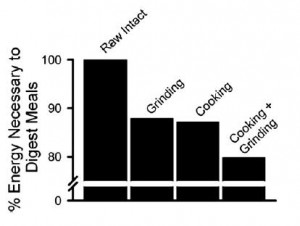 It’s hard to say if this has any relevance for humans, but protease supplementation might help out some who stand to benefit from “the stamina and high energy levels experienced by Eskimos.”

In this crossover study, the participants were assigned to receive protease supps

or placebo and underwent eccentric exercise, which is well-known to induce “delayed-onset muscle soreness” (DOMS), or when you’re really REALLY sore 2-3 days after strenuous exercise, eg, downhill sprints (but they used a much less strenuous form of exercise in this study: forearm flexor

).  The effects of protease supplementation were modest, but statistically significant reductions in strength loss were observed.

In another study, where downhill sprints was the actual intervention, similar results were observed (Miller et al., 2007).  It wasn’t a crossover study, but the exercise intervention was much better.  And here is why DOMS makes you want to stay in bed all day: 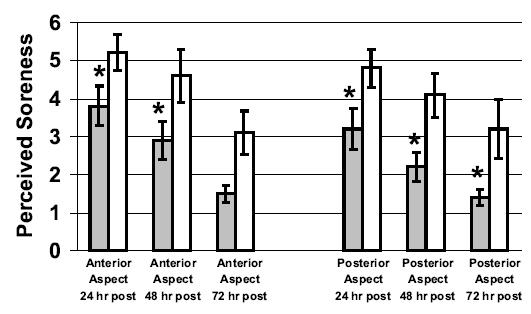 “…And the energy so saved may well be the very ingredient explaining the stamina and high energy levels experienced by Eskimos and other peoples on these rations…”  Most people attribute the benefits of protease supps to anti-inflammation, but who knows, maybe “the energy so saved” is part of this as well.

And at least one researcher thinks it may have to do with the gut microbiota:  “Where do the immunostimulatory effects of oral proteolytic enzymes (‘systemic enzyme therapy’) come from?  Microbial proteolysis as a possible starting point.” (Biziulevicius 2006)

Alternatively, this could also just be another face of the fast vs. slow proteins in bodybuilding culture.  Bollixed.  Ha!