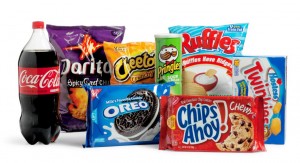 The other was chock-full of complex ingredients and rich in fibre: 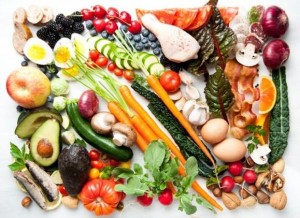 Both diets had similar added vits and mins, and the images above don’t really reflect the actual diets as they did have roughly similar macronutrient profiles:

And just to clarify, the whole food-based “Chow” is the same diet that is used as the control diet in most rodent studies. 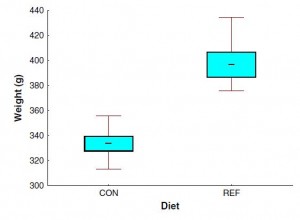 Next, the researchers assessed how many times the rats would press a lever to get a sip of sugar water.  In order to speed things up, food intake was restricted to 25 grams per day prior to the experiment to make them hungry <- red flag number 1.

Due to the higher fibre content of the whole food-based diet, it was less calorically dense (3.02 vs. 3.85 kcal/g), so these rats may have been relatively more calorie restricted (ie, hungrier than the synthetic diet-fed rats).

Results: rats fed the synthetic diet appeared less “motivated” to press the lever for a sip of sugar water.  They were heavier, and this is part of what led to the headlines.

The next experiment was admittedly somewhat clever: the diets were switched for 9 days.  However, nothing changed.  That is, rats that got plump on the synthetic, high-sugar diet still didn’t care much for sugar water even though they were given the low-sugar, fibre-rich diet for the past 9 days.  9 days isn’t long enough to impact body weight, and this is the other part of what led to the headlines. 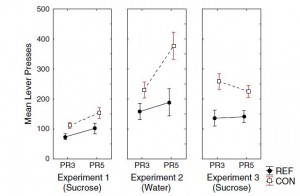 Here’s an alternate interpretation of the results: in experiment 1, the chow-fed rats were hungrier because they were relatively more calorie restricted on the test day (due to the reduced caloric density of the diet, and the fact that both groups were given the same weight of food [25 grams]).

In the follow-up experiment: rats have a difficult time switching from soft chow pellets to hard synthetic pellets.  When they did this, the rats may have been more “motivated” to press the lever because sugar-water calories are much easier than trying to eat the hard synthetic pellets.  And the [heavier] rats who grew up on synthetic food were happy with the more whole food-based, easy-to-eat chow diet, so they didn’t care very much for the sugar-water.

I don’t doubt some of these things may have been at play, but this study seems too confounded to say for sure.  The caloric density and texture of the diets weren’t accounted for.

“Our data suggest that diet-induced obesity is a cause, rather than an effect, of laziness.” –Aaron Blaisdell, lead author.  Again, that conclusion may not be wrong, but it’s not the only possible interpretation.

It just seems to me that the awkward food restrictions imposed on the rats prior to the experiments confounded the results.  I’m not too surprised that during the ad lib feeding portion of the study, the synthetic, sugar-fed rats gained more weight.  But 25 grams of chow has fewer calories than 25 grams of synthetic diet, so the chow-fed rats may have been hungrier which gave the appearance of “more motivated;” this has nothing to do with body weight per se (and it wasn’t addressed by the authors).

After reading the media reports, I guess my qualm is more with the researchers and flawed study design than the journalists, who seem to have been quoting Blaisdell pretty accurately.

From the Latin Post: “Blaisdell, 45, said he changed his diet more than five years ago to eat ‘what our human ancestors ate.’  He indicated he now eats meats, seafood, eggs, vegetables and fruits, while avoiding processed food, bread, pasta, grains and food with added sugar.  As a result, Blaisdell said, he’s experienced dramatic improvements physically and mentally.  ‘I’ve noticed a big improvement in my cognition,’ he said. ‘I’m full of energy throughout the day, and my thoughts are clear and focused.’”

…just my 2 cents on a bollixed rat study.